For a lifelong hip-hop fan, the fact that a rap group is the official "Tonight Show" band is a huge deal 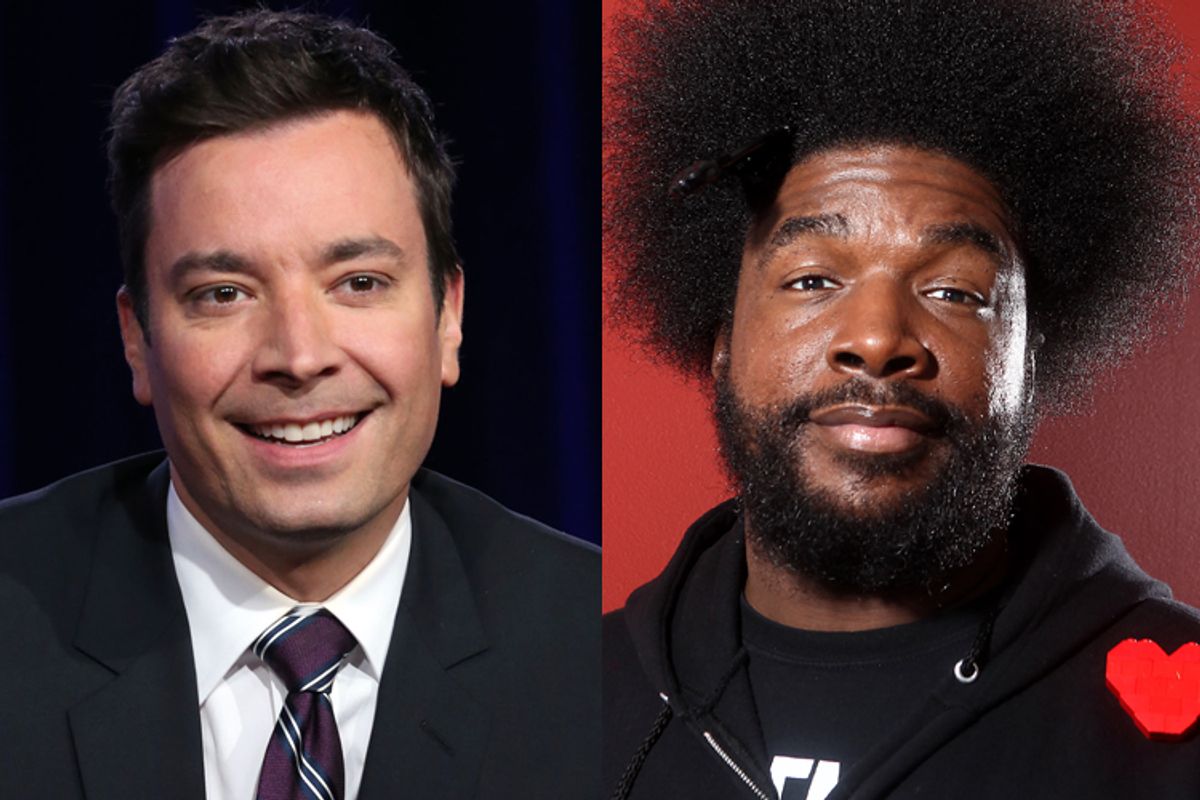 Were I to never watch another full episode of the "Tonight Show" with Jimmy Fallon – which is not nearly as unlikely as it sounds – I would come away from the much heralded new host’s inaugural installment with fairly fond memories and a feeling that the late night institution lies in good enough hands.

I’ve never been a fan of Fallon’s recurring “History of Rap” bit with Justin Timberlake. No disrespect to Fallon or J.T.’s macaw-like lyrical skills, but there’s just something about two white men exalting the history of rap music that seems to me, well, beside the point. Sadly, Fallon and first guest Will Smith’s “History of Hip-Hop Dancing” was not nearly as entertaining. But, even though I scoffed heavily when Smith won the first Rap Grammy in 1988 – um, anyone on the Grammy committee ever hear of KRS-One? X-Clan? – I cannot deny that Smith is as much an iconic figure in hip-hop as my own personal rhyming heroes. As I watched the bumbling dance routine and Smith’s congenial, wholly innocuous turn on the couch, I marveled at the fact that some of my cultural DNA was now permanently ingrained in the “Tonight Show” of all places.

During his humble and gracious monologue, Fallon talked about struggling to stay up to watch the “Tonight Show” at an early age. I, too, remember falling asleep doing homework to Johnny Carson on the TV in my parents' basement. (When he handed over hosting duties to Jay Leno in ’92, I shifted the entirety of my late night devotion to David Letterman.) What I remember even more clearly than watching Carson, however, was the first time I heard the Roots “Distortion to Static” in my homie’s bedroom in Corona, Queens, and debating whether it was live or sampled music.

The fact that a rap group – live or otherwise – is now the official “Tonight Show” band packs an indescribable emotional impact for a lifelong hip-hop head. It’s nothing so simple as, “We have arrived!” I gave up looking for validation in “our” collective, commercial success in the mid-'90s, around the time I failed to see my own reflection in Puffy’s shiniest suit. No, last night’s “Tonight Show” – more so than snowed-in schoolteachers rapping about bad weather or Jay Z chilling with the president – compelled me to, once and for all, fully acknowledge the extent of hip-hop’s mainstream saturation.

U2 was the musical guest last night. And their acoustic performance from the couch, more so than the rooftop show, constituted Fallon’s first – I believe – signature moment as the host of the “Tonight Show” broadcast. The world’s biggest movie star nodded along from the edge of the frame. But even as Bono belted, he could not – would not – exclude the Roots from this moment. He even pulled bandleader Questlove’s name into the song.

The funny thing is: I’m not even the biggest Roots fan. In their heyday I leaned more toward Wu, De La or Black Moon. These days, it’s Homeboy Sandman or Open Mike Eagle. But this is the “Tonight Show.” It’s meant to be sort of innocuous. It’s for absolutely everyone. I would no sooner protest their presence on the stage than I'd object to Jay Leno riffing harmlessly on small town newspaper gaffes.

Of course, I didn’t regularly watch Leno. And I’m even less likely to tune in – at least conventionally – for Fallon, seeing as how he has openly embraced the medium of viral video. His show’s most distinguished late-night moments will almost certainly be available in easily digestible bites every morning like McDonald’s hash browns. As was the case with his previous show, the Roots will be representing hip-hop to the fullest through songs and sketches. As a die-hard fan of hip-hop and a sometime fan of the “Tonight Show,” I appreciate that. And as a 40-year-old fan of hip-hop, I reserve the right to skip it all and get some sleep.