Scheming without substance: The petty politics of "House of Cards"

This season, actual issues seem to matter little, and the only true believers are outside the halls of power 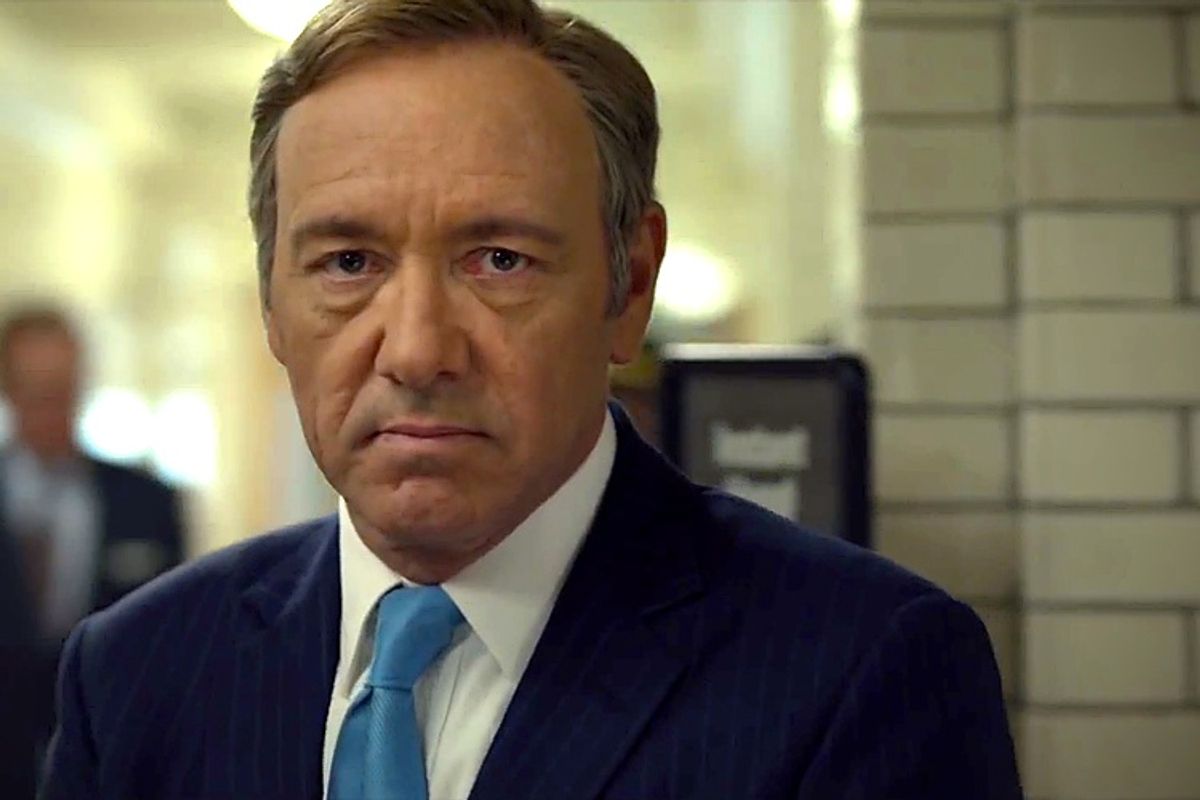 The new season of "House of Cards" falters in many of the very places where the first season excelled.  The story is now chiefly about success, not struggle; politics crowds out what little passion stirs between Beltway professionals; and careful strategy has given way to a stampede that is as blunt as it is bland.  Last year, Frank Underwood, the scheming House whip played by Kevin Spacey, carefully massaged the rules to build his empire. This year, he just breaks them.

None of which is to say the season offers no excitement.  The center of action shifts from Congress to the White House, and the schemes for power, revenge and violence are all bigger this season.  The issues are not, however, and, interestingly, the strongest players are people outside of the political arena.

Policy junkies will find little to feast on.  It's no spoiler to report Underwood's supposedly ingenious proposal for avoiding a government shutdown – he pushes fellow Democrats to raise the retirement age.  What a concept!  Some liberals balk, a Tea Party senator has second thoughts, but in the end, Underwood's parliamentary hardball wins.  What are viewers to make of this portrait, a man with the tactical abilities of LBJ and the policy instincts of the Peter Peterson Foundation?

It doesn't matter. The story careens on, expending no explanatory energy on Underwood's supposed breakthrough. Other issues come in for the same treatment – a sort of narrative objectification.

U.S.-China relations are just a chip in a battle between Underwood and a major donor.  Mrs. Underwood pushes a bill on military sexual assault, a reference to the Military Justice Improvement Act, and there are passing discussions about the policy tradeoffs.  When the bill's backers back down, however, it is simply to show that the posturing mattered, not the issues. Just like the China fight. And the retirement age. And, you know, everything else.

Surely viewers can relate to the critique that Washington has no values. The premise begins to grate, however, in a story where everyone keeps fighting so hard for opposing policies. Are they all faking? Does anyone believe anything in this town?

Yes.  But not the pols.  The most striking argument in the new "House of Cards" is the few true believers it does offer – a reporter, a source, a hacker and a billionaire.

The billionaire is Raymond Tusk, a donor and presidential confidante played with a tony gravitas by Gerald McRaney.  The name Tusk, like Spacey's direct addresses to the camera, is knowingly overwrought. The man locks tusks with Underwood repeatedly, and while it's hard to make a scheming billionaire relatable, Tusk emerges as a straight-shooter who stands for something – his business.  Fiduciary duty may not be the highest of moral obligations, but it proves more grounded than Underwood's endless and often pointless scheming.

There are few themes pressed more relentlessly in the show than "money versus power," a theme Underwood highlighted in the first season. "Choosing money over power is a mistake almost everyone makes," he tells viewers, "Money is the big mansion in Saratoga that starts falling apart after ten years -- power is that old stone building that stands for centuries."

Yet the battle with Tusk demonstrates that money can be swifter than power and, in a world of secret Super PACs, it can also be more discreet.  Michael Dobbs, the author of the original "House of Cards," said last week that Netflix's American take on the show offers a more skeptical view of the "power of big business," while "the British version dwells much more on the power of press barons."

British tabloids were cast as a part of the problem – literally intertwined with the ruling class – while in the American imagination, a reporter can still be democracy's backstop.

This year, that reporter is Ayla Sayyad, a meticulous young journalist at the fictional Washington Telegraph.  Her scoops drive the entire plot arc of this season.  She stands out immediately as the polar opposite of Zoe Barnes, the reporter/blogger who spent the first season trading sexual and media favors with Underwood, and decamped from the establishment Washington Herald for a gig at the upstart website Slugline. Barnes' leads went cold when her transactional sources no longer needed her stenography, and her career went cold when she tried a more adversarial approach with only a blog to stand on.

By contrast, Sayyad puts the M. in M.S.M.  She invokes her paper's institutional authority to make sources respond, from big business to big government.  Her work evinces the Watergate reporting model of a bygone era – disclosures catalyzing the government to investigate itself.  The real Washington may be enthralled with Twitter and BuzzFeed, but "House of Cards" longs for Woodward and Bernstein, if only to save the town from itself, one more time.

Still, there is hope on the Internet.  The most intellectually consistent character in this sad, dark town is Gavin Orsay, a hacker who teams up with Lucas Goodwin, a friend and former colleague of Zoe's, to pursue alleged government corruption.  Orsay takes personal risks for his beliefs – a crisp contrast to the show's depiction of politicians – and champions the real-life case of Barrett Brown, a writer currently facing federal prosecution for linking to stolen materials.

"Most of my friends are locked up and rotting away ’cause they poked the bear one too many times," Orsay tells Goodwin, who is taking his own risks in the hope of exposing Underwood.  There are undertones of Snowden here, as Orsay gains leverage by turning the tools of digital surveillance back against the government – a political practice known as sousveillance.

Any nod to these characters' resolve, however, does not mean they receive karmic protection.  They are brave, but that doesn't make them victorious. Being a true believer is dangerous, and the whistleblowers are soon facing charges of their own, while the lawbreakers in government float away.  That's no surprise to the insiders.  Prosecution is always about evidence – not crime.  And Frank Underwood doesn't leave much evidence behind.