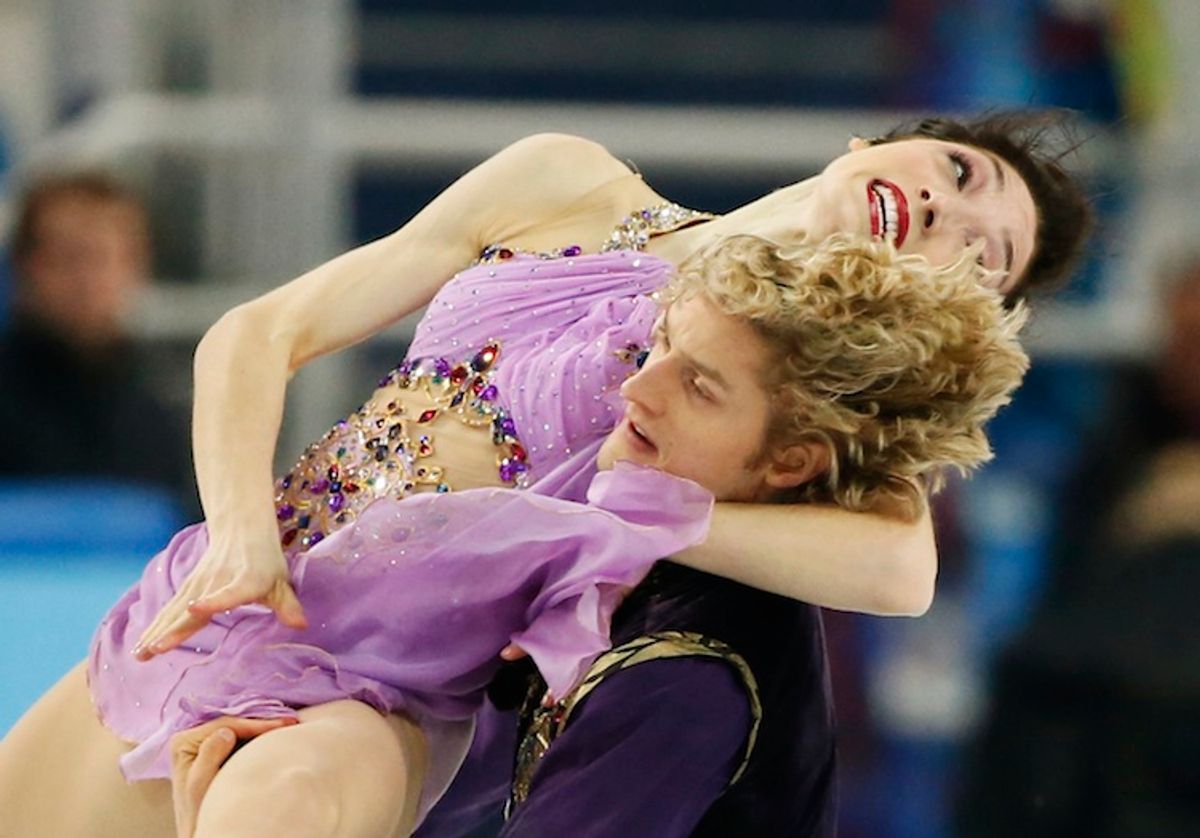 Remember how many male figure skaters stumbled, skidded and thudded to the ice last week during their individual Olympic event? Well, the ice-dancing pairs, who dominated NBC’s prime-time Sochi broadcast on Monday, didn’t do any of that. In fact, none of the duos who glided with balletic grace across the ice made any significant missteps. Which is kind of amazing, right? I mean, there are two skaters in every pair which, theoretically, should double the odds of an error.

But everybody was at the tippy-top of their twizzle game, most notably Americans Meryl Davis and Charlie White, who earned the first ice-dancing gold medal in U.S. history, and Canadians Tessa Virtue and Scott Moir, who followed up on their Vancouver gold with a silver. Was there a massive difference in quality between these two pairs, rivals who train with the same coach? As a figure-skating laywoman, I honestly couldn’t see it. To decide which one got gold and which one got silver, I would have had to resort to a coin toss, or rock-paper-scissors, or a really intense game of beer pong. Virtue and Moir earned the highest ice-dancing score of all time, a record broken mere moments later by Davis and White. Clearly, both pairs were pretty damn good.

And clearly both of them were among the big heroes of Monday night’s Olympics coverage. So let’s bask a bit more in their achievements, as well as the achievements of the other winners of Monday Night Sochi.

Meryl Davis and Charlie White: As noted above, their skate to “Scheherazade” was exquisite and flawless. Watching them skate together was basically like watching Evan Peters from “American Horror Story” embrace the ballerina from my childhood music box, and just spin, spin, spin until everything they had -- their passion, their poise, their purple ensembles -- got left on the ice.

Tessa Virtue and Scott Moir: At times, I wasn’t even sure their skates were touching a frozen surface at all. That’s how light and heavenly they were. Also it was kind of fun watching them hug Davis and White during the flower ceremony. Everything seemed perfectly cordial between the four of them. Yet at the same time, I would not have been surprised if Virtue’s eyes had turned into robot lasers that shot actual holes through Davis’ and White’s sparkly regal outfits. Speaking of Virtue: is it possible to look at her without pondering how much she resembles Amy Adams? Twitter suggests it is not. But then who is Moir’s Hollywood doppelganger? Entertainment Weekly’s Annie Barrett suggested the answer is actor and onetime member of “The State” Ken Marino. I can see that. But I’d also like to humbly offer the guy who played Christian in “Clueless” as another possibility.

The two other American pairs, Maia and Alex Shibutani and Madison Chock and Evan Bates: Neither of them medaled, so their efforts were hugely, understandably overshadowed by the victory of Davis and White. Still, let’s give these two a round of applause for their efforts. Chock and Bates skated beautifully to music from “Les Miserables,” timing their lifts perfectly to the soaring moments of “One Day More.” And the Shibutani siblings gleefully skated to a Michael Jackson medley, one that included a couple of dance moves taken directly from the “Thriller” video. If you bring “Thriller” zombies to the Olympics, oh hell yes, you’re a winner.

Bob Costas: Bob was finally back! And while his eyes weren’t fully clear -- I still detected a hint of crimson -- he was doing much better on the conjunctivitis front than he has been since these games began. At the top of the broadcast, he thanked his fill-ins, Matt Lauer and Meredith Vieira, and also apologized for “the unavoidable and uncomfortable circumstance of a broadcaster’s ill-timed affliction getting in the way of what we all came here for.” Translation: I’m really sorry all my pink-eye memes briefly distracted the Internet from coming up with memes that focus on actual Olympic athletes.

Alexander Zubkov: The Russian bobsledder finally earned his long-coveted gold medal in the two-man event, after winning bronze and silver in previous Olympic competitions. I was especially happy for this guy since he was referred to during the broadcast as “an elder statesman.” Alexander Zubkov is 39 years old. I realize that, when compared to his fellow, younger athletes, that is “old.” But using the word “elder” made it sound like this 30-something is the equivalent of Gandalf.

BMW: OK, technically, the real winners were Americans Steven Holcomb and Steve Langton, who won bronze in the two-man bobsled, giving the U.S. its first medal in that event since 1952. But they won it while zooming down the track in a sled designed by BMW, and the announcer of this event made sure that no one forgot it. “Is this new BMW-designed sled the ultimate sledding machine for Langdon and Holcomb?” Leigh Diffey asked before the pair cruised to victory. I don’t know, but I know that sled is the ultimate Olympic Games product placement.

Jamaican bobsledders, Winston Watts and Marvin Dixon: These guys didn’t medal. They didn’t even come close; they finished in 29th. But they made a delightful appearance during the broadcast because a) this year marked the country’s first appearance in bobsled in 12 years; b) people still love the movie “Cool Runnings” and enjoy being reminded that it exists; and c) it gave NBC an excuse to air part of the 8-bit music video for the Jamaican bobsled team’s reggae-ish theme song, which is obviously the greatest thing that’s ever happened to bobsledding, with the possible exception of “Cool Runnings.” Seriously, despite their dismal performance and various other Olympic snafus, Watts still maintained a positive attitude. “Nothing is easy in life,” he said in an interview, noting that when it comes to any obstacle, they “jump across it like the River Jordan.”

Mac Bohonnon: According to the story told during the NBC broadcast, this 18-year-old kid was basically yanked out of his AP English class, chucked on a plane to Sochi, and thrown onto a mountain just in time to compete for the U.S. in aerial skiing. Clearly there’s some hyperbole in that version of events. But seriously, Bohonnon’s experience was characterized as “a Cinderella story” so many times that I began to wonder if Bill Murray’s character from “Caddyshack” had suddenly been assigned to do freestyle skiing color commentary. Bohonnon just missed the opportunity to compete in the finals, but performed extremely well given the circumstances. Plus, now he’s extra-prepared to compete in the 2018 Games, when we’ll all be singing “Return of the Mac” when he competes. Well, when we’re not singing the Jamaican bobsled theme song. That track is seriously catchy.