Its most deleterious effect: The proliferation of charter schools means underperforming children get left behind 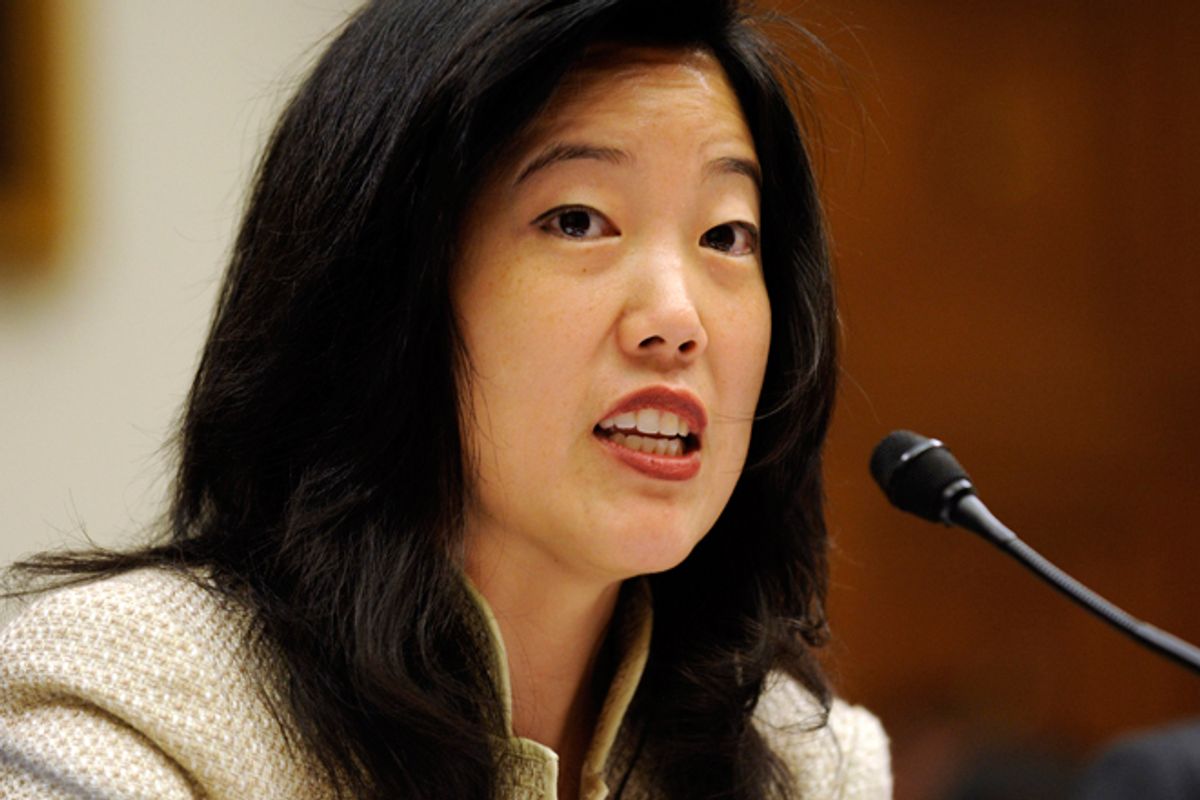 Profit-seeking in the banking and health care industries has victimized Americans. Now it's beginning to happen in education, with our children as the products.

There are good reasons - powerful reasons - to stop the privatization efforts before the winner-take-all free market creates a new vehicle for inequality. At the very least we need the good sense to slow it down while we examine the evidence about charters and vouchers.

1. Charter Schools Have Not Improved Education

The recently updated CREDO study at Stanford revealed that while charters have made progress since 2009, their performance is about the same as that of public schools. The differences are, in the words of the National Education Policy Center, "so small as to be regarded, without hyperbole, as trivial." Furthermore, the four-year improvement demonstrated by charters may have been due to the closing of schools that underperformed in the earlier study, and also by a variety of means to discourage the attendance of lower-performing students.

Ample evidence exists beyond CREDO to question the effectiveness of charter schools (although they continue to have both supporters and detractors). In Ohio, charters were deemed inferior to traditional schools in all grade/subject combinations. Texas charters had a much lower graduation rate in 2012 than traditional schools. In Louisiana, where Governor Bobby Jindal proudly announced that "we're doing something about [failing schools]," about two-thirds of charters received a D or an F from the Louisiana State Department of Education in 2013. Furthermore, charters in New Orleans rely heavily on inexperienced teachers, and even its model charter school Sci Academy has experienced a skyrocketing suspension rate, the second highest in the city. More trouble looms for the over-chartered city in a lawsuitfiled by families of disabled students contending that equal educational access has not been provided for their children.

2. The Profit Motive Perverts the Goals of Education

Forbes notes: "The charter school movement began as a grassroots attempt to improve public education. It’s quickly becoming a backdoor for corporate profit." A McKinsey report estimates that education can be a $1.1 trillion business in the United States. Meanwhile, state educational funding continues to be cut, and budget imbalances are worsened by the transfer of public tax money to charter schools.

So philanthropists like Bill Gates and Eli Broad and Michael Bloomberg and Rupert Murdoch and Jeff Bezos and the Walton family, who have little educational experience among them, and who have little accountability to the public, are riding the free-market wave and promoting "education reform" with lots of standardized testing.

-----Just Like the Fast-Food Industry: Profits for CEOs, Low Wages for the Servers

Our nation's impulsive experiment with privatization is causing our schools to look more like boardrooms than classrooms. Charter administrators make a lot more money than their public school counterparts, and their numbers are rapidly increasing. Teachers, on the other hand, are paid less, and they have fewer years of experience and a higher turnover rate. The patriotic-sounding "Teach for America" charges public school districts $3,000 to $5,000 per instructor per year. Teachers don't get that money, business owners do.

The profit motive also leads to shortcuts in the educational methods practiced on our children. Like "virtual" instruction. The video-game-named Rocketship Schools have $15/hour instructors monitoring up to 130 kids at a timeas they work on computers. In Wisconsin, half the students in virtual settings are attending schools that are not meeting performance expectations. Only one out of twelve "cyber schools" met state standards in Pennsylvania. In Los Angelespublic money goes for computers instead of needed infrastructure repair.

K12 Inc., the largest online, for-profit Educational Management Organization in the U.S., is a good example of what theCenter for Media and Democracy calls "America’s Highest Paid Government Workers" -- that is, the CEOs of corporations that make billions by taking control of public services. While over 86 percent of K12's profits came from taxpayers, and while the salaries of K12's eight executives went from $10 million to over $21 million in one year, only 27.7 percent of K12 Inc. online schools met state standards in 2010-2011, compared to 52 percent of public schools.

It gets worse with the Common Core Standards, an unproven Gates-funded initiative that requires computers many schools don't have. The Silicon Valley Business Journal reports that "Next year, K-12 schools across the United States will begin implementing Common Core State Standards, an education initiative that will drive schools to adopt technology in the classroom as never before...Apple, Google, Cisco and a swarm of startups are elbowing in to secure market share." States are being hit with unexpected new costs, partly for curriculum changes, but also for technology upgrades, testing, and assessment.

-----Banker's Ethics in the Principal's Office

Finally, the profit motive leads to questionable ethics among school operators, if not outright fraud. After a Los Angeles charter school manager misused funds, the California Charter Schools Association insisted that charter schools areexempt from criminal laws because they are private. The same argument was used in a Chicago case. Charters employ the privatization defense to justify their generous salaries while demanding instructional space as public entities. States around the country are being attracted to the money, as, for example, in Texas and Ohio, where charter-affiliated campaign contributions have led to increased funding and licenses for charter schools.

At the college level, for-profit schools eagerly clamor for low-income students and military veterans, who conveniently arrive with public money in the form of federal financial aid. For-profit colleges get up to 90 percent of their revenue from U.S. taxpayers. Less incentive remains for these schools after tuition is received, as evidenced by the fact thatmore than half of the students enrolled in for-profit colleges in 2008-9 left without a degree or diploma.

As with K-12 education, the driving need for profit directs our students to computer screens rather than to skilled human communicators. A Columbia University study found that "failure and withdrawal rates were significantly higher for online courses than for face-to-face courses." The University of Phoenix has a 60 percent dropout rate.

The newest money-maker is the MOOC (Massively Open Online Course). Thanks to such sweeping high-tech strategies, higher ed is increasingly becoming a network of diploma processors, with up to a 90 percent dropout rate, and with the largest business operations losing the most students. For a 2012 bioelectricity class at Duke, for example, 12,725 students enrolled, 3,658 attempted a quiz, and 313 passed. Yet 'schools' like edX are charging universities $250,000 per course, then $50,000 for each re-offering of the course, along with a cut of any revenue generated by the course.

The greatest perversion of educational principles is the threat to equal opportunity, a mandate that was eloquently expressed by Chief Justice Earl Warren in the 1954 Supreme Court decision on Brown vs. the Board of Education: "Education is perhaps the most important function of state and local governments...Such an opportunity...is a right which must be made available to all on equal terms." But we're turning away from that important message. The National Education Policy Center notes that "Charter schools...can shape their student enrollment in surprising ways," through practices that often exclude "students with special needs, those with low test scores, English learners, or students in poverty."

The Knowledge Is Power Program (KIPP), perhaps the most acclaimed charter organization, says it doesn't do that. KIPP has its supporters, and it proudly displays the results of an independent study by Mathematica Policy Research, which concluded that "The average impact of KIPP on student achievement is positive, statistically significant, and educationally substantial."

But funding for the Mathematica study was provided by Atlantic Philanthropies, the same organization that provided$10-25 million in funding to KIPP.

According to a 2011 study by Western Michigan University, KIPP schools enrolled a lower percentage of students with disabilities (5.9%) than their local school districts (12.1%), enrolled a lower percentage of students classified as English Language Learners (11.5%) than their local school districts (19.2%), and experienced substantially higher levels of attrition than their local school districts. For charters in general, the CREDO study found that fewer special education students and fewer English language learners are served than in traditional public schools. And charter schools serve fewer disabled students. According to a Center on Education Policy report, 98 percent of disabled students are educated in public schools, while only 1% are educated in private schools.

In New York City, special-needs students and English-language learners are enrolled at a much lower rate in charter schools than in public schools; and Over the Counter students - those not participating in the choice process - are disproportionately assigned to high schools with higher percentages of low-performing students. Special education students also leave charters at a much higher rate than special education students in traditional New York public schools. In Nashville, low-performing students are leaving KIPP Academy and other charters just in time for their test scoresto be transferred to the public schools. And Milwaukee's voucher program, which has been praised as a model of privatization success, has had up to a 75 percent attrition rate.

Compared to other developed countries, equal education has been a low priority in America, with less spending on poor children than rich ones, and with repeated cutbacks in state funding. But there's no market-based reform where children are involved. Education can't be reduced to a lottery, or a testing app, or a business plan. Equal opportunity in education ensures that every child is encouraged and challenged and nurtured from the earliest age, as we expect for our own children.