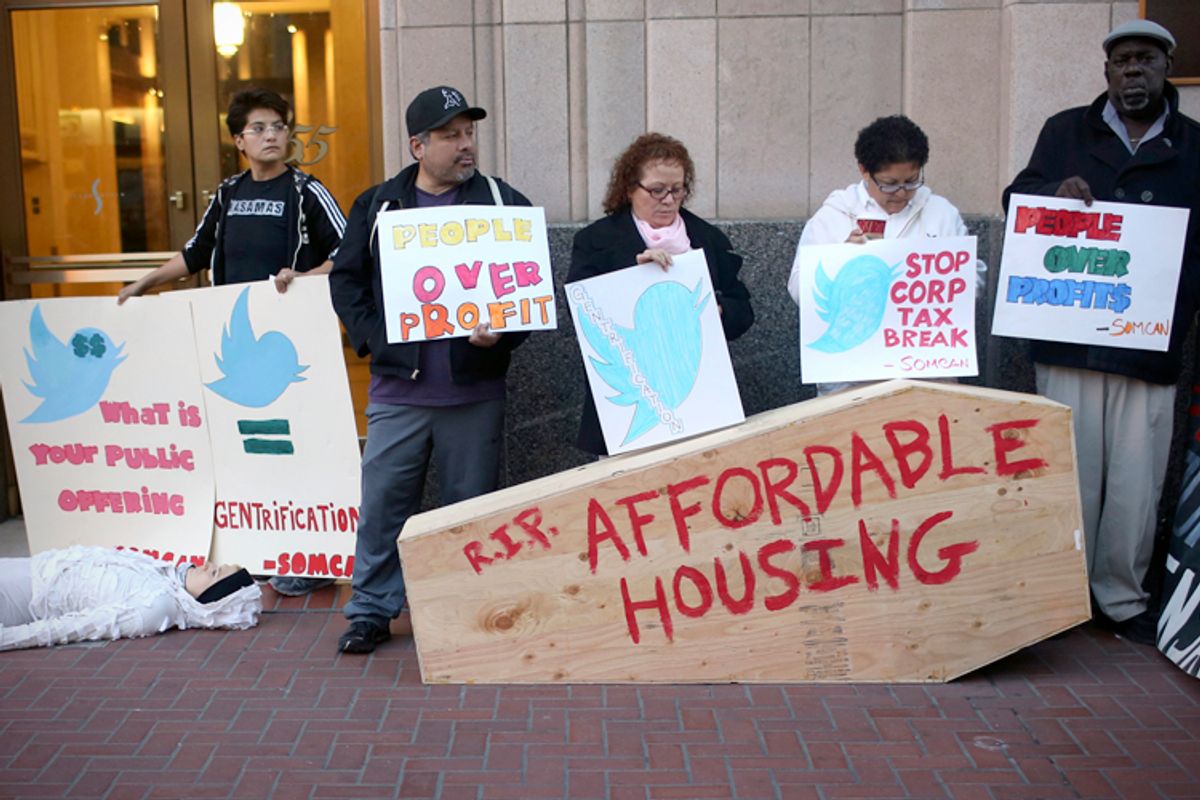 Last week, the two sides of the escalating class war in San Francisco crossed paths at TechCrunch’s seventh Annual Crunchies Awards, the annual celebration of start-ups, CEOs and venture capitalists. While John Oliver both mocked and fêted the tech industry inside Davies Symphony Hall, a coalition of community, labor and housing organizations lambasted the same companies and individuals in an award ceremony of their own, the Crappies.  Twitter CEO Dick Costolo was a double winner, collecting “CEO of the Year” from the insiders and “Tax Evader of the Year” from those standing out in the cold.

None of the recipients of the Crappies’ prizes collected their awards (“Golden Toilet Brushes”) in person, leaving protesters to perform mock acceptance speeches. A fake Tom Perkins (winner of the Peter Shih/Greg Gopman Award for Diarrhea of the Mouth) implored the crowd of about 60 to “Erase the T-word from your vocabulary and call techies ‘Software-Americans.’” (It would be difficult for even the most hyperbolic lampooner to top the venture capitalist’s recent comparison of anti-tech sentiment to Kristallnacht.) Joanna Lopez, a Wal-Mart worker and member of the labor group OURWalmart, accepted the CEO of the Year award on behalf of Yahoo’s Marissa Mayer.  Mayer is a member of Wal-Mart’s board of directors and has been the target of frequent worker protests. “Thank you so much for this award,” Lopez mugged, “and for cutting everyone’s hours.”

But after months of Google Bus blockades, and the resulting media firestorm, activists’ displeasure with the tech boom and its accompanying gentrification and displacement has finally penetrated the insular world of tech.  Legendary angel investor Ron Conway kicked off the formal Crunchies ceremony by calling on tech to get involved: “We may not agree with everything the protesters outside have to say, but they do represent anxiety over a widening income gap. My message tonight is that we — that means all of us — must be leaders in tackling the challenges of housing, transportation and education.”

Of course, not everyone was feeling so civic-minded. Jack Wu, the CEO of a start-up that appears to be a real-life version of Cher's outfit-coordinating computer program from the 1995 move "Clueless," paid two people $25/hour via TaskRabbit to photobomb the Crappies with massive QR codes linking to his company. “We wanted to use the protesters to promote our product,” he said.

It’s a victory of sorts for the protesters that their concerns are being acknowledged by tech. Conway has been joined by Salesforce CEO Marc Benioff in what appears to be a concerted effort to improve the industry’s reputation. Conway is working with Mayor Ed Lee and other tech leaders to, in his words, “leverage the collective power of the tech sector as a force for civic action in San Francisco.” Benioff is pushing other companies to adopt his 1/1/1 plan – a model for corporate philanthropy and volunteerism. According to an article by Maria Poblet, executive director of grass-roots organization Causa Justa: Just Cause, Google, Facebook, Airbnb and other start-ups recently reached out to Supervisor David Campos, “wanting to fix the image problem tech has earned for itself in the Mission District.”

But the solutions tech is likely to propose are not necessarily consistent with the reforms protesters want to see.  Conway was a major funder of pro-real estate industry candidates in the 2012 citywide reelections, and he famously told a roomful of business leaders, “We must take our city back” from “progressives” in 2010. He founded a business league, sf.citi, in 2012 whose main initiative has been to change San Francisco’s payroll tax to a gross receipts tax, a reform that principally benefits tech companies with large staffs and small revenues. A 2012 New York Times article pointed to Conway’s influence on a variety of tech-friendly San Francisco moves, including the institution of the so-called “Twitter tax break,” the decision not to collect hotel tax from Airbnb, and the loosening of regulations on the use of credit-card app Square in taxi cabs.

The Twitter tax break was front and center at last week’s protest. Tony Robles, a housing organizer with Senior and Disability Action, told me, “The bottom line is the tech industry needs to pay their fair share in taxes. We don’t want the feel-good shit. I’m a fifth-generation San Franciscan, and I’ve lived in this city for 50 years. Now my relatives have been displaced by gentrification.” In 2011, Twitter threatened to leave San Francisco unless it was given a break on the city’s payroll tax, and San Francisco’s government complied. Six tech companies, including Twitter, One Kings Lane, and Spotify, now pay significantly reduced taxes in exchange for signing “community benefit agreements” (CBAs). Twitter’s deal alone will cost San Francisco $56 million in revenue.

Twitter’s CBA is meager in comparison to the benefits it will receive. While the company pledged to donate a total of $388,000 to various nonprofits (that’s 0.69 percent of its tax benefit for those of you keeping score), other promises in the agreement are silly (“Twitter will encourage employees to attend local arts and cultural programming by making information on these opportunities available to employees”), self-serving (“Twitter will offer free advertising -- $60,000 worth of credit for ‘Promoted Tweets’ – to nonprofits”), and halfhearted at best.  The company commits to “highlight its ongoing and special community efforts through the ‘Twitter for Good’ blog website to provide transparency and a more regular reporting mechanism for the public.” Since its inception in June 2012, the blog has published only six posts, the most recent in November 2013. The @twitterforgood account “highlighting our social good initiatives in S.F.” has sent out just 11 tweets.

The other companies have signed similarly stingy agreements. Spotify has promised to “pay for employees to attend local performances including concerts, theater, dance or performance art shows” (an admirable employee benefit of questionable value to the community) and “distribute local event listings” to its employees via email (not much of a sacrifice).  The company pledged no actual money to any organizations. In lieu of cash, One Kings Lane is offering $25,000 worth of donated home goods to neighborhood nonprofits. Not included is any suggestion of what the nonprofits should do with 500 colorful pillows.

It’s details like these that led Tommi Avicolli Mecca, an organizer with the Housing Rights Committee who emceed the Crappies, to shout, “These community benefit agreements are zilch. They mean nothing! We want an end to stupid community benefit agreements that don’t benefit the community.” The citizens advisory committee tasked with reviewing the CBAs recommended rejecting five out of the six proposals last month – a recommendation ignored by the city government.

When I spoke to Jim Prosser, a representative of Twitter, about the controversy around the agreements, he rejected the notion that the community is unhappy with Twitter, saying of the citizens advisory committee, “That’s just like a dozen people.” Prosser also challenged the ideas that Twitter is causing displacement, citing the relatively small number of people Twitter employs, and should be involved in addressing the problem: “Twitter doesn’t build housing.” He did say that Twitter will be involved in conversations with the city around civic policy and defended Twitter’s CBA, saying, “I understand the criticism, but when you talk to the nonprofits [receiving promoted tweets], they’re grateful.”

Neither Spotify nor One Kings Lane responded to requests for comment.

Karl Robillard, a representative of St. Anthony’s, a neighborhood nonprofit that provides meals, job training and other services to San Francisco’s poor, had a measured reaction to the tax breaks and CBAs. He was appreciative of the volunteers from Twitter who spent a day helping women in their technology lab, but reserved his highest praise for ZenDesk – the one company whose CBA was approved by the citizens advisory committee. ZenDesk donated $142,000 to St. Anthony’s free medical clinic, and its engineers built a Yelp-like app for people seeking services like those St. Anthony’s provides.

“The economic boom has many positive implications, but a number of people will be hurt more by the boom,” he said. He described an increase in fear and anxiety from residents who know they are an eviction notice away from homelessness. St. Anthony’s dining room is serving more meals per month, and the number of families requesting free clothes went up 60 percent from 2012 to 2013. Still, he urged patience with the tech companies: “I would encourage people to use caution. There is a short term where companies won’t be paying taxes that they probably should be paying, but in the long-term, if they stay in the neighborhood, it could be really good.”

But with rents up 72 percent since 2011, no-fault evictions doubling over the past year, and thousands of working- and middle-class residents leaving the city, activists like Mecca don’t have time to wait.  “I want to see the tech industry pay,” he said. “Pay lots of money that can be used for affordable housing, free public transportation, and a community land trust. If the tech industry really cared about the community, they would tell the city they don’t want the tax breaks.”

Mecca believes that the tech industry shares responsibility for the displacement of working-class families with the real estate industry. Highly paid tech workers increase demand for housing, creating an environment where real estate speculators "swoop in like vultures." He would like to see tech companies work with housing groups to limit predatory speculating by lobbying for the repeal of the statewide law that enables most evictions -- the Ellis Act.

Jane Martin, the political director of People Organized to Win Employment Rights, a grass-roots organization of working-class African-Americans and Latinos, expanded on the list of demands for the tech industry: “We need real solutions on housing and displacement. We want to see tech companies support our legislative agenda on housing, tenants’ rights and transit. Tech companies should be working with us to create real job pathways for low-income residents and investing in public infrastructure."

It’s hard to imagine tech acceding to any of these demands. The industry is composed of people who consider themselves “innovators” and “makers,” and all of tech’s gestures toward community engagement have started from the premise that people in tech know what’s best for San Francisco. Will the smartest guys in the room follow the lead of activists in the street? Will they throw their considerable money and resources behind the policy proposals coming out of grass-roots efforts like the citywide tenant convention held last weekend? Or will they continue to push for a combination of business-friendly reforms, charity and volunteering?

“Charity is not the solution,” Feng Kung, another organizer of the protest, told me. “Unless tech gets on board with systemic solutions for displacement of working-class and poor communities, there won't be anyone left to be charitable to."