GOP's chilling new assault on voting: Why this man wants to scale back early voting in Georgia

Georgia's Barry Fleming says he's worried about having to pay for 3 poll workers in small towns. So here's his plan 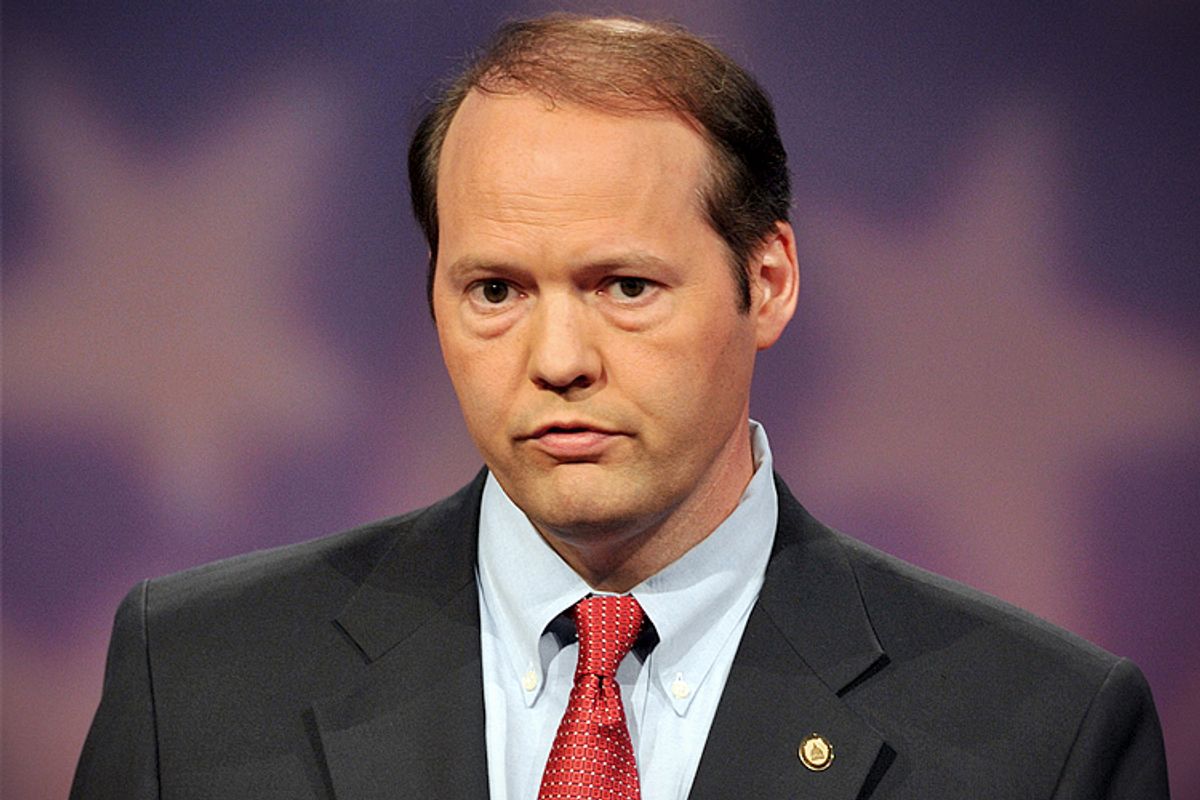 Republicans in Georgia's General Assembly are advancing a bill to dramatically scale back early voting for elections in hundreds of cities across the state. The bill's sponsors argue that cash-strapped municipalities cannot afford to staff polling places for up to three weeks before Election Day. Crying foul, civil rights activists call the bill a thinly veiled assault on voting access for the state's minorities in the wake of the Supreme Court's recent weakening of the Voting Rights Act.

One thing beyond dispute is that Georgia’s robust three-week length of early voting has been used time and again to justify controversial and oft-successful proposals to eliminate polling places in localities across the state. Now, town officials fear that state lawmakers will pull away the very rationale that closed their cities’ voting sites.

Shuttering election precincts to cut costs is a measure that, despite concerns from civil rights activists, has seduced officials across Georgia. In visits to local elections offices around the state, Brian P. Kemp, Georgia's Republican secretary of state, has pushed the idea that, because Georgia's long days of early voting increases voter access, localities can go ahead and eliminate Election Day polling sites. If the new bill passes, residents in cities that have pursued this logic could see their already truncated election infrastructure matched by a slash in voting days.

Surging minority participation in Georgia elections has been attributed to increased poll access brought by early voting. In September, the Justice Department sued North Carolina over its own attempt to scale back early voting, asserting the move would disenfranchise minority voters. Similarly, civil rights activists argue that eliminating polling precincts can have a disproportionate effect on poorer communities (which are disproportionately black and Hispanic in Georgia) with limited access to transportation.

"They keep finding new ways to make saving money an excuse to limit voting here," says the Rev. Floyd Rose, the president of the Valdosta-Lowndes County chapter of the Southern Christian Leadership Conference, a national civil rights group. “The real reason seems clear to me: They want fewer people out voting.”

On the far southern edge of Georgia, Lowndes County has seen its number of voting precincts plummet to nine from 37 over the past eight years. Citing that early voting has increased access to polls, county officials pushed successive waves of voting site reductions, many of which affected the majority-black city of Valdosta. Last year, after another round of consolidations, Lowndes County was ranked Georgia's second worst for voter access out of the state's 159 counties in a report issued by the Center for American Progress Action Fund.

The new bill, HB 891, would not affect the six towns in the state that have combined their municipal governments with county governments, and it applies only to elections where only municipal offices are being voted upon. It will not affect federal, state or county races.

Although the bill applies to larger municipalities like Atlanta and Savannah, its proponents say that the long period of early voting makes little sense in smaller towns.

"In Georgia, we have 5- or 600 cities and almost half of those cities have less than 500 people," says Republican state Rep. Barry Fleming, who introduced the legislation. "In these towns, you can have only a hundred or so people voting and you've got to pay three poll workers for three weeks — it adds up to be a lot of money. Really, they'd probably like to have no early voting in some of these tiny towns." Fleming added that Georgia residents seeking to vote in advance of Election Day can cast absentee ballots.

Rev. Rose of Lowndes County hopes the Justice Department will use its remaining powers to scrutinize the effect that any reduction in early voting will have on the state's minority populations.

Last June, the Supreme Court disabled key provisions of the Voting Rights Act of 1965, which mandated that nine states, mostly in the South, must attain approval from the federal government for voting changes. Now, rather than blocking discriminatory voting laws before they go into effect, the Department of Justice must pursue the more burdensome course of suing states to invalidate existing laws.

"Since the ruling in June, we've seen much more action with voting," says Deane Bonner, president of the local branch of the NAACP in Cobb County near Atlanta. In recent years, Cobb County's largest city, Marietta, cut a third of its polling places on the promise of Georgia's strong early voting program, and, just weeks after the Shelby ruling, the adjoining city of Kennesaw quietly eliminated two of its seven voting precincts despite concerns from the NAACP.

Adjacent to Cobb County is more rural Cherokee County, which recently cited Georgia’s strong early voting system as a primary reason to slash its overall number of voting precincts to 28 from 42.

"These things pass through without a lot of people seeing or hearing," says Bonner of the NAACP. “But we see it because it's happening to us."