Sochi Olympics: The 9 figure skaters you need to watch today

These women dominated last night's short program; watch them tonight as they head into the free skate 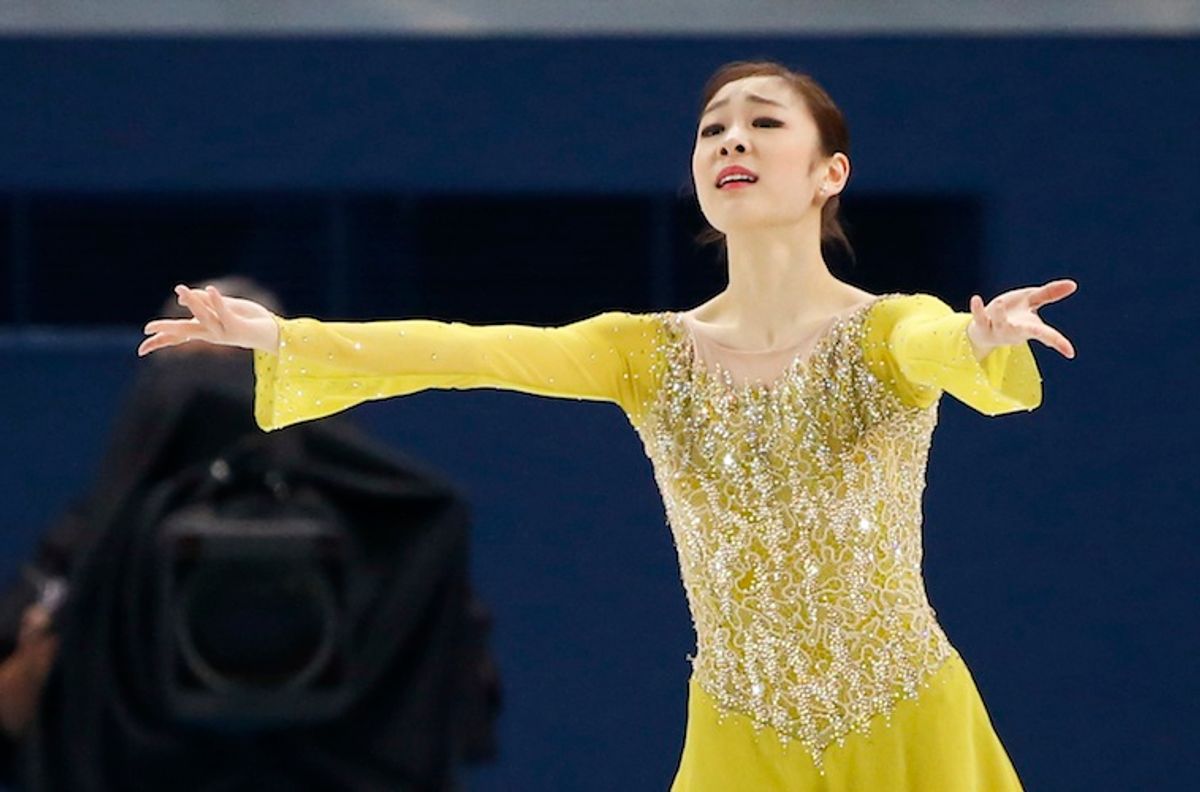 It’s wonderful that two U.S. duos -- Elana Meyers and Lauryn Williams, and Jamie Greubel and Aja Evans -- won silver and bronze, respectively, in women’s bobsledding, even if Meyers and Williams did miss gold by the smallest fractions of a second. It also was thrilling to watch ultra-zippy skier Ted Ligety speed his way to gold in the men’s giant slalom, especially since every time I say his name, I sing it to the tune of Blackstreet’s “No Diggity.” (Try it -- it’s fun!)

But let’s be honest: Wednesday night’s coverage of the Olympics was all about the women’s -- oh, pardon me, ladies -- individual figure-skating competition. One of the most popular Olympic events, if not the most popular, it took center stage during NBC’s broadcast. Before many of the major competitors in the short program performed, NBC even aired a video segment about the media pressure on these young Olympians, one that played like the opening titles of a major motion picture. This wasn’t mere coverage of another Sochi event. This was “Ladies Short Program: The Movie.”

And like any movie, it had a cast of characters, some of whom, based on their scores, appeared to be supporting players in this drama while others clearly emerged as leads. Here’s a look at that cast as we prepare for Thursday’s medal-determining free skate.

Polina Edmunds: The 15-year-old American skater with the Russian mother made her Olympic debut with a clean, error-free skate, one good enough to put her in seventh place at night’s end. Still, it was tough to imagine her landing on the podium; as a young teenager, she still seems a little more gangly than effortlessly graceful. “One minute she looks like a 15-year-old, overwhelmed by the pressure, and then the next, she’s in full control,” said commentator Sandra Bezic. “Don’t you think she’s saying to herself, wow, that was fun?” asked announcer Tom Hammond rhetorically, after Edmunds finished her program. By the way, that was one of the less inane statements made during the play-by-play of the short program competition.

Mae Berenice Meite: This French Olympian also delivered a nice, solid performance without any big mistakes. But the most notable thing about her performance was her choice of music: Prince! Which, as you may recall from the recap of the men’s event, should auto-qualify a skater for gold as far as I’m concerned. Here’s what’s weird, though: She skated to the exact same Prince song as the U.S.’s Jason Brown: “The Power of U,” from the “Graffiti Bridge” soundtrack. Obviously the skaters probably don’t survey the field to make sure they’re not using the same song; more than one competitor in this Olympics has chosen music from “Les Miserables” as their soundtrack, for example. Still, “The Power of U,” as Prince songs go, is a more obscure one, which makes it odd that two different skaters chose it.  Is there a compilation CD called “Ice-Skating With Prince” that both Meite and Brown used as primary source material for their programs? Is “The Power of U” track one on that CD?

Mao Asada: Poor Mao Asada. Practically right out of the gate, this Vancouver silver medalist fell to the ice on a triple axel. Then, later in her program, she executed a double loop instead of the triple that was required. “This is disastrous,” said non-word-mincer Scott Hamilton. “For her to have this performance is devastating.” “But she’s also been skating so beautifully,” added Bezic, playing figure-skating good cop to Hamilton’s bad. She’s currently in 16th place in the ranking, too far for her to reasonably hope to stand on a medal podium again.

Yuna Kim: In the prime-time broadcast, there were more leading ladies than supporting players, because NBC has to eliminate the less compelling performances for time purposes. And of those leads, Yuna Kim was the strongest. The defending gold medalist didn’t place even a fraction of her blade in the wrong place; her skate to “Send in the Clowns” was a thing of wispy, graceful beauty that could make a grown adult-person a little verklempt. And by grown adult-person, I mean me. “She is one of the greatest competitors I’ve ever witnessed,” said Bezic, in her pretentious-whisper-serious voice. And that is why Kim is in first place right now.

Gracie Gold: Hey, this probably never occurred to anyone before but … isn’t it funny that American Gracie Gold is aiming for a gold medal at the Olympics and her last name is Gold? To their credit, the announcers only went to that well one time, which allowed them to meet their Gold-joke-related quota. “What a name for a figure skater,” Hammond said. Great. Quota met. Let’s move on.

Gold looked a little nervous on the ice despite the fact that her coach, Frank Carroll, instructed her beforehand to “have fun out there.” She went through the motions of her program efficiently and effectively, but lacked the comfortable poise of Kim. “That was work. That was hard work,” Hamilton said of her routine. “She looks like the figure skater figurine in a jewel box,” Bezic said at one point. Um … OK. That figurine currently sits in fourth.

Yulia Lipnitskaya: The 15-year-old Russian dynamo, so impressive during the team competition, had some trouble in the short program. After getting prepared to skate by having her ear lobes massaged, Lipnitskaya started out strong, but fell uncharacteristically on a triple jump. Still, the closing spins in her program, during which she stretches one of her legs from here to roughly the planet Venus, remained otherworldly. “This music and concept, ‘Don’t Give Up on Love,’ is a beautiful choice for her, because it celebrates her youth but at the same time, reveals her old soul,” Bezic noted during Lipnitskaya’s skate. Because apparently the skating commentary hadn’t gotten pretentious enough and Bezic wanted to kick it up a notch. The young skater looked frustrated with herself because of that spill. But she’s still in fifth place, which isn’t bad at all.

Carolina Kostner: The Italian was skating with the hope of winning the first singles figure skating medal in her country’s history. She skated to “Ave Maria,” and she landed every flip and toe-loop effortlessly. At the end of the program, she put her hands together and looked skyward, as if prayers had been answered. If the current rankings stay as they are, she’ll have a bronze medal.

Ashley Wagner: The American skater/Regina George doppelganger has provided us with one of the few quality memes of these Olympic games. On Wednesday, she whipped her ponytail back and forth and, as Hamilton said, worked every note of Pink Floyd’s “Shine On You Crazy Diamond.” And when she saw her score, which ultimately put her in sixth, behind Lipnitskaya, she once again seemed perplexed. “How is that higher than my score?” she asked her coach, presumably referring to Lipnitskaya’s point total, one that exceeded hers even though Lipnitskaya fell. Perhaps realizing that her facial expression could again go viral, she immediately shrugged it off and smiled. Good call, Wagner.

Adelina Sotnikova: This is the other individual Russian skater, the one who hasn’t attracted as much buzz as Lipnitskaya. But when it mattered she skated aggressively and exuberantly. “She attacked that skate from top to bottom,” Bezic noted. Yes. Attack was the right word. Her score put her within a skate blade’s distance of Yuna Kim. According to the Bleacher Report, Johnny Weir characterized that score as “very, very, very generous by the judges” during his NBCSN commentary of this event. Apparently, that’s what happens when you skate on home ice. Can Sotnikova hang on to second place on that same ice come tomorrow? We’ll find out during the sequel to tonight’s event, “Ladies’ Free Skate: The Motion Picture.”