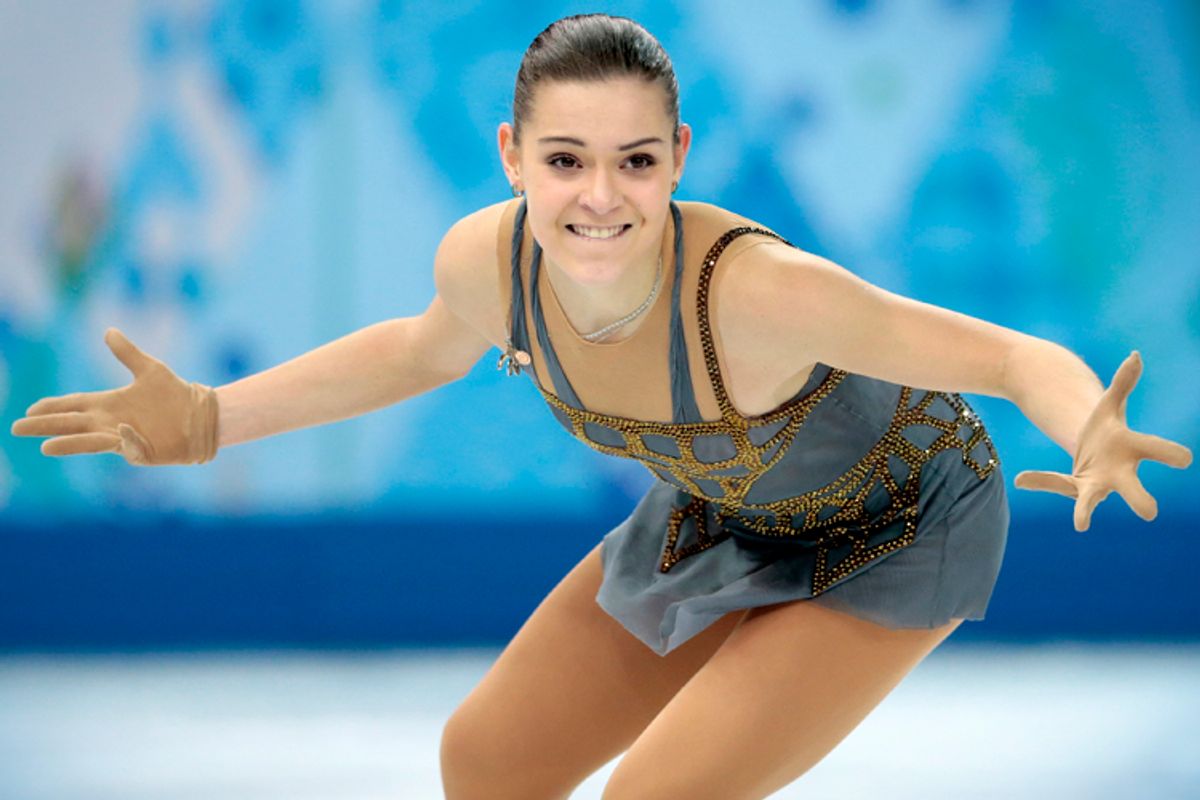 Adelina Sotnikova of Russia competes in the free skate finals at the 2014 Winter Olympics, Feb. 20, 2014, in Sochi, Russia. (AP/Ivan Sekretarev)
--

After an Olympic games beset by low ratings and increasing public apathy, last night’s figure skating finals reminded us why we watch the Olympics: to see something extraordinary. Of course, the presence of a miracle in Thursday’s free skating competition is a matter of perspective. The story stateside will be one of failure, as the U.S. was shut out of medal placement -- with top skater Gracie Gold only placing fourth. This marks the first time in over 4o years that the women’s skating team failed to earn a spot on that tiered podium. And the men fared no better. You would have to reach back all the way to 1936 for a year when the United States didn’t bring home even a single figure skating medal. For America, last night marked a historical futility.

But in Russia, Thursday night was another story, a thrilling tale of redemption for a country hoping for a comeback in the Winter Games’ marquee sport. Russian figure skater Adelina Sotnikova earned gold for her flawless performance in the free skating competition, edging out two-time gold medal hopeful Yuna Kim, her seemingly unbeatable South Korean rival.

In doing so, the country earned its first gold in women’s figure skating -- but not for the woman many expected. Going into last night’s finals, fans were pulling for 15-year-old skating prodigy Yulia Lipnitskaya, whose effortless flexibility and ability to contort herself into a human spinning top stunned audiences. After a much lauded performance in the team competition, Lipnitskaya placed fifth -- which is exactly where she stayed. Kim placed in second, ahead of Italy’s Carolina Kostner.

Although Lipnitskaya proved a fan favorite at the beginning of this year’s figure skating competition, it was Sotnikova who was the star of the Russia’s recent skating renaissance. According to a New York Times profile of the two women, Lipnitskaya came out of nowhere to qualify for Sochi, and few expected she had the skill to compete, let alone vie for a medal, until recently. Lipnitskaya snagged gold at the European championships in Budapest, but Sotnikova, who won the Russian national title when she was just 12, has been in the spotlight for the past five years, the veteran to Lipnitskaya’s ingenue.

The fierce competition between the two symbolized the incredible boom in young figure skaters in Russia, a country determined to make its mark in a sport where success had long eluded them. But after Lipnitskaya fell during the short program this week, all eyes were on Adelina Sotnikova, Russia’s last best hope for glory.

In terms of individual achievement, Adelina Sotnikova’s win is truly remarkable, the kind of impossible comeback win that underdog sports stories are made out of. But for analysts, the shocking upset was a reminder of just how confusing and perplexing the sport can be, as commentators like Kurt Browning argued that victory belonged to Kim. Although Sotnikova showed she was worth her salt, Kim was simply untouchable. “I was shocked,” Browning told the New York Times. “What, suddenly, she just became a better skater overnight? I don’t know what happened. I’m still trying to figure it out.”

Of course, the conspiracy theories came fast and furious, echoing the Russian figure skating scandals of 2002, where the competition had been fixed. Others, like USA hopeful Ashley Wagner, have been arguing that it’s the fault of the Olympic judging system, which she believes had led to baffling decisions throughout the season. Her own reaction to her team competition score is incontrovertible proof of the disconnect between the judges and the public, the way the games move in mysterious and frustrating ways. “I’m speechless,” Wagner said. “This sport needs to be held accountable if it wants more people to believe in it.” Browning argued that the opaque nature of judging is why figure skating participation has plummeted in recent years.

Although those explanations are compelling, there could be a simpler reason for Sotnikova’s success: she got to be the ingenue again. Whereas Wagner and Kim were the stars, Adelina Sotnikova had something to prove. Throughout last night’s competition, she worked the crowd, using hand gestures to get the audience pumped up. Sotnitkova learned from her teammate that it’s not enough to be great. You have to make the people love you -- to be the darling everyone wants to see win. As the crowd roared for Sotnikova, her strategy clearly worked.

Not everyone will be as enthusiastic about her victory, and other stories may emerge in the coming days, as rumors about her upset surge. Such is the case with the Winter Olympics figure skating competition, where one country’s miracle is another’s outrage. If it were any less unpredictable, it simply wouldn’t be the sport we love.