If life-altering mistakes don’t warrant accountability, maybe that’s because nothing can 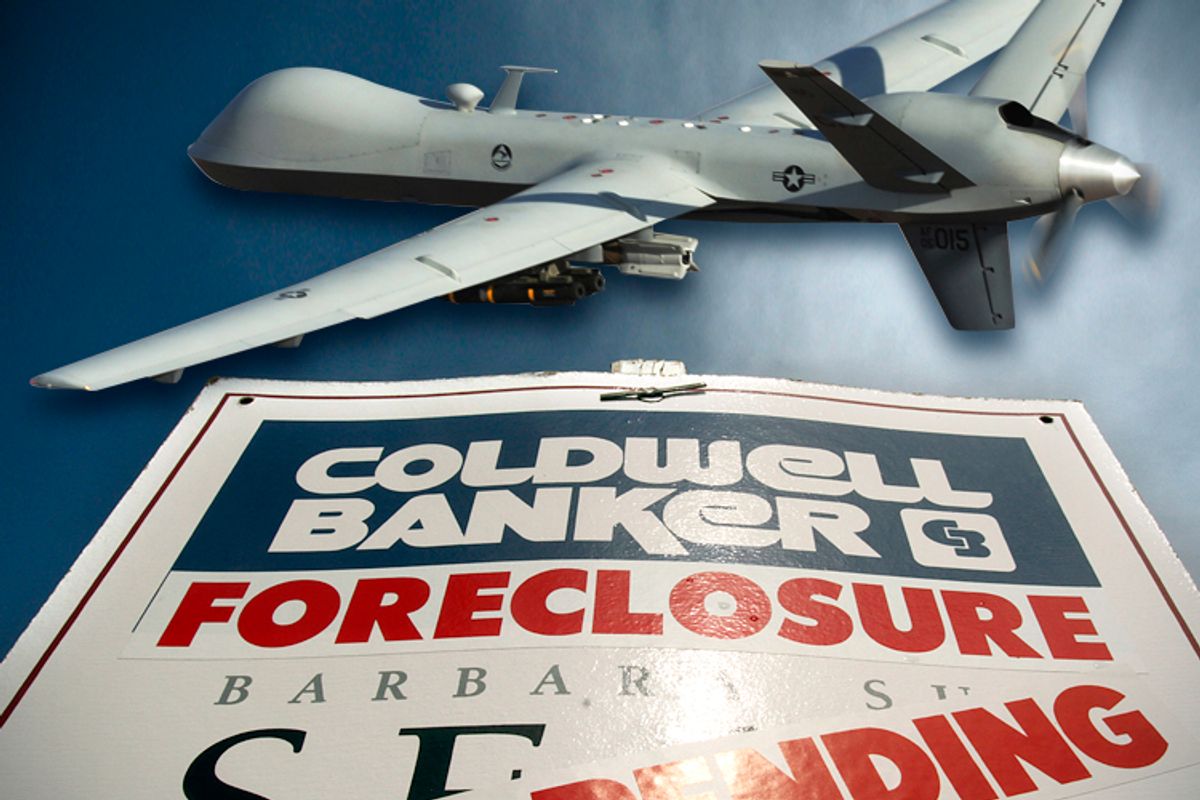 Yet when considering U.S. national security policies, raising the question of mistakes that cost lives is chalked up as a minor issue: “We have to expect collateral damage in wars/drones/bombs/armed conflict.”

Not rectifying mistakes, not allowing oversight, refusing to be accountable to an external judicial body is considered by many an abuse of power. But abuse can only be claimed when a state promises to be accountable. If the state claims that it can’t be accountable, can’t be reviewed for mistakes, can’t rectify mistakes because such practices would be dangerous (the reason isn’t really important here), then at most levels, it’s hard to name the state’s attitude as abuse.

Moreover, as journalist Margaret Kimberley points out, the Obama administration has claimed the right to kill American citizens without charge or trial. That’s not an abuse of power. It’s a complete usurpation of power. There is no space by which to claim the administration should have acted differently by its own lights.

Wouldn’t it be more accurate to call this, not the abuse of, but the monopoly of power?

In 2005, Rahina Ibrahim was “cuffed, detained, and denied a flight” to Hawaii to deliver a conference paper about sustainable housing. She was allowed to return home to Malaysia, but because her name was on a U.S. government no-fly list, Ibrahim’s visa was subsequently revoked; she was prevented from returning to the U.S., thus effectively ending her doctoral studies at Stanford.  She eventually finished her dissertation in Malaysia, and sued the U.S. government to have her name removed from the no-fly list. But the courts initially ruled that she had no legal standing to sue the U.S. to change its policies because she is a non-citizen, and the U.S.’s efforts to fight terrorism could not be challenged by a foreign national.

Ibrahim persisted, and at least in the most recent round, won. Despite the U.S.’s best efforts to the contrary, Ibrahim is the first to successfully force the U.S. government to remove her name from the list. U.S. District Court Judge William Alsup’s ruling points out that the U.S. government had erred: An FBI agent confessed to having filled out the no-fly list form for Rahina Ibrahim in exactly the opposite way as he should have. Alsup had suspected as early as December 2009 that Ibrahim had been the victim of a “monumental” government error.

Murtaza Hussain, in an excellent assessment, points out that Attorney General Eric Holder abused the state-secrets privilege in the Ibrahim case. In an affidavit from April 2013, Holder invoked the state secrets privilege as the reason that the Department of Justice could not turn over the records regarding why her name was put on the no-fly list. Referring to the 2009 State Secrets Policy established under a young Obama administration, Holder promised that he would not claim the state-secrets privilege to hide wrongdoing, incompetence, inefficiency or embarrassment. Nor would he invoke it to “prevent or delay the release of information the release of which would not reasonably be expected to cause significant harm to national security."

Clearly, Holder lied. The reason we know that Holder lied is because of what was revealed in Judge Alsup’s decision. In this specific instance, we have clear evidence that the Obama administration abused its power — on the view that the abuse of power is constituted when a government has promised to behave within certain procedural bounds and legal limits, but has stepped beyond them.

As journalists Kevin Gosztola and Marcy Wheeler demonstrate, the Obama administration is completely indifferent to its own state-secrets policy, except as a subterfuge. They have invoked it time and time again, for horrendous ends. As Shahid Buttar, head of the Bill of Rights Defense Committee, communicated to Gosztola back in 2012 about the invocation of state secrets privilege:

“the ability of the FBI to 'stand above the law' and not answer to any authority when they outright lie or make deliberate misrepresentations about what kind of operations they are or are not conducting. Also, it makes it possible for the Executive Branch to enjoy extraordinary immunity from punishment when incredible abuses of power are committed and cases on torture, warrantless wiretapping or spying are brought forward in court.”

State-secrets privilege is but one of multiple excuses that the Obama administration, like the Bush administration before it, has used to expand its own power without any accompanying review or oversight of it. Whether the continued renewal of FISA (which candidate Obama voted in favor of in 2008), the NDAA 2012, NDAA 2013 or a myriad of other laws the Obama administration has endorsed under the unchecked expansions of power claimed by the FBI, CIA (often in collusion with NYPD) and DOJ. Countless foreigners have been rendered from Somalia, Sweden and elsewhere, and interrogated without defense lawyers; numerous men have been placed in solitary confinement in prisons around the country, still unaware of the charges against them, with sketchy trials at best. Some of these men have been rendered stateless with the help of the British Home Office, such that their kidnappings could not be contested. Muslim communities all over the United States -- in Southern California, Oregon, Minnesota, New York, Pennsylvania and New Jersey — have been subject to spying and entrapment.

Let’s not forget Terror Tuesdays and the Disposition Matrix, where Obama administration officials gather to determine which alleged terrorist to execute next — without evidence, without oversight, with impunity.

It has also been recently discovered that the FBI — the very agency whose employee made a mistake in placing Rahina Ibrahim on the no-fly list -- holds the power to delay the citizenship applications of Muslims, a policy enacted under the Bush administration but still in effect today.

The targeting of Abdulrahman Al-Awlaki, the 16-year-old U.S.-born son of Anwar Al-Awlaki was a mistake.

Hundreds of thousands of people were subject to housing foreclosures due to mistakes.

The Obama mortgage settlement allows for a threshold error rate for mistaken foreclosures.

Killing scores of civilians by drones is a mistake.

Incarcerating innocent (but not guilty) men without charges or trials is a mistake.

Holder’s behavior and that of many of his colleagues in the Obama administration, such as Director of National Intelligence James Clapper, indicates that they have no problems with mistakes, or with lying about government practices, evading demands for evidence, or concealing violations with law. This may make them corrupt — on the view that there should be a higher standard of behavior from government officials, one that conforms to consistency and accountability.

To the extent that the Obama administration has conceded to calls for oversight, it has facilitated pseudo-review boards, as when Obama appointed DNI Clapper to review the National Security Agency’s protocols. Even the name of the group, Director of National Intelligence Review Group on Intelligence and Communications Technologies, indicated no interest in external oversight.

On the view that lying, evading and concealing are the (counter)part and parcel of the Obama administration’s approach to national security — the other part being that any and all strategies will be utilized without regard to accountability or oversight, because these are necessary actions to protect the public at all costs -- then Holder’s and Clapper’s actions don’t reveal an abuse of power, but rather the precise and intended application of power.

In fact, as many have pointed out, the Obama presidency is following in the footsteps of the Bush administration. It might be more accurate to say that the current administration is carving out even bigger footsteps for itself, with its record number of drone murders, solitary-confinement-based incarcerations, domestic and global surveillance, deportations of migrants, and its pointed indifference to looting bankers. By claiming the right to wield power without apology in all areas of national security domestic and foreign, and on behalf of Wall Street, the Obama administration is claiming the status of the Leviathan, as the sovereign authority in Thomas Hobbes’ 16th century treatise on politics is named.

The Leviathan claims both to be the actor and author of the collective will: Once people have handed over their consent to the sovereign (demonstrated by abrogating each individual’s rights to kill), then the Leviathan claims that power in the name of the people completely. The Leviathan can do no wrong and admits to no wrong. What’s more, unless a person can find a stronger protector, they have no choice but to submit to the Leviathan’s authority.

The Obama administration refuses to admit that its policies are fraught with mistakes, concede that its mistakes have hurt innocents needlessly, or correct those mistakes in the name of state security. It resists attempts to make it accountable by resorting to incarceration (John Kiriakou), mock trials (Chelsea Manning) or no trials (Barrett Brown), rescinding passports (Edward Snowden), coercing other sovereign states to incarcerate challengers to its power (Yemen/Abdulelah Haider Shaye), and killing citizens and foreigners alike without review or impunity (whether by drones, financial starvation). It claims to be the ultimate sovereign authority — without challenge, dissent or resistance. It makes the same claim as the Leviathan.

At some level, the question that needs to be addressed is not whether the Obama administration is interested in holding itself accountable — but whether we are interested.

If U.S. citizens are interested in the accountability from an administration that considers itself to be not only above the law, but is unilaterally creating law and (by extension) determining others’ criminality through its own (often secret) standards, then we have to decide how to wrest back power from an absolutist state. By an absolutist state, I mean an administration that considers dissent, scrutiny and criticism from any lowly individual unforgivable, while insisting that its own mistakes (real and contrived) are necessary to its self-awarded status as the ruler of the world.