Generational warfare on the big screen: Raising millennials and fighting with Mom in "Osage County"

"August: Osage County" is one of the best depictions yet of the broken relationship between old and young in the US 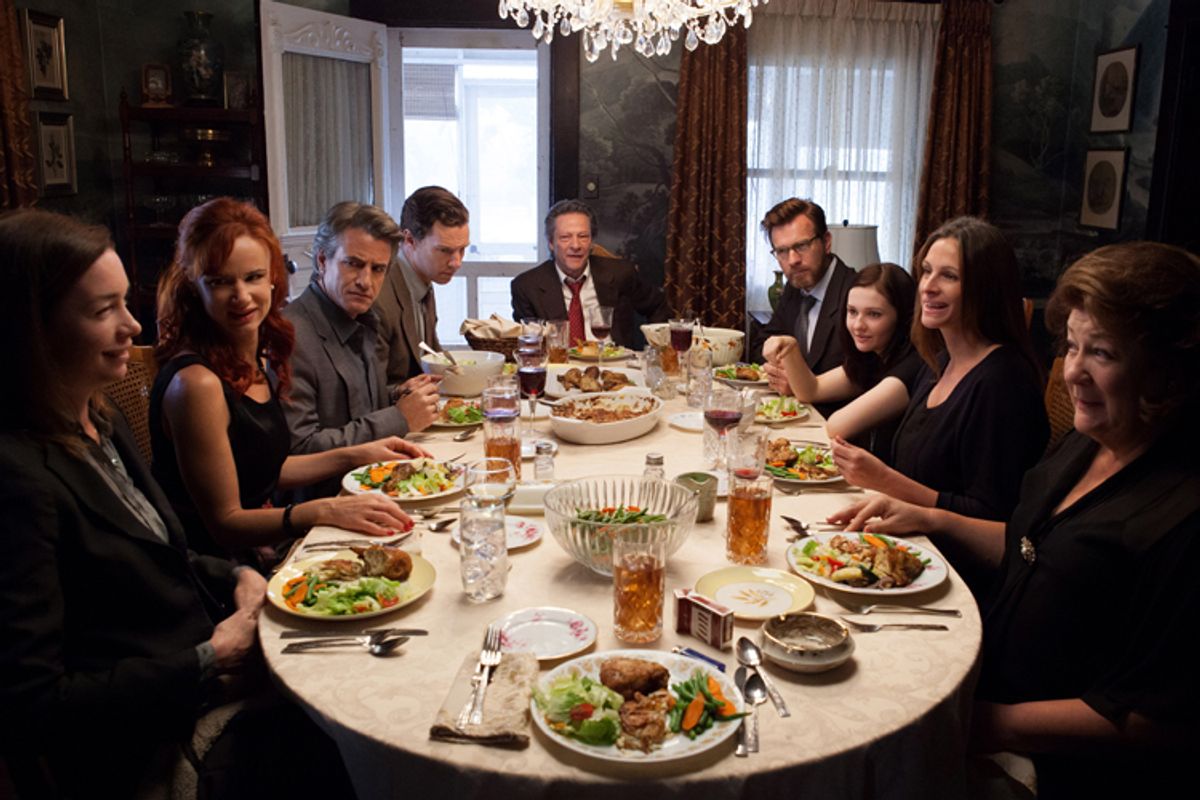 A still from "August: Osage County" (The Weinstein Company/Claire Folger)
--

The action of "August: Osage County" occurs on the Oklahoma plains, described in the screenplay as “miles of unforgiving, summer-scorched prairie,” a “flat hot nothing” that produces “spiritual affliction,” a place where you can run and run but where, as one Oklahoma woman says to another, “there’s nowhere to go.” This arid space has exerted a persistent and quite specifically idealized hold over Americans’ cultural imagination. When we see the plains we think of Depression-era photos by Walker Evans or Dorothea Lange: the black-and-whites of the determined women with set faces, faded gingham aprons and straggling hair, surviving the locusts and the dust storms in sod homes. We look at these photographs and feel awe at what these people faced. When we hear about an entitlement nation in moral decline, whether embedded in harangues on Fox News or through the nostalgic lens of “Greatest Generation” retrospectives, this is the standard we think we’ve fallen from.

What’s striking about Tracy Letts’ play and screenplay is that it takes on the subject of the latter-day pioneers both as a lived experience and as a cultural legacy. Letts, an Oklahoma native, has crafted a story about the people who survived the frontier as well as the effect of those experiences on their descendants. To anyone raised on John Wayne or Louis L’Amour or even Willa Cather, Letts’ will be a subversive approach. His characters are not so much empowered by their frontier heritage as trapped by it: the older generation confined by hardship to narrow opportunities and the younger one hampered by guilt. "August: Osage County" is in this sense a cautionary tale, about how the past can be used as a weapon against the present, and, in a public culture in which nostalgia for a past America has reached a saturation point, the film is more immediately relevant than it’s been given credit for.

Letts’ specific focus is the Weston family: Beverly, an award-winning poet and “world-class alcoholic”; Violet, his drug-addicted wife (Meryl Streep, in an Academy Award nominated performance); their three troubled daughters; their sullen 14-year-old granddaughter; and a few more relations. When Beverly commits suicide, the family collects at their Oklahoma home, and the funeral proceedings quickly become a generational showdown between Violet and her oldest and strongest-willed daughter Barb (Julia Roberts, also an Oscar nominee for her role). The stakes are set in an early exchange:

Barb: We know you had a rotten childhood, Mom, who hasn’t?

Violet: You don't know! You do not know! None of you know, ’cept for…that man we buried today! Do you know where your father lived from age four till about ten…in a Pontiac Sedan. With his mother, his father, in a fucking car! Now what do you want to say about your rotten childhood? That’s the crux of the biscuit: we lived too hard, then rose too high. We sacrificed everything and we did it all for you. Your father and I were the first in our families to finish high school and he wound up an award-winning poet. You girls, given a college education, taken for granted no doubt, and where’d you wind up?...Who’re you? Jesus, you worked as hard as us, you’d all be president. You never had real problems so you got to make all your problems yourselves.

What person born between 1960 and 1990 could fail to recognize this scene? It’s the dialogue between a parent who had it rough and a child accustomed to the flush of prosperity, a widespread cultural conflict made more vivid by the frontier. Violet embodies, at a manic register, the older generation. She’s 65, finishing chemotherapy for mouth cancer, and grew up hard on the plains. Her single mode of operation, ingrained in her at the level of the instinctual, is aggression; she knows how to survive, but not how to connect. She is not a woman who will adjust in the face of the realities other people face: for instance, those of her daughter, Barb, the college professor, mired in suburbia with a philandering husband and a daughter who lectures her for not being a vegetarian. Violet’s willing to play dirty to get what she wants, one minute spitting contempt at her children and the next playing on their guilt. “You couldn’t come home when I got cancer but as soon as Beverly disappeared you rushed back,” she whispers piteously to Barb.

It is easy to watch this woman manipulating her family and dismiss her as something close to monstrous, and yet hanging over all of Violet’s viciousness is a sense of deep disappointment. Her early life shaped her personality: she “lived too hard and rose too high” so that, when she had the fine house and successful husband and three children, she had no way to enjoy any of them. Probably Violet’s key explanatory moment comes late in the film, as she sits on a rocking chair with her daughters and tells them about a present she desperately wanted as a girl:

Must’ve asked my momma a hundred times if I could get those boots. She started dropping hints about a package under the tree she had wrapped up…There was a pair of boots, all right...men’s work boots, holes in the toes, chewed up laces, caked in mud and dog shit. Lord, my momma laughed for days. My momma was a nasty-mean old lady. I suppose that’s where I get it from.

This is the voice of someone almost entirely determined by her early experience. She’s emotionally warped but nonetheless a force, capable of taking out her bitterness at her unfulfilled promise on everyone around her. The word Meryl Streep used to describe her in an interview was “thwarted,” and watching this acidly funny woman with the elastic face releasing her pent-up energies on her family is a reminder that surviving the frontier came with its own emotional costs.

If Violet is the manic focus of the camera’s attention, Barb is the film’s internally dynamic character: the daughter of the hardscrabble generation, who inherited her mother’s uncompromising nature but is dealing with a far more complicated circumstance. She’s a professor at the University of Colorado Boulder and her life calls for more qualities than just grit. Her 14-year-old daughter Jean is a wincingly recognizable product of millennial culture: faux-sophisticated, ironic and immature. Jean's face brightens once in the film, when she’s offered pot, and she’s more intent on watching a digitally remastered "Phantom of the Opera" than attending her grandfather’s funeral. Barb’s estranged husband, Bill, a college professor who knows the correct past tense of “forsake” and the better brands of Merlots, is a warm, underconfident man who recently lost weight, dyed his hair and started sleeping around with college students. The reason for his straying is not hard to discern: a wife who is too judgmental for him to comfortably survive. “You’re thoughtful, Barbara, but you’re not open,” he says at one point, essentially handing viewers Barb’s one-line character description, “You’re passionate, but you’re hard.”

Barb is effectively caught between Bill on one hand and Violet on the other. She can’t quite decide what model to follow: her mother’s uncompromising path or her husband’s laissez-faire approach. One is too harshly austere, the other’s too permissive. Barb wants a middle ground, but can’t seem to create one, and, when she comes home to Oklahoma the strain wears at her. Everyone who’s tried to take their parents’ best traits and dispense with their worst can at some level relate to this dilemma. What makes Barb’s path so hard is that her mother won’t ever retreat. She’s the howling id, the voice that refuses to go off, the ceaseless reminder of what her daughter owes to her suffering, and how she can’t measure up.

What gives "August: Osage County" its eerie relevance is that we are hearing this voice across our country with uncomfortable frequency: the one that conjures up the past to shame the present and holds the virtues of grandparents up at the expense of their grandchildren. It’s a voice steeped in small towns, frontier rhetoric and constant moralizing, that presents itself as both independent and victimized, self-sufficient and needy. Letts has encapsulated this voice and its crippling effects in a single family, in a startling example of how art can reflect the culture back at itself. He has rendered, with brutal concreteness, what happens when members of an older generation hold their formative experiences too close, at the expense of newer realities.