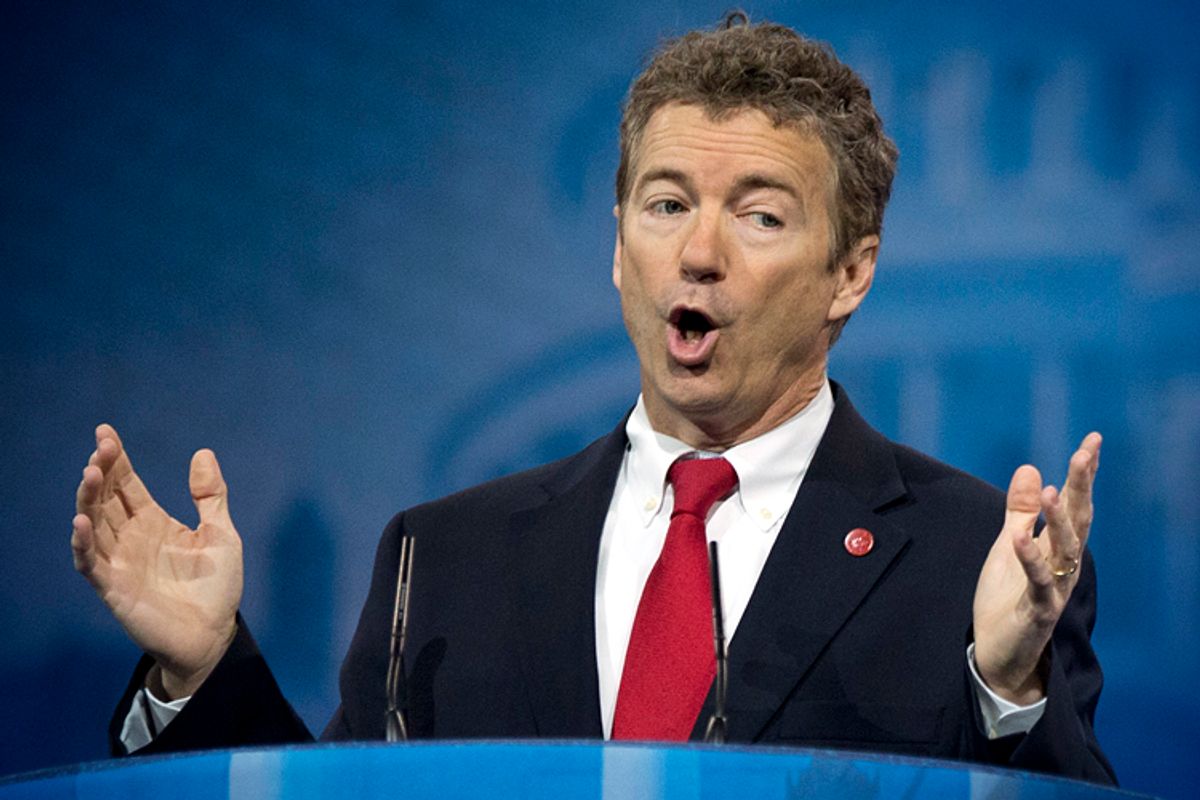 Evidently sensing that the Republican Party may be in some kind of crisis, Sen. Rand Paul, R-Ky., argued at a recent fundraiser that the GOP should embrace the tenets of his pet political philosophy, libertarianism. But Paul didn’t just suggest a conversion from long-held Republican values to libertarian ones; rather he tried to make the case that libertarian values are already consonant with the moral systems that underpin many foundational Republican positions. One of his main rhetorical goals was, therefore, making Christianity and libertarianism seem compatible, to attract traditionally Christian GOP supporters to libertarian ideas.

Even leaving aside the bizarre gesture of pure convenience to Christianity, which seems to have been brought in here as a post-hoc rhetorical flourish to do little more than sweeten the libertarian pot, Paul didn’t make a great case for the actual compatibility of Christianity and libertarianism.

"Libertarian and liberty doesn't mean libertine," Paul claimed at the gala for the American Principles Project, referring to the tendency of libertarians to prefer government not intervene in various spheres of life, often including the realms of marriage, contraception and abortion. Paul was unclear as to whether he believes the state should have a role in the regulation of marriage and abortion, saying instead, rather cryptically, that “Freedom needs tradition to give it its balance and its stability, its sense of family and community, but tradition needs freedom to invigorate it and give it spirit and excitement.”

If what Paul intends to say here is that Christianity and libertarianism are amenable to one another because Christianity provides the moral compass libertarianism doesn’t have – that is, that one can protect marriage and defend against oft-objected to practices like abortion through the selective reference to Christian values by otherwise libertarian political agents – the question is: Why would someone with such a commitment to Christianity ever commit themselves to a political philosophy without a similar commitment?

That libertarianism needs the moral framework of a separate philosophy imported into it to prevent it from becoming, as Paul put it, "libertinism" only indicates that libertarianism itself does not begin from the moral framework of Christianity. Instead, it requires that Christian ethics be tucked into it after the fact, if there’s anywhere for them to fit. GOP Christians tempted by Paul’s proselytizing should ask themselves this: If libertarianism arises out of a wholly separate ethical framework than Christianity, what authority underlies that framework, and why should they, Christians, respond to it? Moreover, why make oneself beholden to a philosophy that uses Christianity as a mere instrument to support itself morally, rather than one that responds to Christianity as its ultimate and final ethical authority?

When it came to the difficulties Paul had in making his Christo-libertarian case, this was only the tip of the iceberg. In arguing for his oft-cited policies of prison and sentencing reform, he said,  “As Christians who believe in forgiveness," noting that overly long sentences and penalties such as felon disenfranchisement violate that principle and harm those who "deserve a second chance." Here, Paul seems right on the money: The reality for Christians is that the guiltiest are those most in need of mercy and forgiveness, and our current justice system promotes neither value, resulting in the unnecessary destruction of so many lives and communities.

Yet Paul’s reasoning here doesn’t stand up to the scrutiny of consistent application, which weakens his claim that libertarianism and Christianity are well-committed philosophies. He’s willing, for example, to have mercy on those guilty of crimes by reducing prison sentences, returning felons the right to vote, and doing away with mandatory minimum sentences. This all fits well with Christ’s call for service to “the least of these” – outsiders, criminals, the poor, the hungry, the sick. But what does Paul imagine in terms of shaping the state to show mercy to people in those other categories? What provisions should the state make for, say, the sick and the poor?

In these arenas, Paul’s interest in mercy and the justice of the Gospel seems to mysteriously dry up.

Consider his policy on the delivery of healthcare, as described to a group of University of Louisville medical students in 2013: “I think we as physicians have an obligation. As Christians, we have an obligation ... I really believe that, and it’s a deep-held belief … But I don’t think you have a right to my labor. You don’t have a right to anyone else’s labor.” Paul’s gambit here was to define healthcare not as a right but as something altogether different – and unenforceable. Of course, no one proposes any healthcare policy that would force doctors to labor, only those that would offer doctors money to work, a system under which they already presumably operate; in universal healthcare plans, the payment would just come from a different source than insurance companies or individuals. But Paul is clear: While physicians might have some kind of vague moral obligation to lend a hand to the poor, the state should not, in his view, legitimize that duty by expanding universal healthcare to all. Why the state should exemplify and extend Christian forgiveness and mercy to the criminal but not the ill is anyone’s guess.

The same curious hesitance toward outreach applies to Paul’s policies on poverty. His solution for aiding the impoverished in America? “Economic freedom zones,” or areas targeted for tax decreases and other incentives to create jobs and generate wealth. Unfortunately for Paul, this hands-off approach to reducing poverty has been tried, tested and proven to fail, featuring “no significant difference in economic growth or job creation inside the enterprise zones from the surrounding area.”

It is difficult to define as forgiving, merciful or even just the repeated insistence upon a policy that is proven to be ineffective; but this again suggests that it is not that Paul’s Christian ethics of concern for the poor underlie his politics, but rather that he hasten to fit something resembling a Christian ethical interest in the poor after he’s already settled on his political conclusions. Thus, he reaches for what’s available to him within his selected set of political options, ignoring those that might be more effective and ethically responsive to Christian imperatives to render justice to the poor because they’re politically inconvenient for him.

Christianity is a politically inconvenient religion. It features, rather than a clear-cut and easily referred to legalism, what theologian John Milbank called “the anarchy of love.” Paradoxically this does not mean that Christianity is a religion that resists states, but rather that its premises always precede them, and that the choices people make in constructing their governments are always subject to the judgment of Christian ethics. Paul’s attempt at a makeshift peace between libertarianism should seem shaky and loose to his intended GOP converts because it is, and because it is an attempt not to demonstrate that his positions grow out of Christianity, but that they can perhaps, with some elbow grease, tolerate its presence. For Christians, this can’t be enough.