Rapper/poet Mykki Blanco: "I grew up wanting to be Yoko Ono" 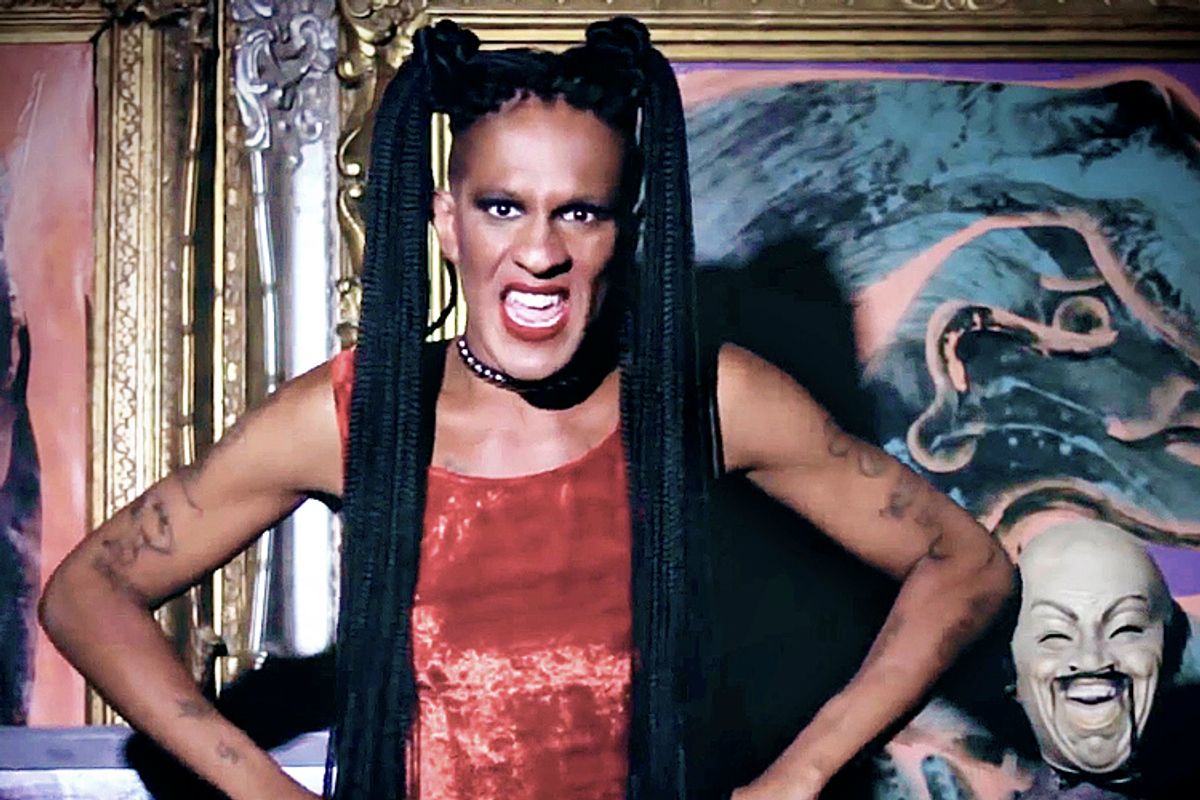 In a neighborhood near the brass trumpets of the French Quarter, a black cat scurries off the sidewalk leading to the club. From the front pillar, a mounted rainbow flag quietly sways next to the city’s own banner. No one sits on the patio furniture. Neon pink lights glow above the doorframe.

Inside, Mykki Blanco, the rap persona of artist Michael Quattlebaum Jr., drapes her baby-blue faux-fur coat over the back of a chair. She’s wearing a frayed sweater, gold talon earrings, and a black cap with "Tales from the Hood" written in red letters. Currently in the process of moving to New Orleans for a stint, Mykki stops in this club – known for its clothing-optional back yard – to sip a gin and tonic.

“At this point there are so many gay artists making music who are just continually overlooked by the mainstream,” she said. “No matter the quality of the music, their careers don’t seem to not be considered niche.”

For the past two years, the artist says she's worked “super hard,” dropping a couple mixtapes and the EPs: "Cosmic Angel: The Illuminati Prince/ss" and "Betty Rubble: The Initiation." Blanco’s music videos present mind-melting – and sometimes frightening – visuals over wicked-sounding beats. Her innovative sound and aggressive aesthetic have helped her carve out a unique and worldwide fan base. Her success led to an international tour, and she is slated to work with a few well-known producers this year.

“I saw Mykki perform live and everything clicked,” said Jeremiah Meece, who produced “She Gutta,” Mykki’s most recently released song. “There’s parts where [she] was doing stuff with minimal microphone or no beat behind [her] – just primal, screaming lyrics out at the crowd.”

In her videos, Blanco serves up a gender-bending mix of glamour and punk rock, which a lot of people get hung up on when talking about her work. She recently wrote on Facebook, "I’m over gender. I’m into species."

“When the music industry stops deciding to treat women like objects,” she said, “then gay artists and the femininity that they imbue will also be respected. The direct link to homophobia comes from misogyny.”

In a post-Macklemore world, a lot of people want a high-visibility queer rap star. But Blanco's not necessarily interested in being a mainstream rapper, queer or not.

Raised in California and North Carolina, Quattlebaum read biographies of people she “felt similar to” – Madonna, Vincent Gallo, Basquiat. As a teenager in Raleigh, she started the performance collective Paint In Consciousness Experimental Theater and won an Independent Spirit Award for the project.

At 16, she grew fidgety from devouring radical literature in North Carolina and decided to leave town. She took 100 dollars from her mother’s purse and boarded a Greyhound bus to New York City. “I left home really out of this kind of like anarchist-punk phase,” she said. She stayed out all night and remembers sleeping in bookstores or crashing at a drag queen friend’s place. From interning at Elle Girl to dancing on tabletops for $50, she stayed in New York for about three months before her mom convinced her to move back home. She moved back to the city in 2008 to attend Parsons, but eventually dropped out.

“When I came to New York I wanted to do installation, sculptural stuff,” she said, “but then I found that writing just is what came easiest.”

Around the Nicki Minaj and Lil' Kim fallout of 2010, Quattlebaum created Mykki Blanco as a video art project about a teenage girl who wanted to become a rapper. At first she shot YouTube diaries spitting freestyles and talking about her career aspirations. Ohwow published Blanco’s first book of poetry, "From the Silence of Duchamp to the Noise of Boys" in 2011 and she started performing the poems along with Mykki material. Her rap career eventually took off with the Internet’s help.

In “Haze.Boogie.Life," a video with over half a million views on YouTube,  Blanco raps, “It’s a war out here, the real versus the gimmicks/ They all wanna be stars but they heart ain't in it.” Her lyrics can go from playfully cheeky to straight cutthroat and damning. Her attitude can feel like a call to arms – to be brash and unflinching.

“I get sent a lot of tracks and I look for the ones that stand out,” said Danny Sangra, who directed Blanco’s “Haze.Boogie.Life” and “Feeling Special” videos. “You wait for the ones that have an energy that sets them apart, and Mykki just has that.”

The "Haze.Boogie.Life" video was shot in London, with Blanco wielding a baseball bat -- Sangra says onlookers were scared of what she was going to do with it. For the video, Sangra says Michael was the tough side, Mykki the sexy one.

“Within a lot of the hip hop community gay rappers or queer rappers is a hard pill to swallow,” said Sangra. “In the ‘Haze.Boogie.Life’ video no one could pigeonhole what they were watching.”

A few days before sitting down at the New Orleans club, Blanco released a song called “She Gutta” – a head popping, gliding track. When she started rapping, her sound came off more low-fi, but “She Gutta” sounds just about dance ready. The song’s music and lyrics are, like all of Blanco's work, supremely confident.

Meece says Blanco exudes an internal power -- she'd be able to perform poetry without a microphone in a large room and captivate everyone there.

“Even though Mykki writes songs in the theme of rap music and modern tropes, I feel like [she’s] coming at it more as a poet,” said Meece. “It’s in this visceral, tactile way of letting something out. It seems almost necessary and therapeutic.”

“She Gutta” may seem like a move toward a more palatable and understandable sound for rap fans. But Blanco says the song actually marks a transition for her as an artist. In some of her next releases fans can expect a return to her more theatrical, artsy sound.

Throughout her career, she's taken a multidisciplinary approach to her work. The cross-dressing, mutant-loving rapper named Mykki Blanco emerged an extension of this process.  She believes music reaches people faster than other art forms, and it can help establish a fan base. But she wants to be known more for her ability to tell “diaristic-electro-bitchy stories” than for her career as a rapper.

“I’m just gonna throw the typical song structure completely out the window,” she said. “People are going to be able to expect weirder stuff.”

Blanco’s critique of mainstream modes of success follows in the footsteps of Basquiat and other artists of the late ’70s early ’80s. At the time, galleries started showing more photography, so artists in other visual media were forced to think outside the traditional structure. By displaying their work in guerilla venues, young artists developed their work in a realm outside of commercial appeal.

“Anyone who constantly evolves like Mykki is going against that mainstream way of getting famous or popular,” said Danny. “To get quick fame you have to do the same thing over and over again.”

In Blanco’s case, the decision to forgo avenues of popular success – or market herself as “gay rap” – could have a big impact on the future of the Internet generation’s art and music.

“The ‘quote unquote gay rapper’ people want is going to come around,” she said. “There are already people pursuing such a career but they just are not as recognized.”

After her second and final gin and tonic, Blanco cocks her head to the side.

“To young gay musicians and artists, be aware of how the music industry or people within any industry are trying to market you,” she said. “For a minute I got kind of caught up in this whole ‘gay rapper’ thing, but now I don’t feel like music is my battle to fight that.”