Republicans will miss Leno because he was terrible 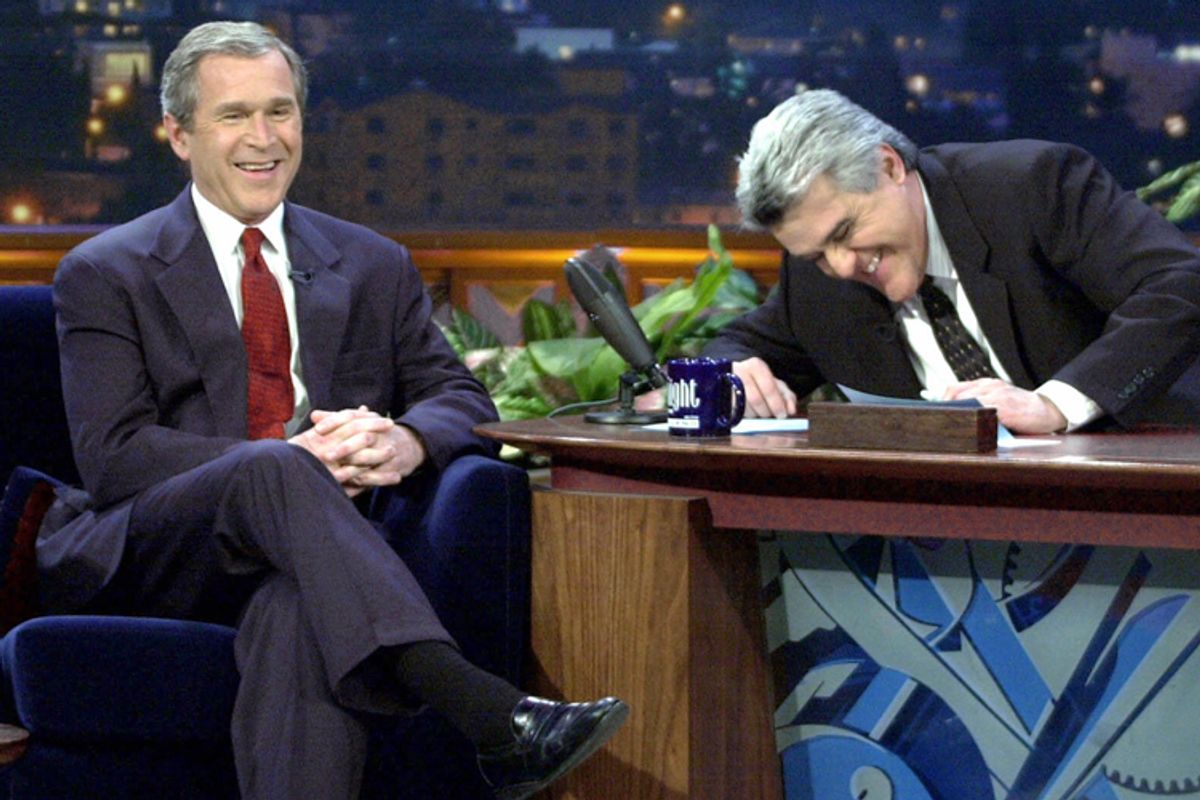 Beloved sorta-funnyman Jay Leno has been forced into retirement, for a second time, by the cruel corporate bigwigs of NBC and their pet usurper Jimmy Fallon. America will mourn his departure, at least until Jeff Zucker gives him a CNN show. Who is hurt the most by Leno's ouster from "The Tonight Show"? Besides people with some sort of "celebrities in small cars" fetish? It is, as Politico reports, Republicans.

Calling Leno his favorite late-night host, McCain said Leno would do little things like making sure there were cupcakes in the green room (McCain’s favorite) or show the senator around his car collection.

“That’s just the kind of guy he is,” McCain said. “Another reason I like him so much is he uses humor but he doesn’t have the sharp edge that some others do, the kind of put-down that is popular with some others.”

There are a few cute things about this comment from Sen. McCain. First, there is McCain's own well-documented proclivity for jokes predicated on, to use his elementary school-derived term, "put-downs." Second, there is the fact that McCain was for years a favorite guest and welcome presence on both Letterman's "Late Show" and Jon Stewart's "Daily Show" (where he was for a time the most-frequent guest of all time) until his 2008 presidential campaign, when he suddenly stopped appearing on those shows. After McCain's canceling on Letterman at the last minute led to weeks of nightly excoriations by the irked host, McCain made a disastrous apology appearance, which helped to illustrate the actual reason politicians preferred Jay to Dave: Dave is actually a tough interviewer who doesn't accept bullshit. Letterman is easily the best interviewer of the current late night hosts, which is a better reason for politicians to avoid him than the partisan breakdown of the targets of his monologue jokes. (The Comedy Central shows aren't mentioned in the Politico piece -- and neither, for some reason, is Jimmy Kimmel, ABC's late night host.)

What Republicans are actually looking for is a host who won't surprise them by asking serious questions and expecting substantive responses. On that front, you could always count on Jay, as GOP strategist Mark McKinnon explains:

“Unlike other shows, specifically Letterman, Leno and his team always went out of their way to make candidates feel welcome and, more importantly, prepared. There were never any surprises,” McKinnon added. “The guests always knew ahead of time what they were likely to encounter on stage...."

And that's what makes for great TV: completely forestalling the possibility of any surprises.

Considering Fallon's propensity for apolitical humor and his generally fawning reception of guests, Republicans need not worry too much about appearing on his show, though he may not go quite as far as Leno in accommodating their desire to not ever be surprised by a line of questioning. Alas, there's nothing they can do about the absurdly out-of-date Lewinsky joke-shaped hole in late night television named Jay.