Scarlett Johansson's Oscar snub: Why her supporting turn was perfect

The actress may have been invisible in "Her," but her perfectly calibrated performance deserved to win 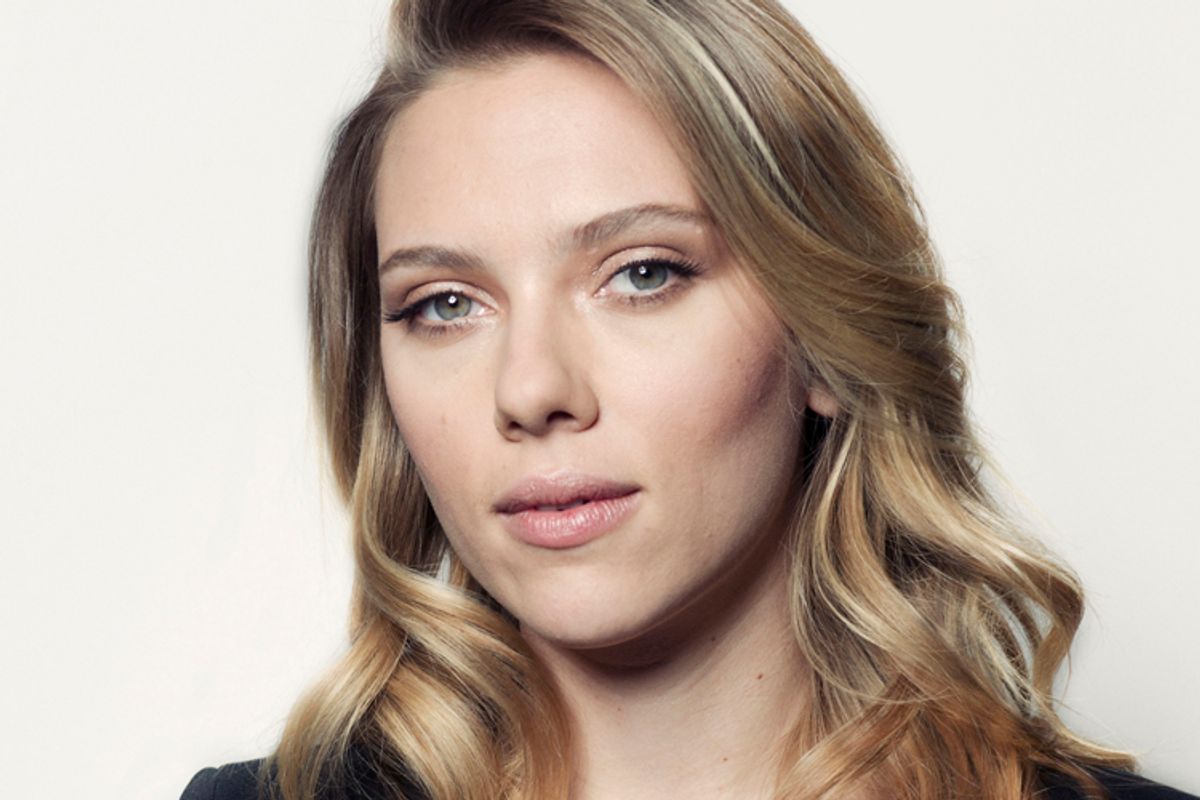 The year's closest Oscar race may well be between Jennifer Lawrence in "American Hustle" and Lupita Nyong'o in "12 Years a Slave." Both of those charismatic and well-liked actresses (one a young veteran, the other an older newcomer) have been widely discussed within the context of their best picture-nominated films -- Lawrence, as Rosalyn, provides the charisma that Christian Bale's scenes lack in "Hustle," while Nyong'o, as Patsey, counteracts lead actor Chiwetel Ejiofor's optimism and strength with a broken, brutalized humanity.

Both of these actresses did a great job of fitting into big ensembles. But -- director Steve McQueen's claims that he had auditioned a thousand actresses aside -- "American Hustle" and "12 Years a Slave" would work, if less well or differently, with different actresses in those roles. Replaceable, too, are the other best supporting actress nominees: "Nebraska," "August: Osage County" and "Blue Jasmine" would work (and, in at least one case, work better!) with different actresses playing the respective salty mother Kate, embittered daughter Barbara, and befuddled sister Ginger.

Scarlett Johansson's performance as Samantha in "Her," on the other hand, gets to the heart of what it means to be an indispensable supporting actress. The movie does not begin or end with her on the scene; it's about Joaquin Phoenix's character, Theodore, overcoming sadness following his divorce, a process catalyzed by Samantha's warmth and, well, support. Samantha is alternately understanding, pushy, probing and sweet; her own quest for fulfillment mirrors Theodore's, but is not the main show here. Johansson's not the lead, but is so closely entwined with the central action of the film that if her performance hits any false notes, the whole enterprise collapses. A "Her" in which the hero's journey toward self-forgiveness is aided by a less inviting and curious helpmate is a "Her" that's incoherent. (Director Spike Jonze likely agrees, as he recast Johansson in the role after scenes shot with initial casting choice Samantha Morton didn't meet his specifications.)

There is, of course, the little matter of Johansson's invisibility. The actress doesn't appear on-screen at all in "Her" -- playing a computer operating system, she's a voice emanating from an artificially intelligent machine. Much attention was paid to whether Johansson, who's never been nominated for an Oscar, would even be eligible; the Golden Globes, which have nominated her four times, disqualified her this time around.

And, indeed, Johansson was eligible for an Oscar -- but just ignored by voters. There have been word-of-mouth campaigns for performers not seen on-screen in the past, like Robin Williams' voice performance as the Genie in "Aladdin" or Andy Serkis' motion-capture roles as Gollum in "Lord of the Rings: The Two Towers" and Caesar in "Rise of the Planet of the Apes." None ever caught fire. It seems there's no written rule against a voice-only performance making Oscar's shortlist, but certainly there is a taboo.

And that's too bad. Because Johansson's performance was hailed by critics as a great voice performance, one in which the star fought against the limits imposed by the plot and created a character out of just her vocal chords. And that's true. But Johansson also, more than any of the five actresses nominated this year, defines what great supporting acting is.

This year's best supporting actress category is strong across the board, but lacks a Johansson: an actress who, in a smaller role, helps to make the movie exactly what it is. Lawrence, in "American Hustle," provides such great comic relief that, indeed, she seems to be coming from an entirely different movie; so does June Squibb, who's quite funny in those scenes in "Nebraska" that most strongly typify that otherwise quiet and poignant movie's problems with tone. Sally Hawkins' role in "Blue Jasmine" recedes from memory -- replayed in the mind, the film seems to be Cate Blanchett's one-woman show. Julia Roberts plays the protagonist of "August: Osage County," and was placed in the supporting category so as not to compete with Meryl Streep in the best actress category.

Only Lupita Nyong'o, whose portrayal of utter degradation at the hands of Michael Fassbender's Epps is McQueen's most potent instrument, comes close to doing what Johansson does in "Her" -- using her screen time to meaningfully contribute to what the movie is attempting, instead of creating her own little sideshow within the plot's parameters. Perhaps it's because of Johansson's ghostlike transparency in "Her" that she, playing against the movie's lead actor, manages to remake the entire project in her own image.

The best supporting actress usually goes to one of three sorts of performers. There's the actual lead or just-short-of-lead actresses, who get so much screen time it's not really fair they're in the category (Jennifer Connelly in "A Beautiful Mind," Catherine Zeta-Jones in "Chicago," Renée Zellweger in "Cold Mountain"). There is the star who delivers a brief but memorable performance that has no real bearing on the plot of the movie (Anne Hathaway in "Les Misérables," Jennifer Hudson in "Dreamgirls"). And there's the actress who's involved in the action of the film but whose performance is so tonally different from everyone else's in the movie that they draw focus to themselves whenever they're on-screen (Angelina Jolie in "Girl, Interrupted," Penélope Cruz in "Vicky Cristina Barcelona," Mo'Nique in "Precious," Melissa Leo in "The Fighter"...).

Many of the Oscar-winning performances I've just mentioned are fantastic. But many of them, too, raise the question of what it is to support. If you're part of an ensemble and, as Melissa Leo did in "The Fighter" or as Jennifer Lawrence does in "American Hustle," you wildly change the chemistry of the movie every time you enter the room, are you really supporting that ensemble? In "Her," Scarlett Johansson is nowhere to be seen, but is the very soul of an ensemble she fits into seamlessly. It's the sort of supporting acting the academy ought to honor more often.