Russia's Adelina Sotnikova took a surprise gold, and Japan's Mao Asada got a chance to shine 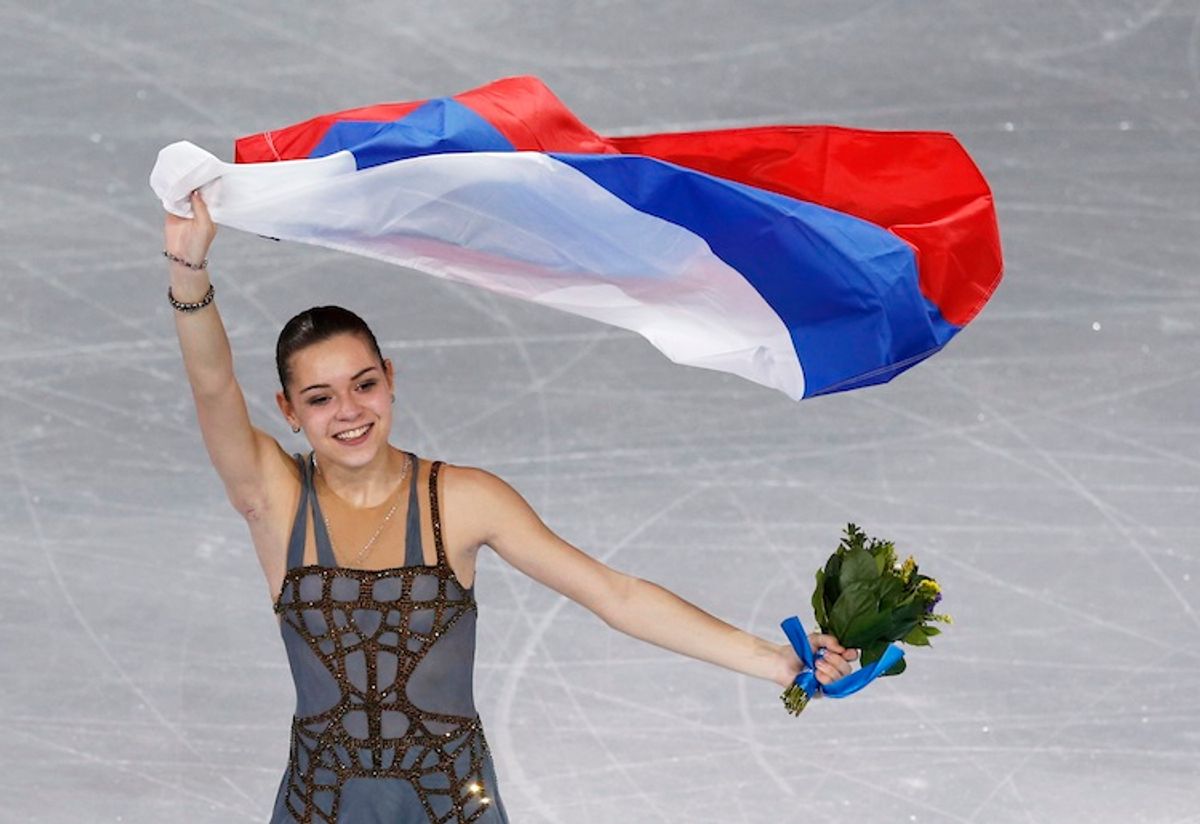 Let’s put aside, for now, the questions about whether Russian skater Adelina Sotnikova deserved to outscore defending gold medalist Yuna Kim in yesterday’s ladies figure skating competition. The scores are in. The medals in the event have been decided. No one has filed any kind of protest (at least not yet). Besides, other writers are already covering that same subject pretty thoroughly as we speak.

Since this is the last of Salon’s recaps of the 2014 Winter Olympics in primem,time, it would be nice to end on a positive note. And despite the somewhat baffling outcome of that skating event, there were plenty of positives to take away from NBC’s broadcast, which was, above all else, a testament to the admirable perseverance and determination of female athletes.

That perseverance and determination was illustrated in two different events: the skating and women’s halfpipe freestyle skiing. Both of these medal-awarding contests required strength, precision and an ability to overcome significant pressure. But in terms of how the athletes presented themselves, the events were radically different. The skiers were all bundled up, out in the elements, flinging themselves aggressively off of ramps and into the air, while the skaters wore spangly dresses, had their makeup expertly applied, and attempted to demonstrate both power and grace on the ice.

I’ve said in previous recaps how much I admired the way the female snowboarders carried themselves and supported each other during these Olympics. That admiration also includes the halfpipe skiers. As NBC correspondent Cris Collinsworth explained, this was not only the first Olympic appearance of halfpipe skiing, it was an appearance that honored the legacy of Sarah Burke, a Canadian freestyle skier who had advocated strongly for including the event in the games. Burke died in 2012, at the age of 30, after she fell and hit her head while practicing on the halfpipe. Each skier competing clearly had her in mind.

After American Maddie Bowman won gold, she told NBC’s Carolyn Manno that everyone competing was there to “make Sarah proud.” “She was an amazing skier, but she was an amazing person,” she added. “Every girl here tries to embody that. It takes all of us to fill her shoes.” I know the Olympics often tries too blatantly to make the home viewers cry. (Please see the Bode Miller incident from earlier this week.) But the sentiments expressed about Burke were so sincere that it was impossible not to be moved by them. The whole event was like a lovely tribute to her, one that her family was there in Sochi to witness.

You know what also moved me? The sight of American Angeli Vanlaanen after she completed her final, less-than-stellar halfpipe run. Vanlaanen didn’t win a medal. She finished in 11th place. But still, this woman who has dealt with Lyme disease for 15 years stood there and received her disappointing scores, with blood dripping out of her nose due to a previous fall, and just smiled and did that thing that all the snowboarders did: shrugged her shoulders as if to say, “Oh well. I tried.” Winning isn’t easy, of course. But losing is really, really hard. She did it with the best possible attitude.

And so did Mao Asada, the Japanese figure skater who medaled in Vancouver but messed up her short program on Wednesday badly enough to knock her out of medal contention. As Scott Hamilton and co. reminded us, Asada hadn’t successfully landed a triple axel all season; in fact, it was a triple axel that tripped her up the night before. But when she got on the ice on Thursday, knowing this was her last Olympics and that she had pretty much no chance of medaling, she skated like a champion. She hit the triple axel. She hit triple spins. She hit triple loops. She pretty much tripled anything that could be tripled and did it beautifully. Then, the minute she finished, she burst into tears, perhaps because it was all over or perhaps because she realized that, with that kind of skate, she might have earned a medal if only she hadn’t botched the short program.

It was an emotional thing to watch, and yet another example of perseverance. Ask someone a year from now which skate they remember from this competition. I bet Asada’s will be the one that comes to mind first.

Several other skaters slipped, tripped or outright fell, but kept going, including Yulia Lipnitskaya and American Gracie Gold. But the two most notable fighters were Russia’s aforementioned Adelina Sotnikova  and Italy’s Carolina Kostner. After having been left off of Russia’s gold-medal-winning team, Sotnikova clearly built up a fire in her skating boots, one that allowed her to bang out a performance on the ice with a huge smile on her face, galvanizing the Russian crowd in the process.

Kostner’s story was even better. She had screwed up in high-pressure Olympic games before and was hoping not to continue that trend. She didn’t; this time, she calmed down and skated a nearly flawless program that wasn’t weighed down by nerves. When she exited the rink, her choreographer hugged her. “Now do you believe in yourself?” she asked. “Now?” Did I tear up a little when that happened? Yeah, maybe. Look, I’m not a heartless, Olympic-watching robot. I have feelings that can’t be contained. Anyway, Kostner ended up winning bronze, the first medal ever for Italy in ladies’ figure skating. I may have been happier for her than I was for anyone else.

Yuna Kim is a fighter in her own right; she skated the same way she always does, like the equivalent of Audrey-Hepburn-in-a-little-black-dress on ice: elegant, classic, effortless. Aw, hell, let’s just call it like commentator Sandra Bezic did: “a performance for the ages.” So if something’s “for the ages,” it would seem like, in the now, it deserves a gold medal, right?

Well, like I said, that didn’t happen. As we’ve learned on many previous occasions, things in the Winter Olympics can sometimes get a little weird. We’ll be reminded of just how weird once again, when NBC airs that Nancy Kerrigan/Tonya Harding documentary it’s been teasing throughout these games. When you watch it and start recalling the details of the kneecapping heard ‘round the world, remember this: There are plenty of women in sports who compete and prevail and champion each other without all that dramatic, ugly, catfight business. There are skiers who ski in a respected colleague’s name, and there are choreographers who remind their athletes to believe. Thursday night reminded all of us of that.