Outrage is actually optimism: We're mad because people should be better

Anger is really a sign of hope -- and belief that the world can, and must, be better than it is 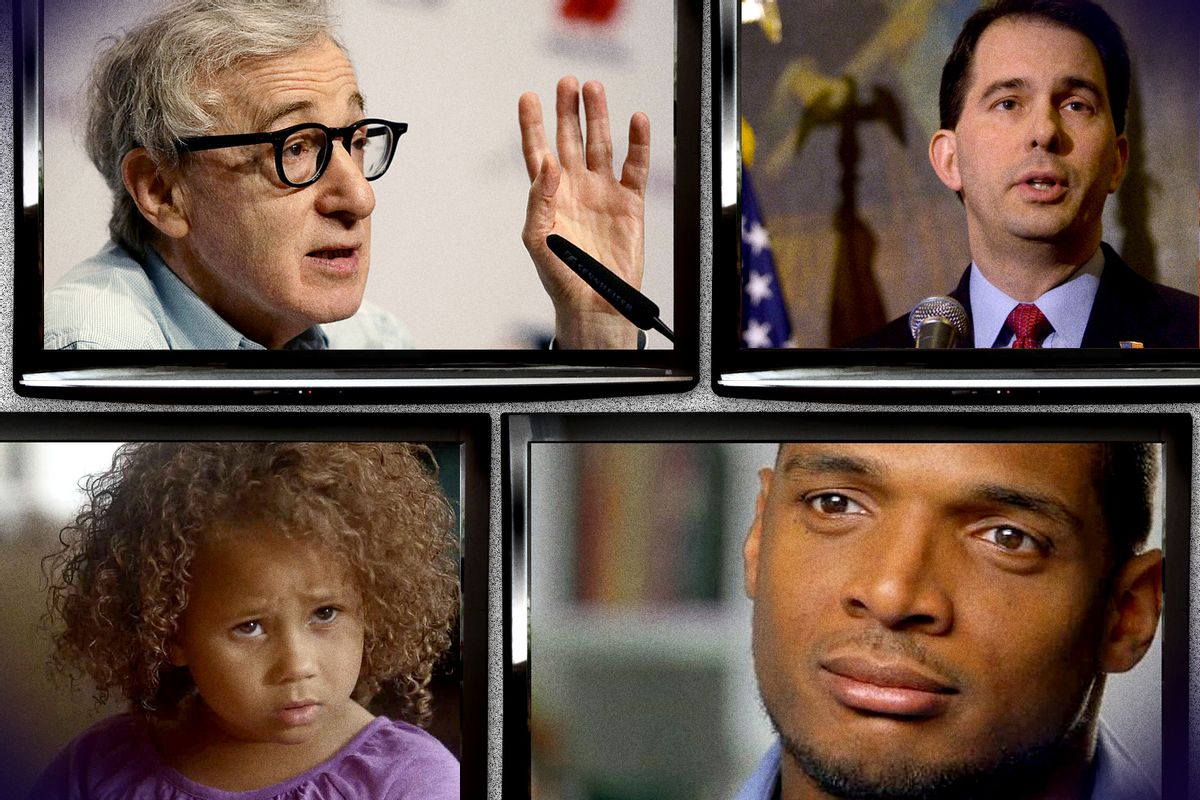 Excerpted from "The News"

1. Two emotions with which we’re likely to become extremely well acquainted the longer we spend with the news are fear and anger.

The news leaves us in no doubt that there are a lot of things in the world which we should be very scared about: extraterrestrial objects, mutating viruses, office furniture, technology … In relation to these and many other ills, the news directs us to adopt a distinctive stance: one of timidity, panic and fragility. Our chances of surviving the difficulties facing humanity are deemed to be very slim – though slightly increased if we habitually keep up with the headlines.

2. In its stoking of our fears, the news cruelly exploits our weak hold on a sense of perspective.

In the visual arts, having perspective means a capacity to see different things in their true spatial relations: what is far away looks distant and smaller, what is near looks closer and larger. It was surprisingly difficult for artists to learn how to achieve perspective on a canvas – which suggests that the manoeuvre may be equally challenging in other areas of our lives.

Applied to the news, having perspective involves an ability to compare an apparently traumatic event in the present with the experiences of humanity across the whole of its history – in order to work out what level of attention and fear it should fairly demand. With perspective in mind, we soon realize that – contrary to what the news suggests – hardly anything is totally novel, few things are truly amazing and very little is absolutely terrible. The revolution will not mean the end of history; it will just change a lot of things in many different small and complicated ways. The economic indices are grim, but we have weathered comparable drops many times over the last century and even the worst scenarios only predict that we will return to a standard of living we had a few decades ago, when life was still possible. A bad avian flu may disrupt international travel and defeat known drugs for a while, but research laboratories will eventually understand and contain it. The floods look dramatic, but in the end they will affect merely a fraction of the population and recede soon enough. Cancers and heart attacks have multiple causes that we may never understand completely, but eternal life was never on the agenda. Rome fell, but 600 years later everything was almost back to normal again.

Our capacity for calm ultimately depends on our levels of expectation: if we suppose that most things normally turn out to be slightly disappointing (but that this is OK); that change occurs slowly (but that life is long); that most people are neither terribly good nor very wicked (and this includes us); that humanity has faced crisis after crisis (yet muddled through) – if we are able to keep these entirely obvious but highly fugitive thoughts alive in our minds, then we stand to be less easily seduced into panic.

But we shouldn’t be surprised if this kind of stoicism is of no interest whatsoever to the news, for it has sound commercial incentives for overemphasizing our vulnerability. Naturally the news badly needs its audience to feel agitated, frightened and bothered a lot of the time – yet we have an even greater responsibility to try to remain resilient.

3. When news isn’t frightening us, it is often busy enraging us. The ability to post comments at the end of online news stories has revealed a hitherto unimaginable level of anger in the population at large. To judge from the comments, it would seem that most of us are completely furious most of the time.

Beneath the rage, one senses a touching belief that the problems of the world are basically solvable, it’s just they aren’t being dealt with swiftly or decisively enough for the simple reason, to  which every new day provides fresh testimony, that we are ruled by crooks and idiots. The relevant insights are there, just in the wrong hands. Herein lies a central paradox of the news: it gives us the tools to develop views on serious and consequential decisions which have a direct impact on our lives. It invites us to the conference table and into the parliament, it introduces us to the key players, then it shows us nothing but inexplicable delays, strange compromises and maddening evasions. It can feel as though we are daily being invited to watch helplessly while a close friend drowns behind a plate-glass window.

The news routinely tantalizes us with the promise of drastic change and improvement. It anoints certain politicians as visionaries and expresses confidence that they can fundamentally transform the nation within a few months of attaining office. It breathlessly awaits the arrival of the new head of the central bank, who might liberate the slumbering energies of capitalism. It takes us to conferences and encourages us to believe that the delegates might in three days of horsetrading solve some of the major issues of the globe, relating to economics, African poverty or the warming of the atmosphere.

Then everything falls apart. The politician turns out to be a fool and is dismissed as shallow and complacent, the central bank governor cites the behaviour of the bond market as the reason for renewed caution, the conferences get bogged down in petty squabbling and one or two of the delegates are even discovered to have cheated on their hotel bills.

If we’re tempted to leave comments with unpublishably foul language in them at the end of stories, it may be because the news is reluctant ever to provide us with a sufficiently rich set of descriptions of the problems that surround issues. The most logical solutions regularly look as if they were being ignored out of sheer stupidity. We ask with impatience and eventual fury, ‘Why don’t they just …?’ Without going too far in the direction of fatalism and trusting obedience, this righteous question should at once make us suspicious. It should be a cue for a range of serious answers, rather than remaining merely a rhetorical enquiry. What the news seldom bothers to mention is why things don’t change very much; why great power and resources can’t solve our difficulties at a stroke. It doesn’t induct us with any degree of subtlety into the genuine reasons for calling a decision ‘difficult’. It leaves us instead to assume with mounting fury that every ongoing problem can only be the result of intense laziness, stupidity or malevolence – and could be solved in a few relatively decisive and simple steps by someone intelligent and ingenious (perhaps the journalist herself).

Our rage would in large measure be appeased if we were made aware of the raft of complications slightly off stage which none of the parties have sought to draw attention to; if we were reminded that a so-called solution may set off a secondary wave of problems; if we were made to feel the pressures around the table and the miserably tough choices on the agenda and (in some cases at least) the essential goodwill of many of the participants; if we were richly inducted into why difficult decisions are difficult.

4. Though anger seems a pessimistic response to a situation, it is at root a symptom of hope: the hope that the world can be better than it is. The man who shouts every time he loses his house keys is betraying a beautiful but rash faith in a universe in which keys never go astray. The woman who grows furious every time a politician breaks an election promise reveals a precariously utopian belief that elections do not involve deceit.

The news shouldn’t eliminate angry responses; but it should help us to be angry for the right reasons, to the right degree, for the right length of time – and as part of a constructive project.

And wherever this isn’t possible, then the news should help us with mourning the twisted nature of man and reconciling us to the difficulty of being able to imagine perfection while still not managing to secure it – for a range of stupid but nevertheless unbudgeable reasons.

The news currently resists giving us the single most calming response one can offer to certain problems: evidence that they are normal and that they belong to a species which is intrinsically (rather than exceptionally) imperfect. In hock to the excitements and commercial advantages of rage, the news cruelly ignores the project of consolation.

The most significant fact of political life, which almost no news organization will dare to acknowledge – because it would at a stroke exclude half of its speculations and disappointments – is that in some key areas of politics, nothing can be achieved very quickly by any one person or party ; it would be impossible for anyone – not simply this fool or that group of cretins – to change matters at a pace that would flatter the expectations of the news cycle; and that in the case of certain problems, the only so-called ‘solutions’ will have to await a hundred years or more of incremental change, rather than a messianic leader, an international conference or a quick war.

5. In its thwarted optimism, the news is the disillusioned progeny of the Enlightenment. Refusing to square with human nature, it allows our hopes to smash constantly against the same shoals; it greets every new day with faux cherubic innocence, only to stoke up rage and disillusionment at our condition by nightfall. It posits the potential existence of a perfect world which is forever almost within reach but then curiously slips out of grasp at every step of the political process. It doesn’t do us the favour of conceding that in many respects we are a fundamentally – rather than incidentally -- incorrigible species and that we would at key moments be wise to forgo hysterical annoyance for deep and quiet melancholy.