Why I biked through the polar vortex (no, I'm not crazy)

If you live in a city with a strong bike culture, you're undeterred by the elements -- even the cold and the snow 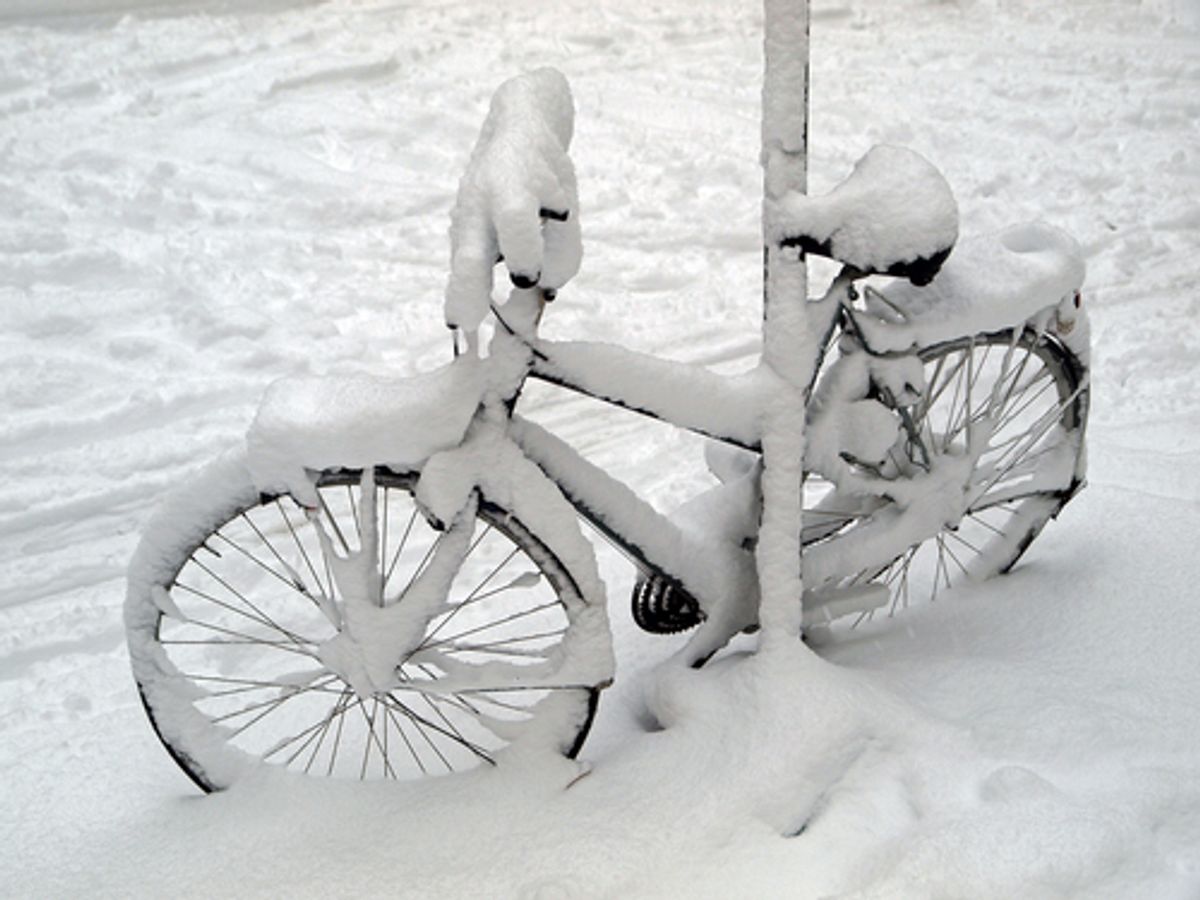 Yeah, I’m one of those crazy bikers who choose to pedal no matter what the weather. I grew up in a car-averse household in Toronto, and on mornings when most kids were being driven to school, my parents told me to bundle up and get on my bike. I didn’t like it at the time, but thanks to them, I’ve never seen cold weather as a reason not to ride.

And here’s the thing—though many commuters can't imagine making the trip to work without climate control, I’m not alone in my determination to keep riding, no matter the road conditions. Across the United States, many of the cities that boast the highest percentage of bike commuters are also known for nasty winters—places like Minneapolis and Madison, Wisconsin. Warm-weather cities like Austin and San Diego, where the sun always seems to shine, have far fewer regular riders.

It’s a puzzling phenomenon, but less so when you consider which cities have extensive bike lanes and actively promote cycling, explains Caroline Szczepanski, a spokesperson for the League of American Bicyclists.

“What we’ve found is that weather actually isn’t much of an issue if there’s a strong bike culture,” she says.

Minneapolis, for instance, has a phenomenal trail system, downtown bike share, and tons of organized events like bike-to-work days and group rides. Urban planning makes a difference, too. If the nearest grocery store is 10 miles away, you’re less likely to hop on your bike—regardless if it’s 5 degrees or 100.

Even in New York City, and with the help of a city-wide bike sharing program, more and more riders seem ready and willing to brave the elements. On January 7, NYC temperatures plummeted to 4 degrees Fahrenheit, the coldest day on record since 1896. That same day, CITI Bike proudly announced via Twitter that the bike share program had logged 6,669 trips. That number is far below the daily average of 35,000, sure, but it’s still evidence that not everyone sees a frozen thermostat and heads for the subway.

True, on the coldest mornings, my ride along the Hudson River bike path is less crowded. In balmier weather, the trail is buzzing with commuters pedaling downtown. But on that particular morning, with temperatures in the single digits, I had the trail mostly to myself, with my own personal views of the ice chunk soup forming alongside the river’s edge. The path was plowed—but only sort of. Worse, it was unsalted, leaving occasional patches of black ice, which for a cyclist means certain disaster.

And it was. Less than half a mile from my apartment, I wound up sprawled in a two-inch layer of snow and cursing the man who had walked across my path without looking. I swerved to avoid him, realizing too late that my tires had zero traction. The result was an unpleasant meeting with the cold, wet pavement.

OK, I thought, maybe I SHOULD take the subway.

But soon enough, I felt the satisfying crunch of salt crystals beneath me, and the snow and ice disappeared. I even saw a few more cyclists. Best of all, I felt sun on my face—sunlight I might otherwise have gone without during the dark winter days spent indoors. Maybe snow cycling isn’t so crazy after all.

This week, the 2nd-annual Winter Cycling Congress is being held in Winnipeg, a place known—even by Canadian standards—for its frosty winters. More than 170 participants, from engineers to urban planners to artists, will gather to discuss ways to make cold-weather cycling as mainstream as skiing and skating.

To do that, Anders Swanson, the director of the congress, says “people need to realize it’s actually possible—that there are, in fact, places in the world where many people ride throughout the winter and it’s totally normal.” After that, he says, ensuring bike lanes are well plowed and free from ice is essential so riders feel safe.

When I asked Swanson what city most resembles winter cycling heaven, he mentioned Oulu, Finland. “There’s something special,” he says, “about seeing grandmas passing you on a bike in the middle of February, going to bingo, or whole families riding home from the grocery store.”

Oulu, by the way, is located just 124 just miles south of the Arctic Circle.