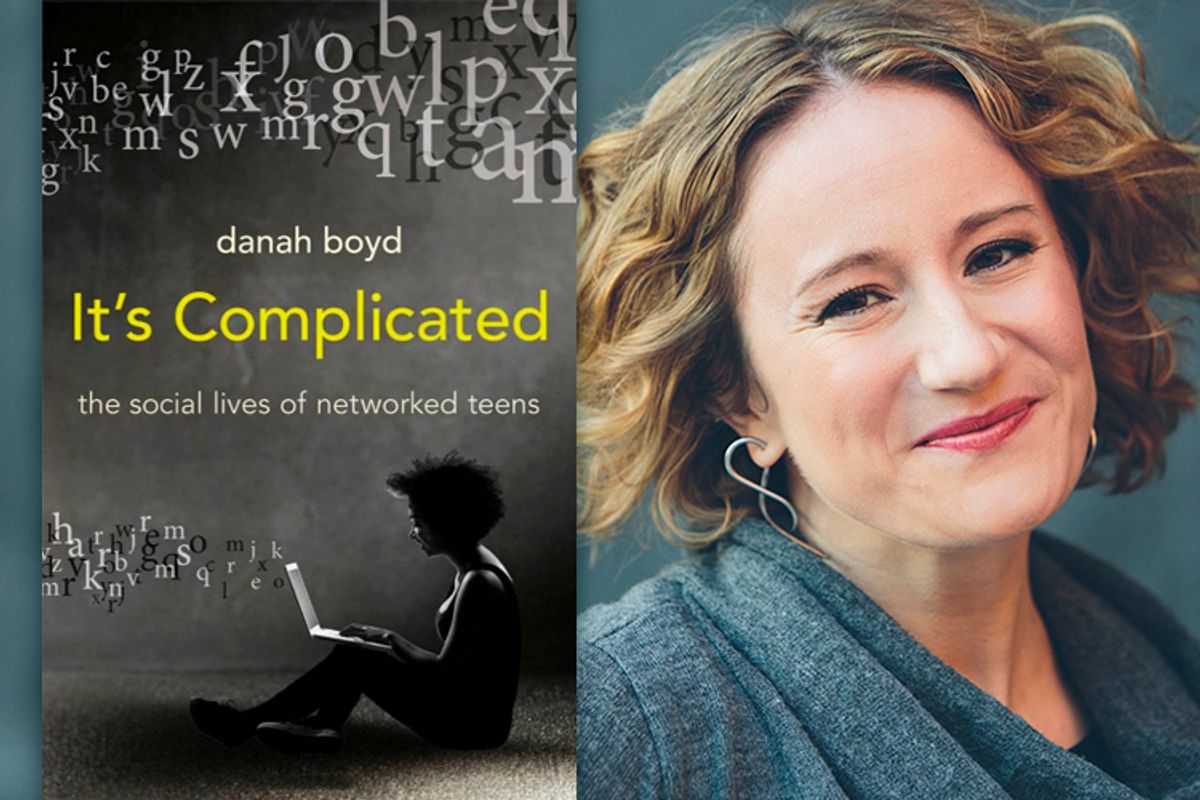 Ten years ago, if you were a technology reporter striving to make sense of the rise of Friendster and Orkut and Tribe.net -- this whole newfangled "social networking" thingamabob -- you were well-advised to visit the campus of University of California, Berkeley, where Danah Boyd was a graduate student working towards a Ph.D. from the School of Information." Nobody was thinking harder or more presciently about the implications of social media back then than Boyd.

She hasn't stopped since, through tours of duty at Google, Yahoo, Microsoft, New York University and Harvard's Berkman Center. As social media has become an essential part of all of our lives, Boyd has been participating in it, analyzing it and asking questions about it. Her primary focus has been studying how young people engage with social media, and February marks the release of her new book, "It's Complicated: The Social Lives of Networked Teens." One of its most refreshing aspects is how grounded it is in conversations with actual teens. "It's Complicated" is both a report from the front lines and a larger social analysis.

The book can be fairly described as a distillation of everything Boyd has been figuring out for the past decade, and it probes much deeper than just the latest fads in Twitter gossip or Snapchat goofiness. "It's Complicated" is as much about parenting as it is about teens, as much about how society is evolving as it is about Facebook. On one level it is designed to counter the paranoia and anxiety that many parents still feel about their children's engagement in social media. (No, all those hours spent looking into a screen are not making our kids more vulnerable to online predators, or socially maladjusted, or liable to be bullied.) But on another level it is a poignant critique of contemporary civilization. Social media is a place that lets teens be teens -- something that society, increasingly, does not. The briefest possible summary? The kids are all right, but society isn't.

Boyd took some time out of a busy week to talk to Salon by phone.

"It's Complicated" seems, in part, designed to reassure parents that it's OK for their teenagers to be heavily involved with social media. What explains all the anxiety that parents have?

Every parent wants to make sure their kids are going to be OK. The challenge for parents is how to help your children engage with the world around them and figure out their lives on their own. I think the challenge with technology, is that it is the thing itself that people don't understand, so they focus on it and they miss seeing what their kids are trying to do -- how are they trying to live, what are the very real social and emotional challenges that they are facing. There is no clear silver bullet to all this, but I think the basic answer really is for parents to calm down. Stress does not help the situation at all; it is all about approaching technology with curiosity rather than with fear and anxiety.

What exactly is it that teens are trying to do with social media?

They're looking for a space to hang out. When we grew up it was the mall or cafes or a variety of other physically grounded spaces. Teens today don't have access to those kinds of spaces and what they've done is they've turned to social media to regain some kind of access to public life. These new "networked publics" -- places like Twitter and Facebook -- are spaces that are created by digital technologies but they are really about people -- the broad network of people that teens have learned to negotiate and socialize around.

The networked publics don't have the same fundamental boundaries and structures that we think of with public spaces. And that gets a little quirky, because of course what happens online is that anything you can share can spread, and it also has persistence, it can stick around, it can be copied and pasted in all kinds of weird ways.

I think it is important to realize the underlying reasons why young people are engaging with social media are the same reasons that have always encouraged them to gather in physically grounded public spaces. They want to gossip, they want to flirt, they want to hang out, they want to joke around, they want to see and be seen. And all of that is really important because it is how identity is manufactured and understood. It's how teens figure out who they are.

One of the most provocative insights I came away with from reading "It's Complicated" is that we should understand teen use of social media as an effort to reclaim something that has been lost, rather than as some kind of seduction by the new. One theme of your book is that childhood has changed -- and not for the better. What's happened to society that drives kids to go online to fill this hole in their lives?

There are a variety of factors. Young people have moved from living in environments where they could easily get to their peers on their own, to being dependent on their parents. Suburbanization implies large physical distances between houses and friends. One of the aftereffects of school choice is that you are now drawing from larger jurisdictions from which your peer groups are drawn, so your best friends are likely to be a greater distance from you than they were historically.

You are very dependent on cars, and when you are dependent on cars it's all a question of whether you can drive. Not only has the driving age gotten older, but even if you can drive, your ability to get money to get gas or get your own car has declined. In the 1950s it was very common for teen boys to work after school. That is really rare now, across all socioeconomic sections. And in part that's because there just aren't jobs. McDonald's is now hiring 50-somethings!

There are also curfew laws --- that's a relatively modern invention that makes it difficult for teens to hang out together physically.

But then there's also this discouraging dynamic of upward mobility. This is the first generation of young people that are not going to be better off than their parents, and there are a limited number of college slots for them and college remains one of the key paths to upward mobility. So parents are under a lot of pressure to help their child to try and get into college, and they load them with after-school activities and test-taking prep and all the rest. Teens have no time to be teens.

All of it adds up to a funnel of pressures points, particularly for upper-middle-class America. And then you have young people in the middle of it, and all they want is a space and a freedom to call their own, to hang out and do all the things that they want to do -- which isn't always what parents feel are the important things. The irony of it all is that when they are given that space, when they are given that freedom of possibility, that is when the most profound learning occurs! As we place so much stress on education and prepare our children with all these formalist mechanisms, the cruel joke is that in our aim for more education we are sacrificing learning. And the personal learning that goes on where young people just hang out is so critical.

So we're really looking at things backward when we're obsessing with what kids are doing on social media? We should be putting more of a mirror on our own lives?

I think of the Internet as a relief valve. Given all of this other stuff that teens have no control over, all they want to do is just find a place to hang out. Along come these technologies at a time when these pressures have been building for decades and guess what, they are off to the races! Look at what we've got, we can hang out, this is awesome!

Teens seem to embrace these new "networked publics" very rapidly, but one chapter of your book annihilates the notion that teens are somehow "digitally native" -- that they somehow understand these new technologies more readily or more naturally than their forebears.

Go into an Apple store and watch teenagers get on Google and search things. The queries that they put together are startling. Because they don't have any sense of how a database works or a search engine works or why a computer scientists would say you should write a query this way -- that's not how they've thought about it, that's not how they make sense of it.

You have a new baby yourself. How do you plan to address his engagement with social media? Any direct advice for parents?

I'm really glad that I did this research project before having a child because it made me realize that the most important thing I could do is try to relax and try to be present. Very, very physical things. But in the long run my response as a parent is going to be to try to learn from him and ask him things so I can understand why he is doing what he does.

We should always approach technology with curiosity -- not with fear or anxiety. We should approach our kids, not in terms of telling them how to operate, but in terms of helping them think critically about what they are doing. I'm a big supporter of asking questions. You don't teach students by telling them, you teach them by getting them to think about what it is they are feeling.

It all comes down to communication, trust and respect.