Bosnia: The European unrest we should be talking about 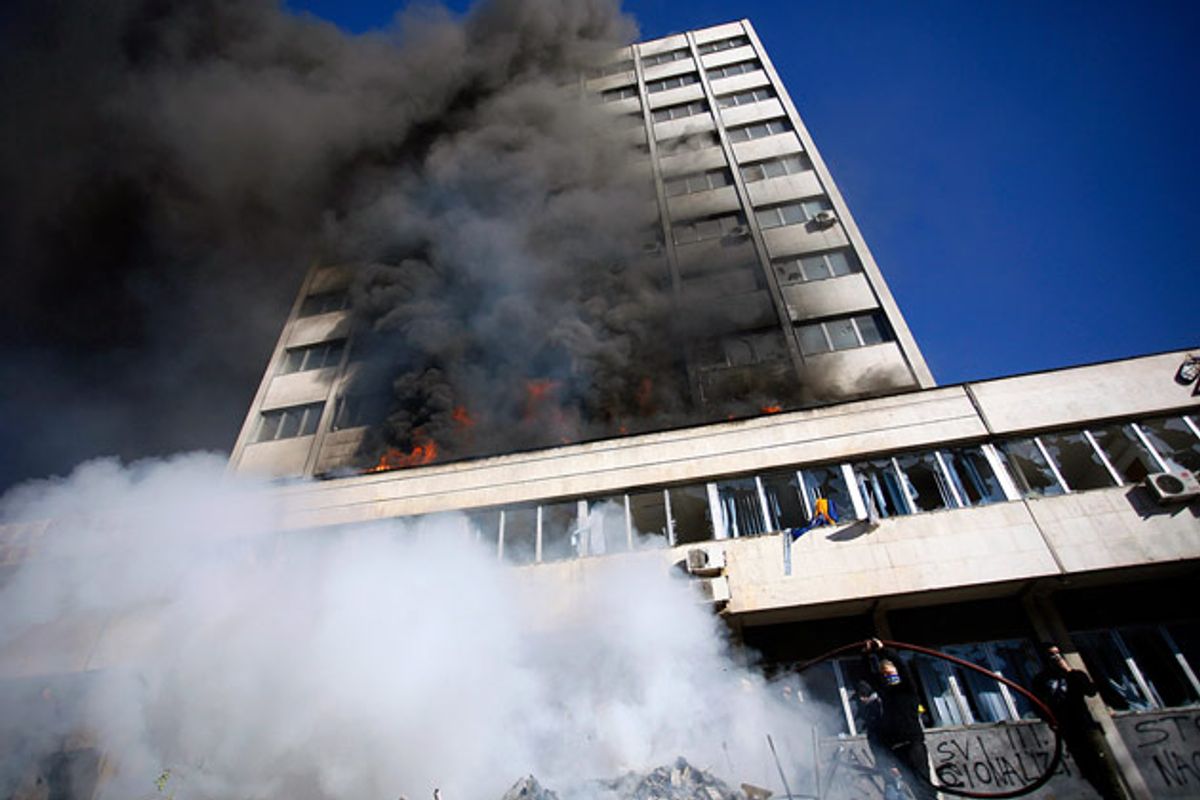 While the U.S. media focuses on ongoing turmoil in the Ukraine, with an uptick in Cold War-style geopoliticking, another Eastern European nation has been aflame with protest this month. Anti-government protests in Bosnia, involving tens of thousands of people, have focused on the fierce inequality and neoliberalism marking the postwar Balkan state. As anarchist writer B. Traven noted for CrimethInc, "Unlike the recent conflicts in Ukraine, this movement has eschewed nationalistic strife to focus on class issues. In a region infamous for ethnic bloodshed, this offers a more promising direction for the Eastern European uprisings to come."

In early February, protests -- initially organized around solidarity with workers who have for some years mobilized against the privatization of Bosnian companies -- took a violent turn when police brutally cracked down on demonstrators. Detailing the February upheavals and their swift escalation, Predrag Kovacevic noted:

[I]n Tuzla (formerly a large industrial centre), the workers of a bankrupt factory joined forces with an organisation of young activists to carry out a protest of relatively minor proportions in the city centre. Unexpectedly, the demonstrators were joined by huge numbers of people sharing their grievances. Some of the messages that were conveyed that first day were: the demand for a revision of privatization throughout the country, an increase of the minimum wage and the prosecution of corrupt politicians. It was clear from that afternoon on that nothing would be the same in Bosnia. Within the next two days, most key government buildings were in flames and protesters had occupied government buildings in Tuzla, Sarajevo and Mostar. Other protests were carried out in a whole range of small towns.

The significance of the Bosnian revolt is multifaceted. Commentators have noted that the escalated unrest marks the failure of the Dayton Peace Agreement (brokered by the U.S. to end the 1992-1995 Bosnian war). "While Dayton helped stop the 'ethnic cleaning' and mass murder that drew global media attention, it also created a largely dysfunctional and struggling state," wrote Georgetown law professor Mark V. Vlasic. Vlasic, writing a HuffPo column, called upon the U.S. to offer bureaucratic intervention, and for a European-style technocracy to be put in place. Vlasic's assumption -- that Bosnia should go the way of its neighbors toward a neoliberal nation state model -- does not reflect much of the prevailing sentiment of the current unrest. A liberal or neoliberal reading of the Bosnian protests, however, misses their significance as a class struggle. As Kovacevic put it, "the leftist, proletarian character of the protests in Bosnia asserted itself over and over again":

The liberal and libertarian currents, of course, saw the protests as a message against the corrupt state bureaucracy, the massive public sector and the meddling of the state with the free market. But although there were some anti-government demands among the protesters, most of them were attacking the government for protecting the wealthy tycoons who emerged from the wars of the early 1990s. With their obscene wealth, they bought factories for peanuts and then sold them to foreign investors for five to ten times the sum, thus multiplying their loot from the war. Of course, no liberal commentator tackled the question of the protesters’ demands for the revision of privatisation - and if they did, it was merely written off as a Utopian idea incapable of yielding any productive results.

The limits of Dayton in maintaining Balkan peace have not been determined by corruption and greed alone. A process of privatization and wealth concentration has left the Bosnian people impoverished and unemployed. The situation carries echoes of recent Greek history. As such, commentators urging the installation of a technocratic government should be wary of lessons from beleaguered Greece. And in Bosnia too (as in Greece, as in Ukraine) a rise in right-wing demagoguery has accompanied the social crisis. Interestingly, though, the Bosnian unrest has been colored by rhizomatic organizing and a revolution in leadership predicated on placing power in the hands of the Bosnian people. As one participant told B.Traven:

Protests are still going on, and people have organized themselves in plenums [assemblies]. Four cantonal governments have been forced to resign. Two of them are negotiating with plenums about forming governments of people who are not active members of any political parties. The authorities are fighting back hard—spreading fear of another civil war, arresting people, beating them, pressing charges for terrorism and attack on constitutional order... The movement is still continuing on a daily basis, the protests as well as the meetings of the plenums. The demands that are being made by the plenums are clearly social: the revision of the privatization process and the like. Politicians are terrified of losing their privileges, their positions, their wealth, and their freedom; this is causing different political parties to unite against their own people. They are using the mainstream media to discredit protests and plenum participants.

While the attacks on government buildings and the street clashes have quieted in the last week, the unrest in Bosnia is far from over and the political situation remains in flux. With media focus squared on the Ukraine -- unrest all-too marked by nationalistic fervor -- it is worth keeping an eye on Bosnia, where upheaval is opening up new modes of political organization with a fierce class consciousness.