The state's massive pork industry is wreaking havoc on the environment 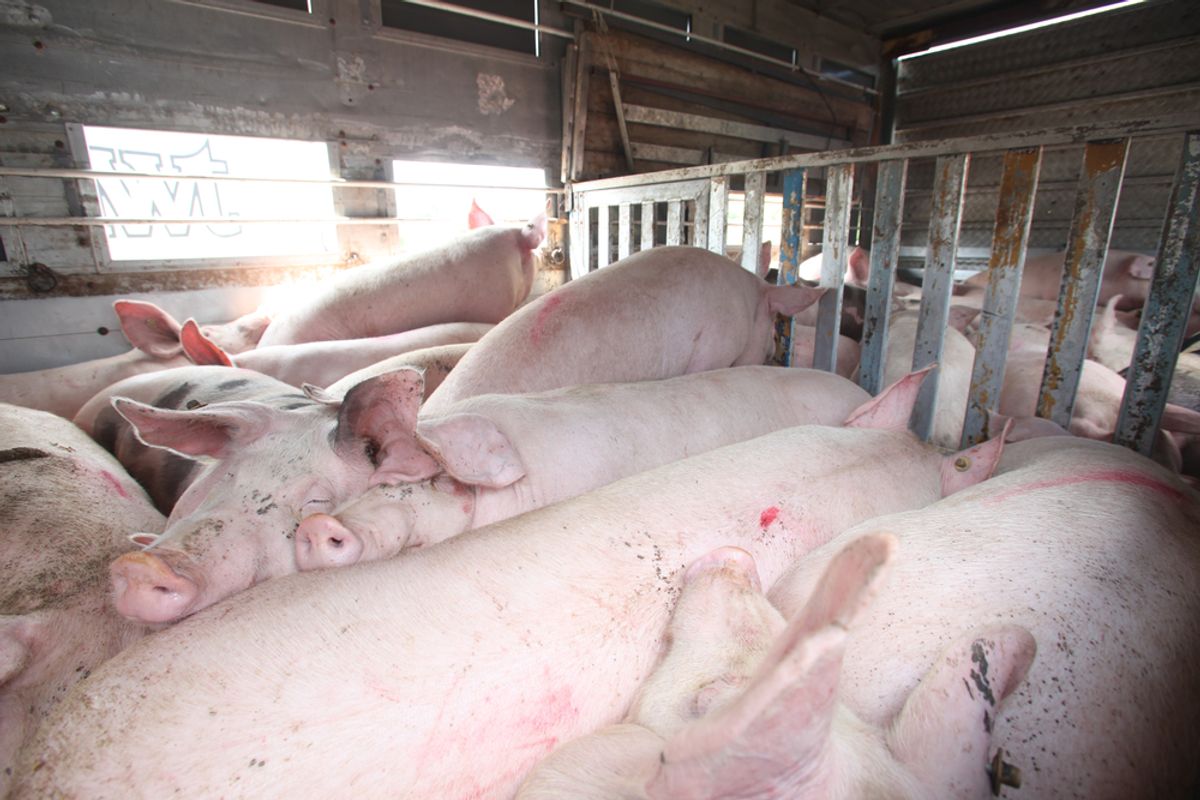 Iowa, the country's biggest hog producer, has a lot of pigs. Twenty million of them, more or less, with the vast majority crammed into its 8,500 factory farms. And where there are a lot of pigs, there's a lot of manure. Too much manure, according to journalist Ted Genoways. In an investigative piece for OnEarth, the magazine of the Natural Resources Defense Council, Genoways follows this inevitable byproduct of pig production to Iowa's waterways, where it's poisoning the drinking water supply.

Over 5 billion gallons of liquid manure are being produced by the state's factory farm pigs every year, according to the watchdog group Iowa Citizens for Community Improvement. And according to Genoways, the industry -- not to mention the ground itself -- isn't able to handle it all:

Large producers like New Fashion insist that the enormous, concrete-reinforced waste pits under each confinement—many with a capacity of 300,000 gallons—effectively prevent contaminants from leaching into the soil, and that manure is carefully managed by the Iowa Department of Natural Resources under laws aimed at accounting for all manure at all times. But mounting evidence suggests that an unprecedented boom in Iowa’s hog industry has created a glut of manure, which is applied as fertilizer to millions of acres of cropland and runs off into rivers and streams, creating a growing public health threat. Meanwhile, the number of DNR staff conducting inspections has been cut by 60 percent since 2007.

Between May and July 2013, as downpours sheeted off drought-hardened fields, scientists at the Des Moines Water Works watched manure contamination spike to staggering levels at intake sites on the Raccoon and Des Moines rivers. These two major tributaries of the Mississippi are also the usual sources of drinking water for roughly one out of every six Iowans. But at one point last summer, nitrate in the Raccoon reached 240 percent of the level allowed under the Clean Water Act, and the DMWW warned parents not to let children drink from the tap, reminding them of the risk of blue baby syndrome. (Nitrate impairs the oxygen capacity of the bloodstream; in babies and toddlers the syndrome can effectively cut off their air supply, rendering them a deathly blue.)

In one creative solution to the problem, companies are now selling bottled water designed specifically for infants. The government's response, on the other hand, has been less encouraging:

After the Iowa environmental groups filed notice of intent to sue in 2011, the EPA was finally forced to act. In July 2012 it issued a scathing critique of the DNR’s handling of the state’s factory farms, finding that it had failed to properly issue required permits for operating such facilities, to administer inspections, to respond to manure spills and other environmental violations, and to assess adequate fines and penalties when violations did occur. But nearly a year later, the state had still failed to take any action.

...Apparently fearing that the crisis would give the EPA leverage to intercede, Governor [Terry] Branstad took preemptive action. On May 20, 2013, he sent a letter to acting EPA Administrator Bob Perciasepe and Assistant Administrator Gina McCarthy, whom President Obama had nominated to helm the agency. Branstad denounced CAFO [concentrated animal feeding operation] compliance inspections as “the ‘gotcha’ approach.” He insisted that “the majority of discharges into Iowa’s waters are accidental spills” and claimed that runoff was unavoidable because it was “caused by Mother Nature.”

Finally, McCarthy met with Farm Bureau members last August and struck a deal that would allocate about $30 million to water quality initiatives. But Genoways contends that the gesture was too little, too late. "Scientists at DMWW point out that the Raccoon and Des Moines rivers have the highest and second-highest nitrate concentrations of the 42 major tributaries to the Mississippi," he writes. "The $30 million allocation, they say, is just too little to address such an enormous problem."