My father, the player

He flirts with every woman he sees, and in reaction, I'm practically a monk. Could we ever find common ground? 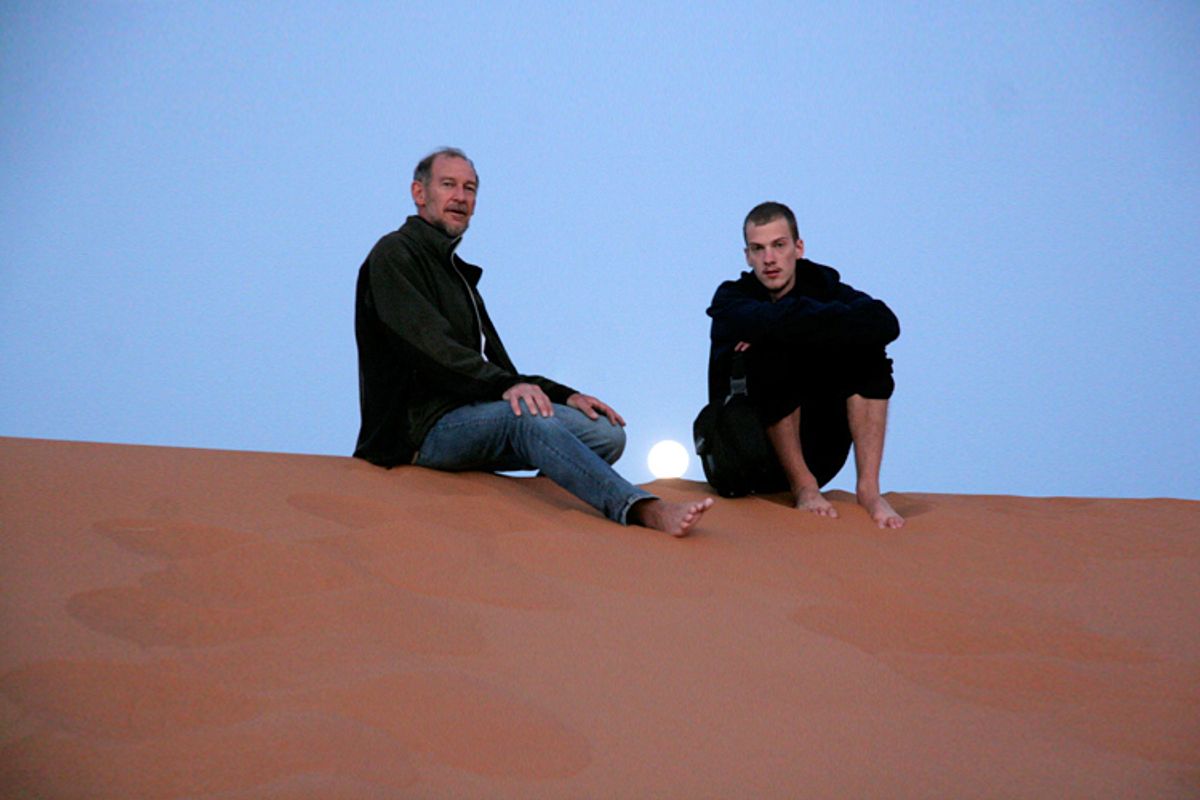 A photo of the author with his father.
--

We were having dinner on a rooftop in Morocco. Dad and I had been traveling for a week and were somewhere in the Atlas Mountains. It was supposed to be a father-son bonding trip, but Dad couldn’t stop flirting with women.

“Check them out,” he said, as two young women wheeled luggage to their room. A few minutes later they were seated at our table, and Dad was showing them photos on my computer. “This is where we went for a camel ride in the desert. I said to our guide, ‘Does this thing have instructions?’"

My forced smile came a beat too late, but no one seemed to notice. The girls were in stitches, and Dad was in his element: telling stories and jokes that everyone but me seemed to appreciate.

Dad was a natural performer. After rejecting his corporate upbringing — and a CEO father whose expectations he could never live up to — Dad spent his life pursuing artistic careers. His piercing blue eyes and theatrical style reminded me of a middle-aged Peter O’Toole (whose “Lawrence of Arabia” was filmed just hours from where we sat). Acting, with its fickle temperaments and many available indulgences, seemed ideally suited to my father, but after starring in a B movie as an early 20-something, he’d met my mother and chosen married life instead.

For almost 30 years my mother kept my father in check. They had a loving and stable relationship, and gave my brother and me happy childhoods. But there were signs that something wasn’t quite right. It wasn’t just the Playboys hidden inside the filing cabinet, or the way Dad seemed to treat parenting as a performance. Being young at heart was who my father was. Part of that meant he loved women, and was willing to sacrifice anything to be with them.

When divorce followed an infidelity, Dad moved into a house of his own. Women took the forefront of his life, and everything else — including me — got pushed to the side. I was a young man. I didn’t need parenting anymore, but I still needed some kind of fatherly presence. After dropping out of university, I’d moved away from small-town Ontario to write a book. When I came home for the holidays Dad would spend our visit talking about his various sexual escapades. We’d go out for dinner and he would invariably give the waitress a long and meaningful hug in the middle of the restaurant, stroking her hand and saying how much he missed her.

People thought of my father as either a liberated man or an immature bachelor. Dad was fully aware of the controversy, and played into it by perpetuating his own gossip. When one former girlfriend began dating another former girlfriend, he told people, “My ex is dating my ex.” He enjoyed thinking of himself as so sexually irresistible that he could convert a woman’s orientation — and so popular that people would care. “I keep hearing, ‘Jamie, you need to write a book about this. Your life is a gold mine.’”

In response to my father’s behavior, I’d swung the other way and basically become a monk. Everything in my life had to be organized and neat. It was like I thought being rigid would somehow make up for my father’s irresponsibility. I slept in a white room empty of all furnishings except for a bed. My T-shirts were organized by color — not that there were many to choose from. I dressed mainly in black and white, and if I liked the way an item fit I would buy a dozen pair, preferring to go with something that was dependable than something I didn’t know and couldn’t trust.

People said I was too serious for my own good: a workaholic who never took the time to enjoy life’s pleasures. The truth was actually a lot more serious. I’d started having anxiety attacks, and developed OCD-like tendencies that were affecting my quality of life. In preparation for our trip, I’d researched every hotel to the point of obsession, triple-checking our arrangements with the travel agency and printing off two complete dossiers of our itinerary.

I hoped that if I did these things, Dad would see our relationship was backward — that I was behaving like the responsible parent — and make it right again. But the morning after our four-way dinner, nothing had changed between us.

“I totally thought I was getting laid last night,” Dad said.

We were on a hiking path near the village of Dar Imlil.

“We smoked a doobie right there on the roof. Then I went back to their room.”

I pulled the map out of my backpack. I knew where we were but tricked myself into believing that I needed to check. Just to be sure.

“We looked at more photos on the bed. Then they said they were tired, and that was it. I came back to the room, but you were already asleep.”

“Those British accents, though …” My father drew air through his teeth. “They’re sexy, baby, yeah!”

I stared at my father, trying to repress my anger. Here we were, in an exotic country thousands of miles from home. Why couldn’t Dad stop thinking about women and take a second to appreciate the scenery? It was the trip of a lifetime, but my father seemed to regard it as a mere blip. Years later, he would still be able to recall the names of the women we met, but everything else — the name of our camel, our guide and the countless meals we shared together — would be forgotten, as if they paled in comparison.

“Is something the matter?”

“No,” I said, without emotion. “Everything’s fine.”

A few days later we reached the last stop on our itinerary and flew home to Canada.

In the weeks and months that followed, I thought about our trip and what it had meant for my relationship with my father. By serving as a model of discipline and self-control, I’d hoped to change his nature. But my father was never going to change. We could travel halfway across the world, and Dad would still be Dad: a 60-year-old man with a 16-year-old’s heart.

It was only after I started looking at photos from our trip, and remembering how I’d felt on the mountaintop that day, that I started to see another side to it. Yes, my father could be wild — but his recklessness had made me responsible. My personality had arisen in reaction to his. I was stubborn, hardworking and independent. Without having a strong male figure in my life, I’d learned to become one myself.

That’s when I felt a flood of emotion. Relief, joy, sadness and fear all rolled into one. Looking at a photo of us sitting on top of a moonlit sand dune brought tears to the back of my throat. My whole identity was based on my father. If I could accept him for who he was, I could finally accept myself. I’d built incredible expectations around my self-perception — I had to be perfect at all times — and now that was burning away like shadows in the morning sun, I was finally free. Free to have desires and vices live everyone else. Free to be imperfect.

In 2010, when Dad began dating a woman who was a whole 24 hours older than me, I was genuinely happy for him. Two years later I was able to give my father a copy of my very first book. He shook my hand, beamed at me and shook it again. Then he stood up in the middle of the restaurant to make an announcement.

Today I’ve accepted our relationship for what it is. My dad and I don’t always (or even often) share the same opinions. There are still things he does and says that drive me crazy. But beneath our differences of opinion is a loving acknowledgment that we really aren’t so different after all. Propriety or promiscuity, we’re both driven by passion, emotion and desire.

Years from now, when I have kids of my own, I’m sure the pendulum will swing the other way. My kids will think of me as I thought of my father, and the way Dad thought of Grandpa: as someone to rebel against, and prove wrong through example.

When they do I’ll remember my father, and the time we traveled to Morocco to see the beauty — all the beauty — this world has to offer.

Zander Sherman is the author of “The Curiosity of School: Education and the Dark Side of Enlightenment.” He is working on his second book, a memoir.