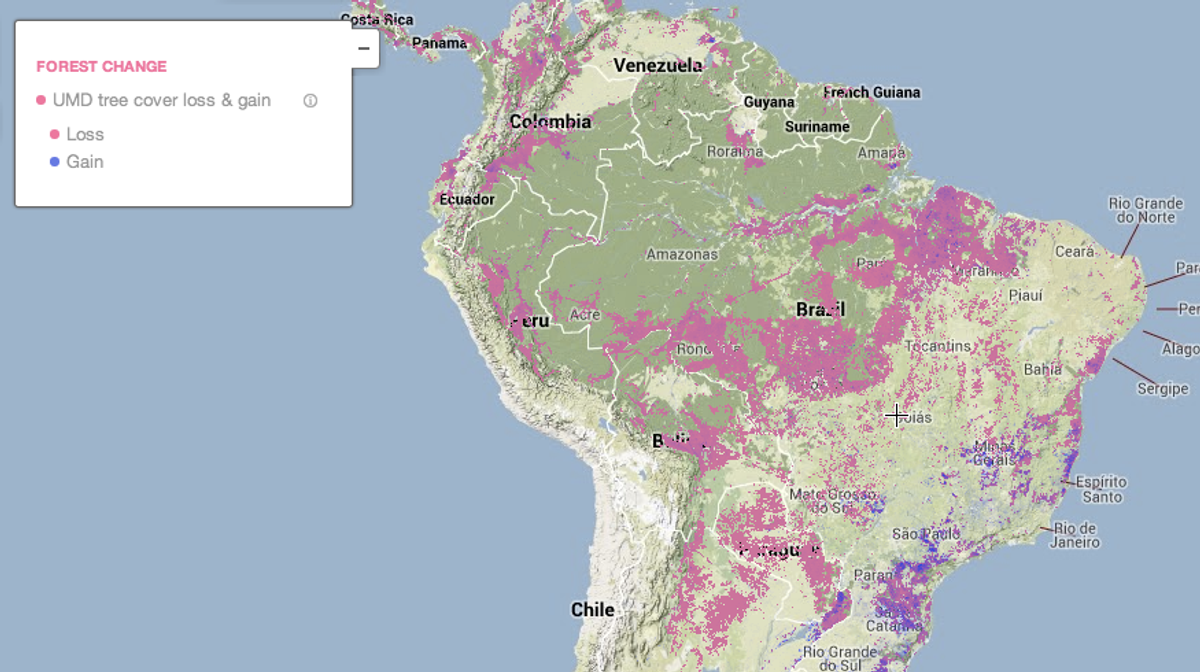 Between 200 and 2012, the world lost over 500 million acres of forest. Visualize it, if you'd like, as the disappearance of 50 soccer fields' worth of forest every minute, every day, for the past 13 years. Or, thanks to an ambitious new tracking tool developed by Google, you can see it happen for yourself.

Global Forest Watch, an interactive project involving the participation of Google, the World Resources Institute and 40 other organizations, is kind of like deforestation for the everyman -- it's easy enough for anyone to go on and get some idea of how forest loss is impacting both the entire world and, more likely than not, places closer to home. Using a combination of satellite technology, public data and crowdsourcing, it will update every month with the latest information, made freely available to anyone who's interested.

As Businessweek explains, it can also help multinational corporations keep their pledge to obtain raw materials without contributing to deforestation. After all, they can no longer claim not to be aware of what's going on in far-off corners of the world:

Companies like Nestle, Unilever and Cargill Inc. have pledged to stop using palm oil from trees planted on land that had previously been virgin rainforest. Last month, Singapore-based Wilmar International Ltd. (WIL), the world’s largest palm oil trader, said it will make sure plantations and suppliers protect forests and abstain from using fire to clear land. The company joined Unilever, which has said all of its supplies will be traceable to know sources by the end of 2014.

Sizer said the corporate pledges have influenced commodities trading. “It’s changed how these commodities are treated in the market. The commodity traders have to be able to say: ‘This is where it came from, this is how it was produced, these are the certification standards that it met.’”

“You can see in real time whether the supplier is doing what they promised,” Sizer said. “The good guys can demonstrate that they’re in compliance and the bad guys are clear for everyone to see. There’s nowhere they can hide.”

“It’s going to change certainly the way that we do business and that we interrogate our supply chains and our suppliers,” promised Nestle's head of stakeholder engagement in sustainability.

On its most basic level, though, the map makes clear the scope of the problem: of those 500 million acres cut down in the 21st century, a mere 197 million were regrown: