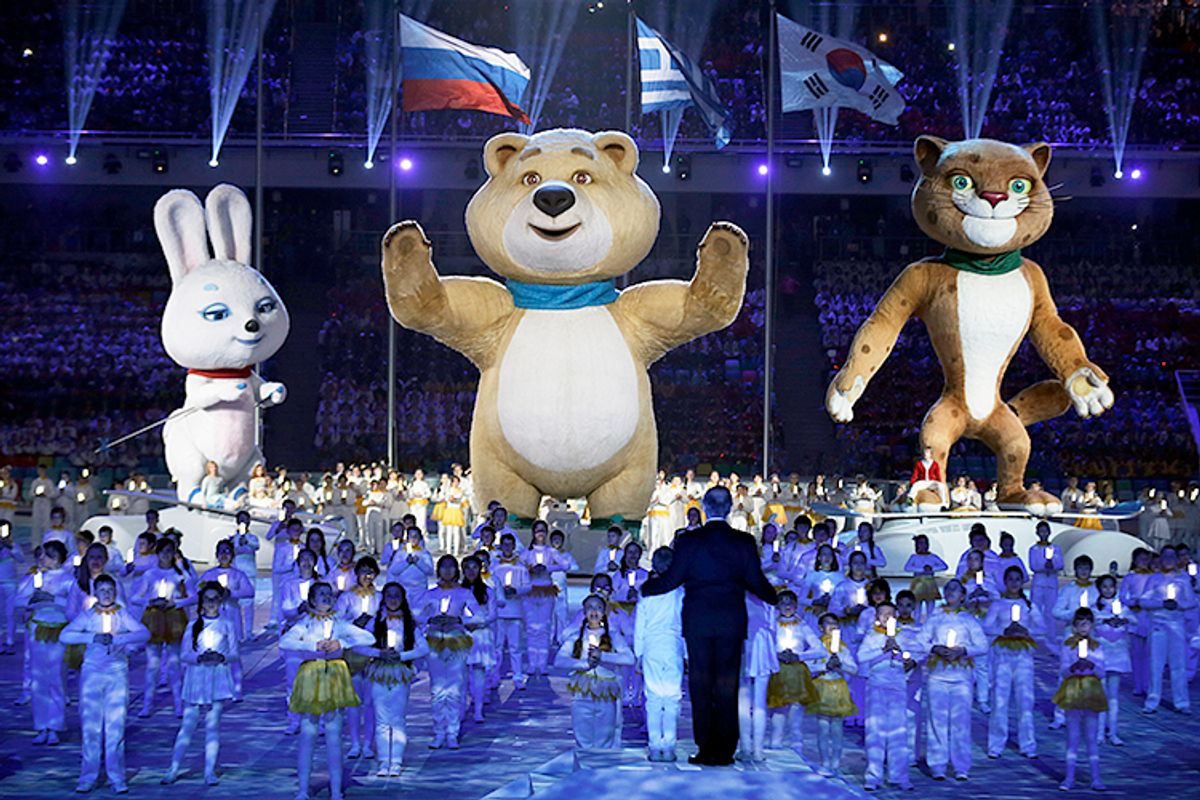 Large mascots and children perform during the closing ceremony of the 2014 Winter Olympics, Feb. 23, 2014. (AP/Charlie Riedel)
--

I spent the majority of the day yesterday mainlining Season 1 of “The Americans,” which returns with new episodes this Wednesday. The FX action thriller, set in the Cold War '80s, depicts the Soviet Union – mostly in flashback – as a land of grim prospects and harsh realities. The show’s heroes are Russian spies -- icy, mission-oriented operatives embedded in America who act in defense of their home country but resist the urge to defect only out of a sense of duty forcibly, even brutally instilled in them.

Certainly, these portrayals have some historical foundation. But let’s just say it was a welcome change to switch away from that dark fiction to NBC for the closing ceremonies of the Sochi Winter Olympics, an event designed to portray Mother Russia in a far more favorable light. The ceremony, titled “Reflections of Russia,” centered on that motherland’s cultural contributions to the world.

Like the opening ceremonies, this show was structured as a whimsical journey back through time. Thankfully, it was a much simpler affair, broken up into three segments illustrating Russia’s points of pride – art, ballet, literature – and bookended by those fantastic orchestrations of light and dance that Fisht Olympic Stadium’s unique design made possible. The upside-down, floating villa representing Chagall’s fancy and the paper tornado fostered by the fury of Russia’s greatest writers were particularly stunning.

There was also a slight, delightful detour to Pyeongchang, South Korea, where the 2018 Winter Olympics will be held. For their part, the South Koreans made grand use of Fisht’s impressive, illuminated floor and promised that there will, at the very least, be more music, dance and visual marvels to come four years hence.

The program ended with the snuffing of the Olympic flame by Misha, the giant animatronic bear that served as the mascot for this edition of the games. Misha is an almost frighteningly expressive upgrade of the mascot from the 1980 Summer Games in Moscow, which were famously boycotted by over 60 countries in an action spearheaded by the United States. Now, as then, a single tear appeared on Misha’s cheek to symbolize the sadness of the games’ end. Fortunately, unlike in that contentious era, the bear’s bittersweet sentiment was not so overshadowed by the threat of war between nuclear superpowers.