Hate your cable plan? Here’s how conservatives ruined the market

Comcast and Time-Warner are about to control the cable market with one company. How Scalia and others let it happen 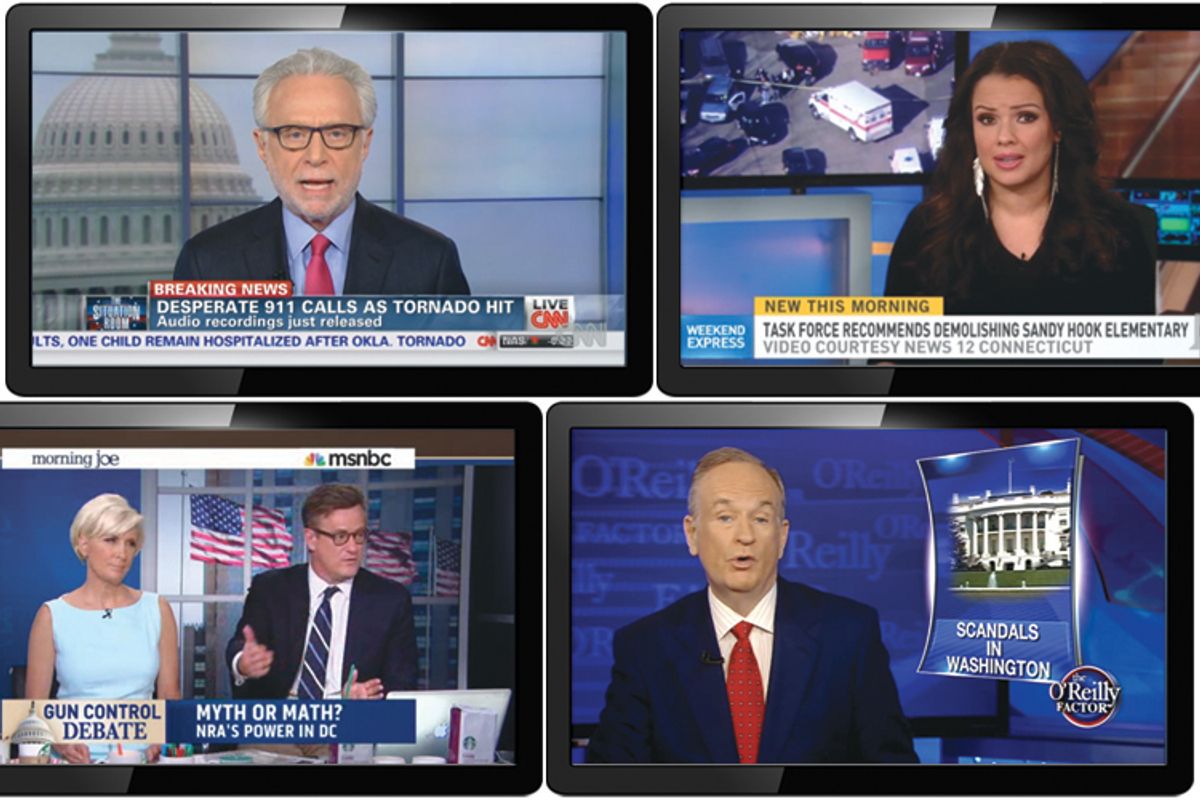 This is not that time. To most Americans, the story comes across as the New York Times reported it — as a story of financial elites squabbling over big numbers — and their eyes glaze over. Even this weekend’s news that Netflix has bowed to Comcast’s power, agreeing to pay it to ensure better service, isn’t likely to break the spell. That deal came little over a month after a federal appeals court threw out the FCC’s net neutrality regulations, which prohibited Internet service providers from giving preferential treatment to any type of Web traffic — another development that flew well under the radar of most consumers.

Corporate intrigue that would have caused an uproar a century ago, when most Americans regarded Wall Street as a nest of vipers and big businessmen as inherently untrustworthy, now simply confuses us. After years of being told that what is good for big business is good for the rest of us, the public now responds to financial news with a kind of resigned unhappiness, as if the deeds of economic elites were as mysterious and uncontrollable as the weather.

But while apathy is surely part of the reason that the antitrust movement — a powerful force in American politics for decades — has withered away, it is not the only reason. It is now virtually impossible for the government to break up monopolistic firms the way Theodore Roosevelt once did. Three decades ago, right-wing legal scholars led a campaign to transform the way we think about monopolies, and they succeeded so completely that they permanently derailed the antitrust movement.

Antitrust law was born of corporate abuse. In the 1880s, the first major wave of powerful corporate magnates in American history — known to posterity as the “robber barons” — were running roughshod over the economy, their attitude summed up in J.P. Morgan’s famous remark, “I owe the public nothing.” These magnates had discovered that they could make more money — and ward off competitors — by pooling their resources in artificial creations known as trusts, in which multiple businesses were controlled through a single holding corporation. Despite their paeans to “free enterprise,” these master capitalists dreaded the effects of competition on their profits. As Morgan put it, “I like a little competition, but I like a combination better.”

The response was perhaps the most successful anti-corporate grass-roots campaign in American history, the anti-monopoly movement. Organized by independent farmers and unionized laborers, the movement demanded that the federal government take action against the trusts. The movement’s first legislative triumph was the passage of the 1890 Sherman Antitrust Act, the foundation of all anti-monopoly law in the United States. The act outlawed “combination or conspiracy” to restrain trade or commerce, a sweeping definition that would permit the law to be used against all monopolies, not just the trusts. It was passed, in part, because lawmakers feared that a revolution was at their doorstep. “You must heed their appeal,” Sen. John Sherman told Congress, “or be ready for the socialist, the communist, the nihilist.”

But merely outlawing the trusts wasn’t enough. Not only was the government notably reluctant to actually prosecute any corporate trusts, but big business quickly found ways to turn the act to its own advantage. No sooner had the Sherman Act been passed than businesses began trying to use it against labor unions, on the grounds that they qualified as the “combinations” that the act outlawed. In the quarter-century before unions were explicitly exempted from antitrust prosecution in the 1914 Clayton Act, the Sherman Act was used most frequently to prevent workers from organizing or striking. The most famous cases — such as Roosevelt’s successful attack on Morgan’s railroad trust — were more the exception than the rule. But lawmakers had a very good motive to enforce the Sherman Act: trust-busting was overwhelmingly popular.

Antitrust laws were enforced haphazardly at best in the subsequent decades, but their underlying philosophy — that it was in the public interest to prevent the formation of business monopolies — did not change until the 1970s, when that philosophy was turned upside-down by the work of a single conservative scholar. That scholar was Robert Bork.

Long before Bork’s failed nomination to the Supreme Court—when he shocked the nation by insisting that there was no right to privacy in the Constitution — he had made his name as a legal thinker by challenging the conventions of antitrust thought. In his 1978 book "The Antitrust Paradox," Bork argued that most antitrust lawsuits were needless and destructive, and that the only defensible reason to bring one was to protect “consumer welfare.” Furthermore, Bork argued, the Sherman Act had been passed in order to uphold this goal of protecting “consumer welfare” by ensuring maximum “productive efficiency.” Like the “originalists” who claim to be able to read the minds of the Framers, Bork framed his drastic revision of antitrust history by insisting that he was rescuing the original meaning of a much-disputed text from the liberal do-gooders who had distorted it.

But what exactly did “consumer welfare” mean? According to Bork, it meant untrammeled consumerism: “Consumer welfare is greatest when society's economic resources are allocated so that consumers are able to satisfy their wants as fully as technological constraints permit. Consumer welfare, in this sense, is merely another term for the wealth of the nation.”

As history, Bork’s argument was certainly wrong. The farmers and workers who lobbied for the passage of an antitrust bill had not been motivated by the desire to “satisfy their wants” as consumers, let alone add to “the wealth of the nation.” They were not concerned that corporations were not “efficient” enough; they were concerned that corporate “efficiency” was ruining their country. As John B. Kirkwood and Robert H. Lande noted in their criticism of Bork’s work: “If all [Congress] had wanted to do was to encourage that form of industrial organization that was then the most productively efficient, they would have praised the trusts, not condemned them in the legislative debates and enacted a law that condemned many of their activities.”

The primary motive behind the antitrust movement, as the historian Richard Hofstadter observed, was “to keep concentrated private power from destroying democratic government.” By the 1880s, the biggest companies had far more employees and took in far more money than many of the state governments. If those companies were given free rein, they could collude to fix prices, combine to dominate entire markets, and work to overwhelm the political power of the citizenry. As one advocate of the Sherman Act put it, trusts “are a crime against the Government and against the people.”

Bork, by contrast, was not concerned about concentrated private power at all; he deplored only government power, in the service of what he called “a highly regulated welfare state.” As one reviewer of Bork’s book noted: “Paying a great deal of lip service to the free market system, he also advocates mergers, vertical integrations and other means by which market decisions are displaced by the [edicts] of large corporations.”

Bork’s argument was eagerly taken up by other business-friendly conservatives — including Richard Epstein, Milton Friedman and Antonin Scalia, who once said that he “never understood” antitrust law when he studied it in law school because it “didn’t make any sense” in the pre-Bork era. It also became a central tenet of the Chicago School of economics. The essence of the Chicago philosophy is that free markets cure their own ills and that businesses with harmful policies will simply fail. As one of Bork’s colleagues put it, “If a firm’s practices did not provide value to consumers, the firm would fail in the competitive battle.”

Does this actually happen in the real world? Recent history would suggest not; as Los Angeles Times columnist Richard Hiltzik recently noted, American cable giants provide notoriously shoddy service — because they don’t have to worry about any serious competition. The next time you squint at a distorted television screen during your favorite show or suffer through a choppy YouTube video, you’re seeing the fruits of one of America’s most stagnant, monopoly-dominated industries. Consumers overwhelmingly report being frustrated by the terrible customer service they get from their local cable provider, but there’s usually no alternative in their area. In the world left to us by Robert Bork and his followers, big businesses can stay afloat even if they don’t “provide value to consumers,” as long as they’ve already won the “competitive battle” by obliterating any plausible competitors.

The antitrust movement never recovered from the blow dealt to it by Bork. The Supreme Court adopted the “consumer welfare” standard for antitrust cases in the 1979 case Reiter v. Sonotone, making it much more difficult for the federal government to bring and win antitrust suits. Instead of simply demonstrating that a business has a dangerous lockhold on an industry, the government now has to prove that “consumer welfare” is being harmed. The last time the government tried to break up a major corporation was Microsoft in 1998, and the government lost that battle.

Conservative lawmakers quickly embraced the new standard. Encouraged by the Reagan administration’s lax enforcement of the antitrust laws, “merger mania” swept the country in the 1980s, and the business-friendly Clinton administration made no moves to halt the trend in the 1990s. In the eight years of his presidency, George W. Bush did not bring a single case against a monopolizing firm. Obama promised a tougher antitrust policy, but his record isn’t much better.

It is hard to imagine what the United States would look like today if the government had vigorously enforced the antitrust laws since 1890. An America without corporate giants would look nothing like the America we know today. The liberal journalist Walter Lippmann once grumbled that antitrust activists displayed all the economic sophistication of a “nation of villagers.” But one thing is certain: The end of antitrust as a viable policy has given us a country so dominated by corporate power that it makes the Gilded Age look like a haven of free enterprise. If we ever wish to challenge corporate control of our politics, our economy and our lives, our first step will be to rebel against the shadow of Robert Bork and to revive the antitrust movement.