How Matthew McConaughey found his way

The actor seemed adrift in middling romantic comedies, until he learned to repurpose his skills in interesting fare 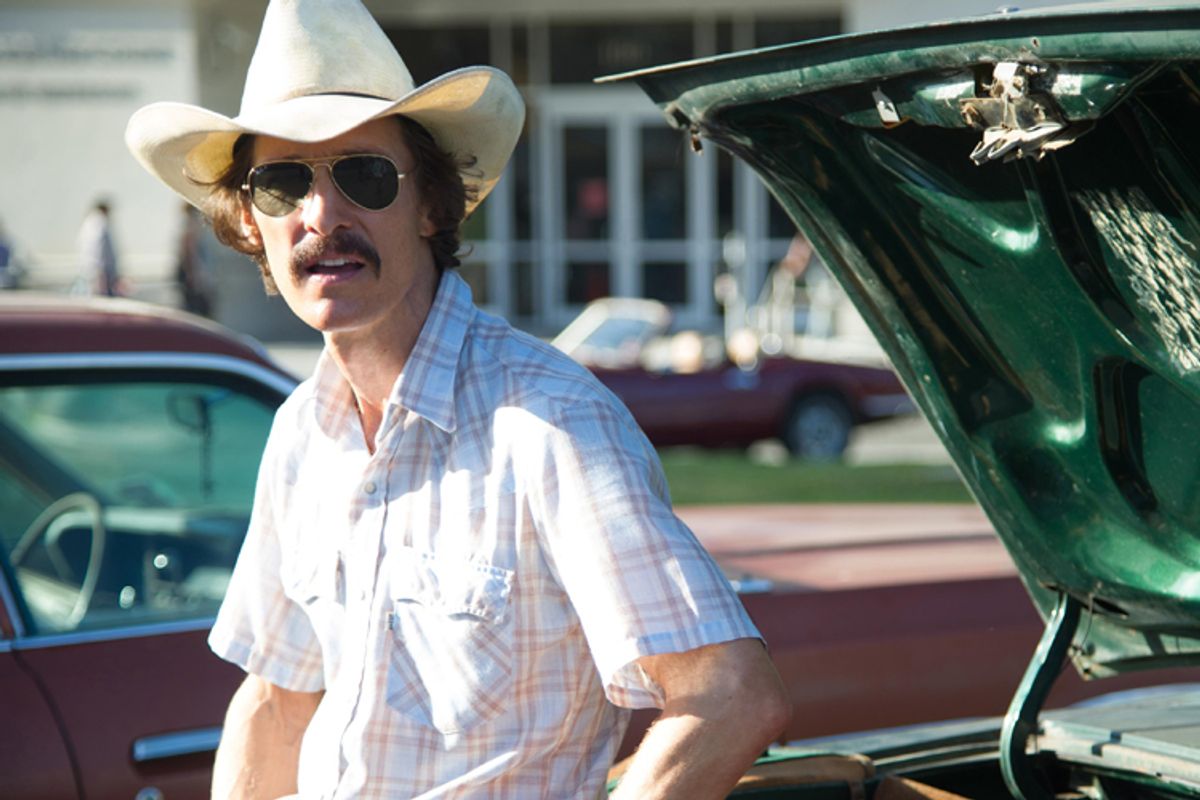 The so-called "McConaissance" has been a long time coming.

Matthew McConaughey, who rose to fame in the 1990s and has undergone a long wilderness period, has already won a Golden Globe and Screen Actors Guild Award this year for his performance in "Dallas Buyers Club." He is the front-runner for the best actor Oscar and he's concurrently starring in the HBO series "True Detective," for which he's received rave reviews. McConaughey could well be the first performer to win an Oscar while his series is airing since Helen Hunt, who was a TV star who happened to make time to star in a movie. McConaughey is a movie star so in-demand that he lends prestige to his HBO series.

It's hard to believe this is the same actor who seemed utterly adrift in the mid-2000s, starring in misbegotten projects like "Two for the Money" and "Surfer, Dude" and getting photographed shirtless practically every day on a seemingly endless beach vacation. McConaughey had been hailed by glossy magazines as a star to watch from the moment of his arrival on the scene in "A Time to Kill," but he didn't follow up that Grisham adaptation with risky work, repeatedly choosing easy roles as a romantic lead ("The Wedding Planner," "How to Lose a Guy in 10 Days," "Failure to Launch") or action hero ("Reign of Fire," "Sahara").

His skill set -- a desire to be liked that presented itself as a particular, and particularly Texan, bonhomie -- was perfectly suited for the times. He was a movie star with the aggressive masculinity and amiable dopiness of George W. Bush, and he capitalized on his appeal by appearing in whatever studio movie would take him. The romantic comedies, at least, did well, until they didn't; as recently as 2009, McConaughey appeared in future Trivial Pursuit answer "Ghosts of Girlfriends Past."

But since then, his résumé has been one any actor would envy, with roles in well-regarded little movies like "Mud" and "Bernie" and  better-than-they-should-be studio movies like "The Lincoln Lawyer" and "Magic Mike." That last movie, in which McConaughey played the charismatic but slimy owner of the central strip club, played precisely against McConaughey's type -- he was charming, but used that charm for his own manipulative ends, something that slowly dawned on the protagonist and the viewers. There was a quiet little campaign to get McConaughey a best supporting actor nomination at the Oscars, and he was ignored -- though he could well have won if he'd been nominated, given that none of the actual nominees campaigned at all.

That's not McConaughey's problem. In order to promote "Dallas Buyers Club," he's done plenty of press, and seems, consistently, like a hardworking fellow who cares about his work and his family life. His awards acceptance speeches have been idiosyncratic, but in a manner that speaks to the weirdness McConaughey wasn't able to express when he was simply the face next to Jennifer Lopez's on the movie poster. One is left feeling as though simultaneous success on the big and small screens couldn't have happened to a nicer fellow.

An Entertainment Weekly column recently asked whether Matthew McConaughey's recent executive decision to appear in better films would have been available to a woman; superstars like Meryl Streep and Sandra Bullock can write their own tickets, but McConaughey was a fading romantic lead when he turned things around. It's a question whose answer seems obvious, and an important one -- but for all that one may assume McConaughey was making lazy choices in his earlier, pre-"Lincoln Lawyer" career, he appears to have had few real options. As far back as 2006, McConaughey told Entertainment Weekly he was struggling to prove himself as a serious actor; he then didn't appear in any films for a year before returning with the Kate Hudson vehicle "Fool's Gold." Was it that he really wanted to re-team with Hudson after "How to Lose a Guy in 10 Days" had been such a hit, or that Hollywood hadn't figured out a way to use a character actor who could so convincingly do the schlocky movies a star would?

"Dallas Buyers Club" is, oddly enough, not a departure for McConaughey. He plays the same sort of fellow he has in the past -- a Texan who gets by on an ultra-masculine charm to which not all are susceptible. But he's introduced new shades -- this character isn't just assured, he's arrogant. The performance is wildly better than the movie, which assumes that the character of Ron Woodroof is, in the end, an uncomplicated hero; his flaws are, in the universe of a movie where Ron keeps winning people over and triumphing, just personality quirks. McConaughey makes him a person so certain in his rightness, even when he's wrong, that he's uncomfortable to be around.

McConaughey's next movie is to be "Interstellar," the Christopher Nolan film whose plot is, so far, under wraps. It's not too much to hope, given Nolan's history, that this will be more than just a standard-issue big-screen hero role for McConaughey, that the actor will be able to stretch a bit, to finally get a big-budget role in which he's able to do more than seduce, even if that's what he's always been good at.