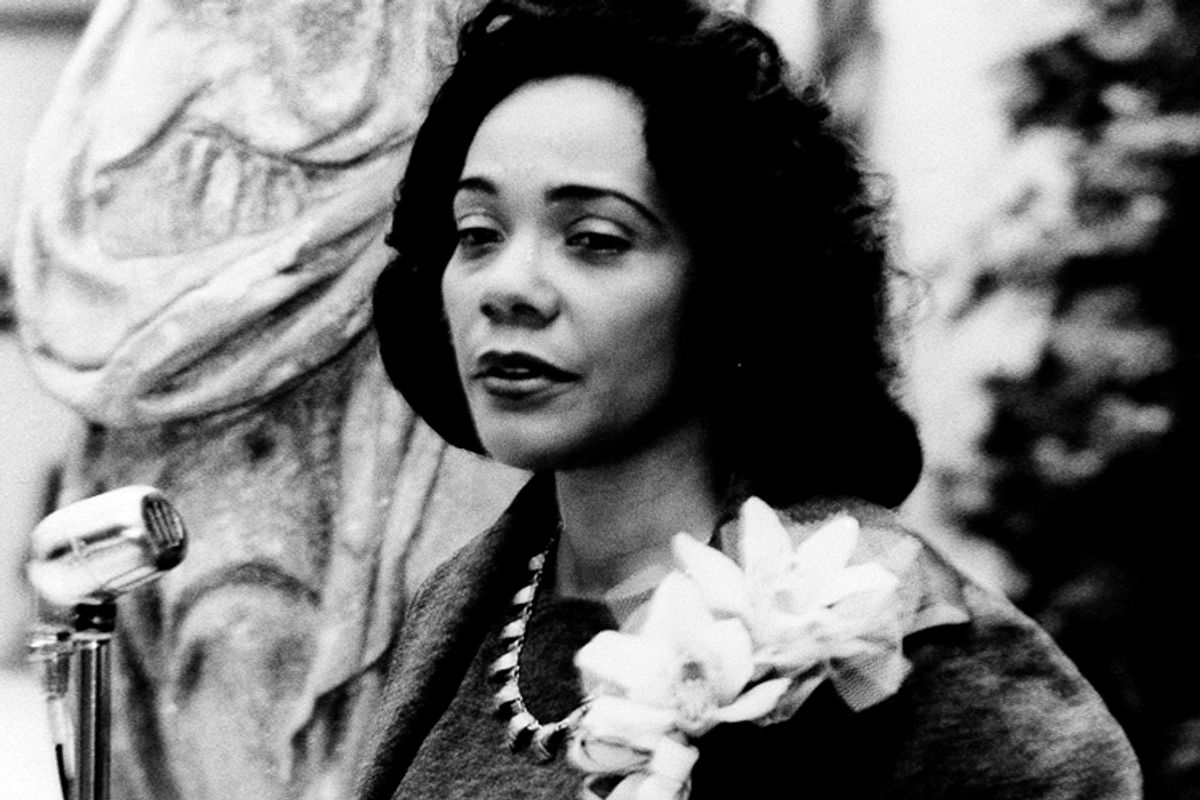 Black History Month is a time for celebration of heritage. It’s 28 days that our ancestors’ stories and struggles are shared in schools, media and communities. But, as with most things these days, it's been appropriated, mangled and spoon-fed to us without the rich flavor and spice. Bland.

Over the past few decades, we have seen conservatives distort our legacies of struggle, erase the disproportionate impact of their policies, and co-opt our victories – remember Glenn Beck’s attempt to reclaim the civil rights movement from those who have “distorted” it? More recently and preposterously, the Christian right and some groups on the left have been whitewashing black history in the movement for women’s autonomy – even using it and our children against us without our full consent. They've rewritten history to the point that many believe our ancestors were fervently antiabortion, and still would be today. We've allowed them to change the legacy of our leaders, and it's time we take it back. It's time we tell our own stories.

Abortion for black women has always been a revolutionary rejection of patriarchy, white supremacy and forced systems of oppression. The great scholars Patricia Hill Collins and Angela Davis have explained that throughout slavery and into the 20th century, self-abortion through herbal remedies, hangers, hatpins and pencils were a way out of slavery and poverty. Our ancestors fought hard to refuse to carry the children of their master rapists and rear another generation of slaves, even when it meant that “barren” women were deemed worthless chattel and sold between plantations. From generation to generation, stories and recipes were passed down to ensure that women weren’t forced to carry pregnancies they never desired or weren't able to carry healthily. For as many powerful women that raised children in the worst conditions imaginable, so there were those who refused.

Antiabortion activists think themselves clever when they compare abortion to slavery, but reams of historical records prove their narrative to be rooted in quicksand. They have ignored the stories of men and women being raped, beaten, starved and worked literally to death and the reverberating effects of that most inhumane of institutions. It is indeed preposterous to assert that a free black woman deciding her own fate as her ancestors have done for centuries (including within the context of slavery) is a perpetrator of the crimes from which she continues to suffer.

Black women have been a part of the workforce since our arrival on these shores. But as our elders joined the ranks of laborers during World War I, they found a great need for access to birth control and abortion. In "When Abortion Was a Crime," historian Leslie J. Reagan writes that hospitals and the medical establishment, already mainly white-serving, sought to disenfranchise midwives and keep them from providing abortions while community doctors set up clinics to help families access then-illegal abortion care. In Detroit, Dr. Edgar Bass Keemer Jr. provided abortions from 1938 through the 1950s, ensuring that black women had access to safe abortion care regardless of their income. Whether contraception or abortion, men and women in the black community have always banded together to provide for the needs of our own.

During the civil rights movement, economic justice and equality were central to organizing – and Martin Luther King Jr. knew that family planning was key to achieving them. Many activists today say that King would be “pro-life,” but we have stories and his own words to the contrary. In 1966, Planned Parenthood honored him for his work in opening access to family planning methods; his wife, Coretta Scott King, accepted the award on his behalf. King explained that because black workers were often relegated to low-wage jobs, limiting family size was important to economic success. “For the Negro,” he said, “intelligent guides of family planning are a profoundly important ingredient in his quest for security and a decent life.” The day she accepted the award, Coretta Scott King said she was “proud to be a woman.”

As black feminists from the '70s onward sought to expand racial, gender and economic equality for women of color, they found themselves being left out of mainstream conversations about equal pay and reproductive rights. Their stories were left untold in a women’s rights movement, led by mainly white women. Tired of being silenced and fueled by an international movement for human rights, they began the reproductive justice movement to bring to light the fact that communities of color lack access to basic healthcare and pregnancy options, including the opportunity to raise our children with dignity. They demanded that our stories be heard, and their demands still affect how we think about policy today.

Despite centuries with a boot on our necks, black women embody a legacy of boldness that has been crucial in social change throughout history. Whether undermining slavery’s use of our bodies or speaking unabashedly about the threats to our bodily autonomy today, black women have long been leaders in the struggle for our bodies, our children and our lives. Yet whether the focus is on effort or impact we are often left out of today’s story. Despite the fact that black women consistently deliver pro-choice Democratic politicians (most recently New York Mayor Bill de Blasio and Virginia Gov. Terry McAuliffe) while white women often split their votes with anti-choice Republican candidates, the post-election framing shows that “women” made the difference in the election, erasing our hard work and voices. Pundits like to cite that the wage gap for women is 77 cents to a man’s dollar, but forget to note that it’s 64 cents for black women and 55 cents for Latinas. Ignoring this income gap while the government is simultaneously cutting food assistance and access to family planning methods erases actions that hurt women of color most.

We need the audacity of our ancestors now. We have too much knowledge and too many resources to continue to have the narrative reshaped and our realities ignored before our eyes. The black community has historically supported bodily autonomy and access to safe and legal abortion. Our history proves that we have led the way in the abortion and reproductive justice movement, and we are influential in policy now. It's high time we ensure that our influence is accurately reflected and that we celebrate it. This Black History Month, while right-wing pundits will undoubtedly try to co-opt our legacy in service of their agenda, I plan to read up on my history and share those stories from the rooftops. I refuse to allow my ancestors to be silenced and erased, or my own reality and contributions to be ignored, because as Zora Neale Hurston told us, “If you are silent about your pain, they’ll kill you and say you enjoyed it.”

Renee Bracey Sherman is a writer and activist committed to the representation of people who’ve had abortions at the intersection of race and class. She is a member of Echoing Ida, a Black women’s writing collective, and her writing has been featured in The New York Times and The Guardian.