How movie theaters get away with selling you garbage food

The snacks are not only exorbitantly priced, they're also making us fat: A medium Regal popcorn has 1,200 calories 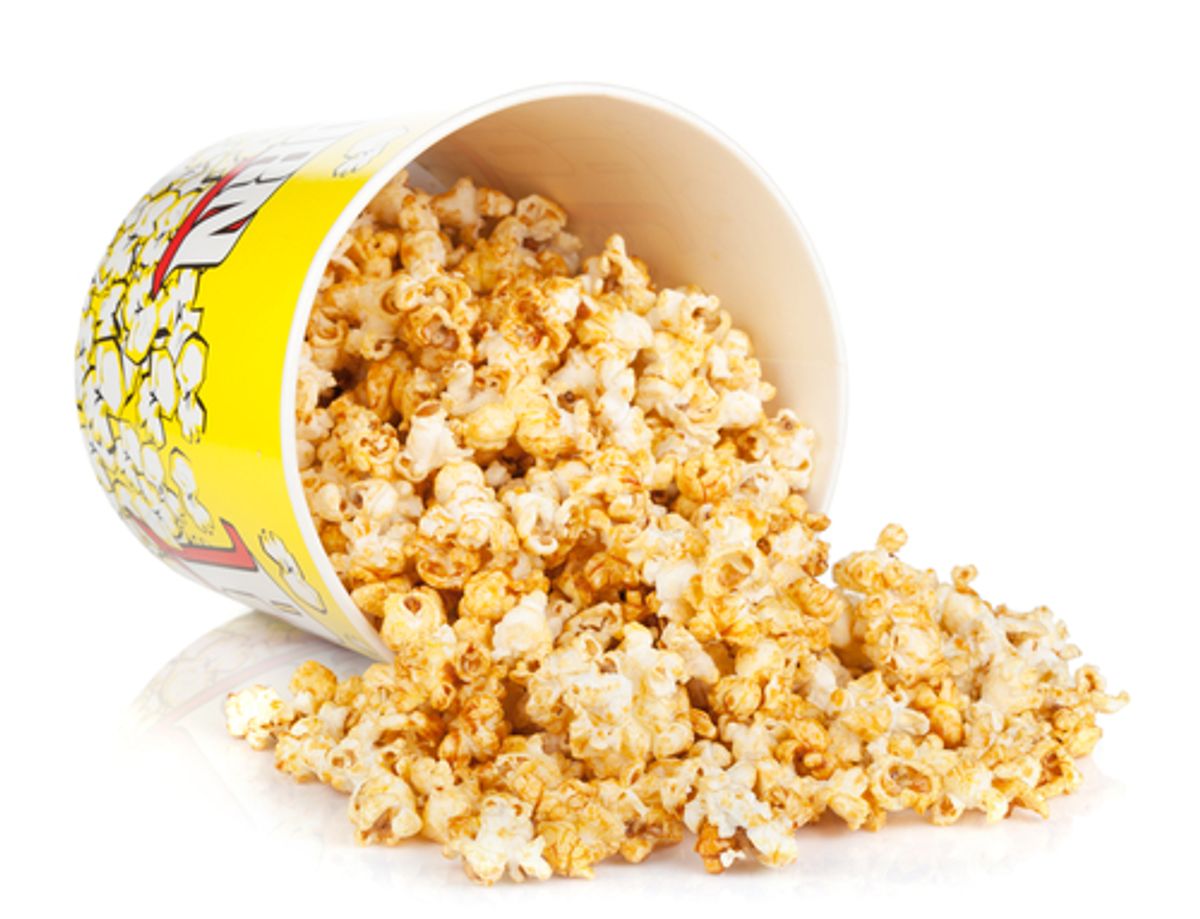 America has a love/hate relationship with movie theater snacks. We share a universal opinion that the offerings are too expensive and unhealthy. But while theater policies forbid moviegoers from bringing their own food, we seem happy enough to be a captive audience and line up for the nostalgic charms of greasy popcorn, Dots and watery soda.

Snacks are a cash cow for theaters, providing some 85 percent in net profits. But no one really goes after the food Americans eat in movie theaters, which is mostly bits of corn syrup, food starch, malic acid, and artificial colors, encapsulated in a sugary ether. Such snacks seem like an integral part of going to the movies, a trip that usually falls somewhere between an absolute good and a mindless indulgence. Pauline Kael once described this simultaneously trashy and transcendent experience as, “eating a candy bar and cleaning an ‘allegorical problem of human faith’ out of your teeth.”

But before you plunk down $7 for a medium-sized bag of popcorn at the movie theater, consider its cost to your health. A 2009 study conducted by the Center for Science in the Public Interest analyzed samples from the country's three largest movie theater chains — Regal Entertainment, AMC Theatre Groups, and Cinemark. It turns out that there are 1,200 calories in just one medium-sized bag of Regal’s popcorn. Even a small popcorn from Regal contains the same number of calories as Personal Pan Pepperoni Pizza from Pizza Hut — and three times the saturated fat.

Jayne Hurley, a senior nutritionist at CSPI, is quoted in the report as saying, "Regal and AMC are our nominees for Best Supporting Actor in the Obesity Epidemic.”

This popcorn problem probably has something to do with the fact that people eat more movie theater food when it is served in larger packaging. Scientists have found that this phenomenon is particularly true even when the customer does not like the taste of the food he or she is eating. It’s precisely this logic that movie theaters profit off of, and which former mayor Michael Bloomberg attempted to counteract with his plan to ban soft drinks of 16 ounces or more in New York City.

One organization that spoke out against Bloomberg’s soda ban was the National Association of Concessionaires, an industry trade association whose members include racetracks, universities, convention centers, and of course, movie theaters. The country’s biggest theater chains are members and so are corporations that keep their concessions well-stocked, such as Coca Cola, PepsiCo, Hershey, Nestle, and Weaver.

Dan Borschke, executive vice-president of NAC, says that “the vast number of movie theaters are now corporate-owned in very large capacities. There are still mom-and-pop operations, but they’re fewer and far between.”

Borschke also spoke of the new trend in movie theater cuisine, the Cinébistro. Cobb Theaters, a chain operating out of Birmingham, Ala., with locations across the southeast, cooked up the franchise, but many more circuits have followed suit, including AMC’s Dine-In Theatres and Cinemark’s Bistros.

“What’s amazing is they literally have a full-fledged kitchen,” Borschke said. “In many ways it’s a restaurant with an entertainment charge.” When asked if these restaurants have healthy options, Boschke said there were some, but admitted that the restaurants are still relatively rare and most moviegoers aren’t looking to spend that kind of money on food anyway. What they do offer is a very particular service to a very slim sliver of movie theater clientèle.

“Theaters are looking to fill many different niches,” Borschke said.

So why is it that movie theaters continue to sell unhealthy food? Very simply, because we're creatures of habit, and we continue to associate artery-clogging snacks with the moviegoing experience, much in the same way that we expect cake and ice cream at birthday parties. "Theaters will only sell you what sells," Borschke observed.

Our demand for cheaply produced food is a money-maker for theaters. According to Regal’s recent fourth-quarter report, the multiplex raked in about 26 percent of its total revenue from concessions. This may not seem all that high, but consider that Regal spent $265 million in operating expenses for film rentals and advertising costs, but only $25 million on concessions, and those profit margins start looking puffier than a fistful of popcorn. The numbers for Cinemax and AMC’s most recent earnings look similar.

And NAC wants to keep it that way. The organization keeps tabs on legislative and regulatory issues that can impact the bottom lines of its members through its Government Relations Committee, which includes executives from three top movie chains and one from a major stadium concessionaire. Boschke also sits on the committee.

Movie theaters are also exempt from the 2011 FDA rule requiring chain restaurants with over 20 locations to post calorie counts on their food and drink menus (the ruling does not apply to alcoholic beverages). Margo G. Wooten, the director of nutrition policy at CSPI, told the New York Times at the time of the decision that exempting movie theaters from the ruling was a mistake. “It doesn’t matter whether you happen to be watching a movie while you’re eating,” she said. “Those calories still count.”

Some argue that theme parks and sporting events sell food that is just as unhealthful, but movie theaters are by far the bigger offenders to public health. Nearly three times as many people in the U.S. and Canada go to the movies than to theme parks and sports games combined, according to the Motion Picture Association of America. The same study found that most moviegoers are “frequent," meaning they go more than once a month, and that in 2012 the number of frequent visitors rose in every single age demographic.

In the end, the price the nation pays for unhealthy movie theater food is just a drop in the bucket compared to what fast food corporations have wrought on Americans’ physical well-being. But even McDonalds offers apple slices and salads. Why should movie theater corporations and the stratospherically wealthy vendors they partner with choose to withhold healthier options? And why shouldn’t they have to comply with the few food and beverage regulations that lightly constrain fast-food chains? A simple calorie count would help customers make a more informed decision about what they do and don’t eat.

If the government won’t regulate, and the theaters won’t branch out, customers can use their purchasing power to manage the junk food mania. “On the concession side the number-one seller is always popcorn and soft drinks; they have been for decades,” said Borschke.

It’s completely within our power to change this. Until we do, Americans will continue purchasing four ounces of Junior Mints and cardboard packaging for totally absurd prices just because they will be eaten in a dark room full of enthralled strangers.