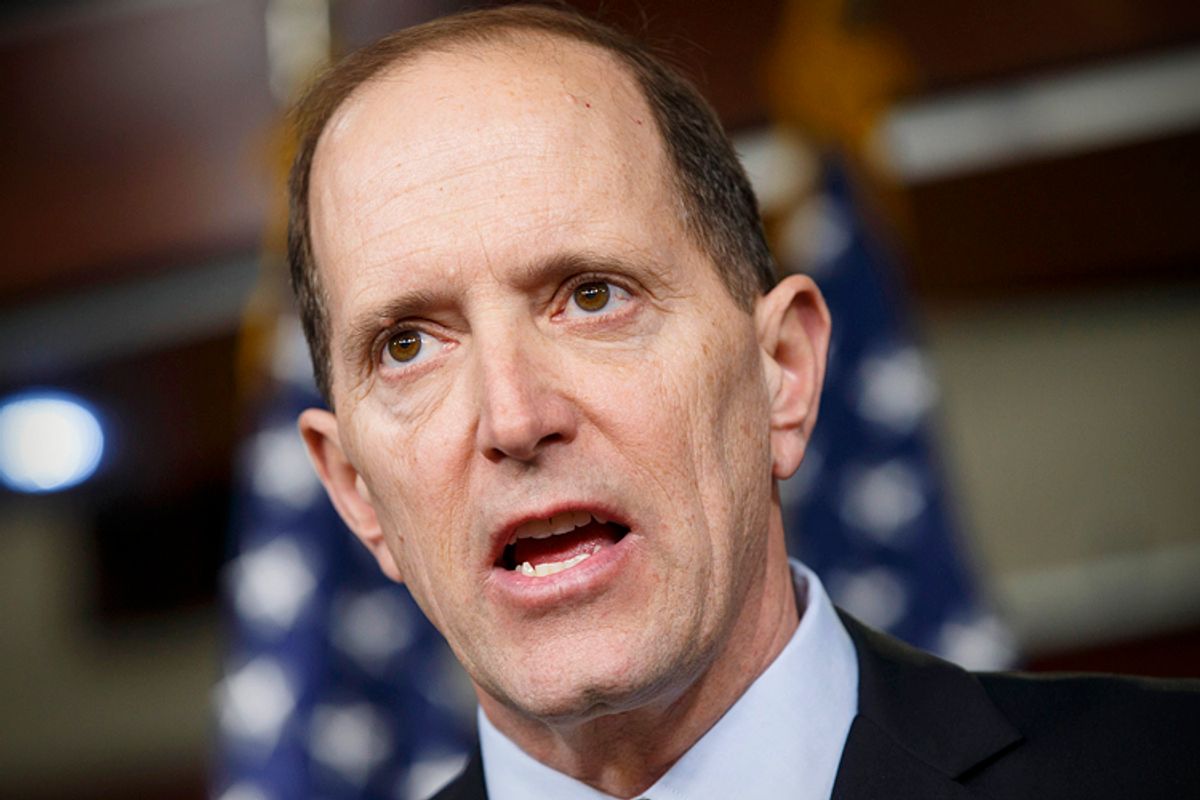 Republican Rep. Dave Camp annoyed many of his fellow Republicans by releasing -- apparently without permission from leadership -- an ambitious tax reform proposal. He surprised many, including me, by crafting a tax reform proposal that isn't completely terrible. Yes, it contains a tax cut, and effectively cuts tax rates on dividends and carried interest -- two huge sources of income for the very rich -- but it also taxes large financial institutions, adds a surcharge for very high-income households, and closes some loopholes that primarily benefit wealthy taxpayers.

Obviously, the plan isn't exactly ideal. "Simplifying" the tax code is a priority mainly for people who make enough money to want to avoid paying taxes, and who make their money by means unorthodox enough to make avoiding taxes possible and desirable. Making fewer brackets basically means making the tax code more regressive (and Camp avoids this only through that surcharge on the rich, which is an effective third bracket that just isn't called a bracket). The apparent requirement that all major tax reform proposals be "revenue neutral" is a bizarre one. But for a Republican plan it is something Democrats would be thrilled to use as a starting point for negotiations, and maybe even something they could live with if passed as is. So, obviously, it is already dead. Senate Minority Leader Mitch McConnell killed it before it was even released. Because it was a perfect example of something that "everyone" wants that important people actually don't want at all.

"Comprehensive tax reform" is one of those political buzz phrases that has an actual meaning, but that is generally used by pundits to symbolize "a good thing we can't have because of bad partisanship." It means reforming the federal tax code to "eliminate loopholes" and lower rates. Lowering rates is considered a self-evidently noble goal mostly because of the total ideological victory of the conservative movement's campaign to frame all taxation as a terrible burden/unjustifiable theft, but the "eliminating loopholes" bit is actually about as close to "good idea that both parties theoretically agree on" as they come. Loopholes are deductions and credits -- ways the government subsidizes certain things without directly spending budgeted money, because, again, the primacy of anti-spending rhetoric just encouraged Congress to make government spending more opaque. Ideally, reform would involve altering the tax code so that it doesn't do things like subsidize home-buying for wealthy people, or corporate jets, or donations to "charities" that are often very wealthy universities or political organizations.

So everyone agrees that these loopholes are bad and should go away, Democrats because these loopholes are essentially ways in which the government gives money to rich people, and conservatives because these loopholes "distort the market" and make our tax code too complex. There's one problem, though: "Loopholes" is basically code for "tax expenditures that benefit rich people and corporations." Tax expenditures for middle- and working-class Americans -- like the earned income tax credit -- aren't thought of as loopholes, they're just thought of as benefits. So "eliminating loopholes," even when paired with "lowering rates," means taking things way from rich people. And one thing our government is really, really bad at is ever doing anything that inconveniences the wealthy.

When "comprehensive tax reform" fails, again and again and again, to actually happen, the lazy pundit usually falls back on blaming partisanship, or Congress and the president lacking "courage" or "bravery." In this case, though, the proposal failed well before it could even become an object of partisan bickering, when a Republican declared his party member's proposal dead on arrival. This happened for a very simple reason: Lots of important donors will not like this plan, and Congress responds to the desires of the rich.

Tax reform that does what pundits claim they want it to do -- make the tax system less opaque, fairer and less advantageous to wealthy people exploiting loopholes -- cannot possibly go anywhere in this political environment, because the sort of "tax reform" that wealthy people actually want is just tax cuts. The reform they want would "simplify" the tax code by lowering their income tax rates, and lowering corporate rates, and eliminating the estate tax and not taxing capital gains at all. It would be a very simple code indeed, in which millionaires and billionaires would just not have to pay very much or spend much time hiding money overseas. Good on Dave Camp for following through on the supposed promise of bipartisan tax reform, but all he really did is expose it as another comfortable Beltway fantasy.