The "Dead Poets Society" takeover of America: How memes ate our politics 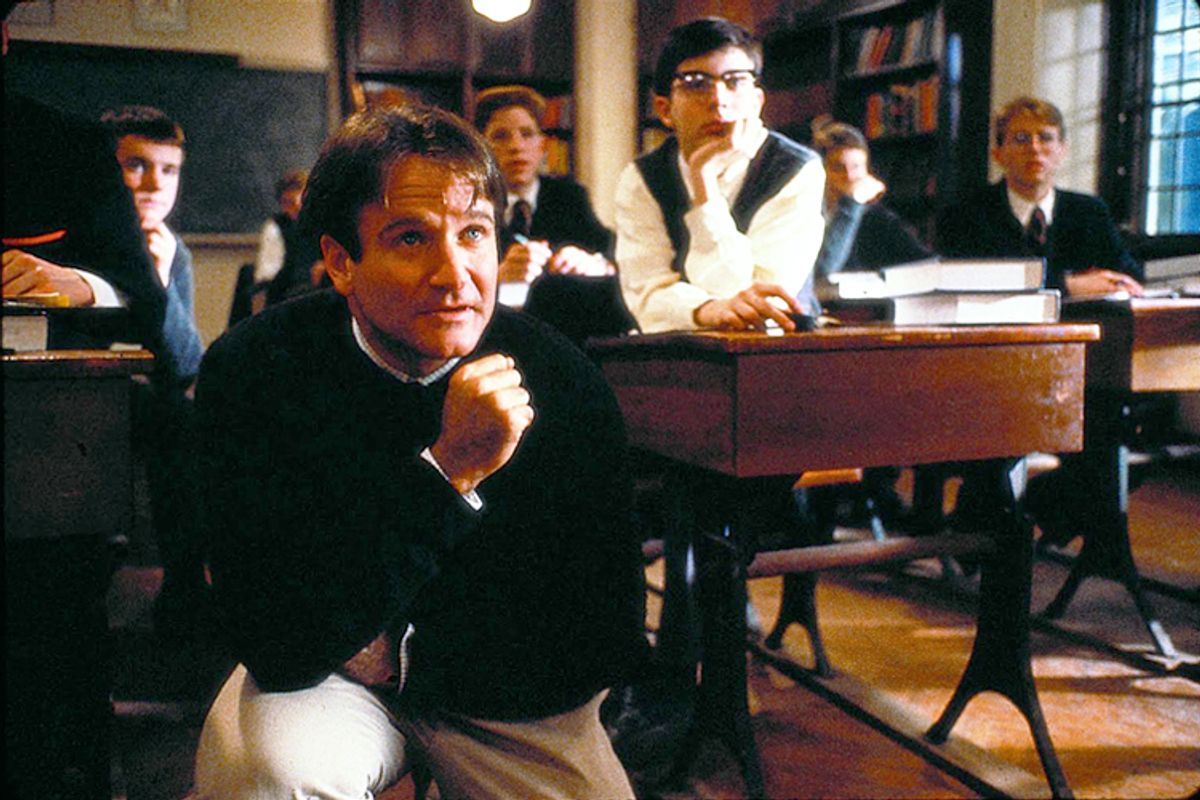 If there's one memorable scene in "Dead Poets Society," it's the last one. Robin Williams as the disgraced English professor/guru Mr. Keating stands with mournful pride in the door of his classroom while his loyal students, one by one, climb atop their desks, defying social convention and the ineffectual whining of their headmaster (Norman Lloyd) in order to bear him tribute. "O Captain, My Captain!" declares Todd Anderson (a ludicrously young Ethan Hawke), the stomp of his feet on the desk emphasized by the soundtrack, his ascent turned into a vertiginous rush by the circling camera.

Then, one by one, other classmates rise; the awkward Mr. Pitts, the lovestruck Knox Overstreet (Josh Charles), the scene dragging on and on impossibly as we contemplate each of their young, sad, grateful faces, turned, like ours, toward Robin Williams. Their tribute to Keating, the star teacher, is also our tribute to Williams, the comedian making his transition to serious acting; their gratitude to him for inspiration is our gratitude to him for that same inspiration. Onscreen and offscreen are fused in joyful, righteous contemplation of the great man. He has taught us all, students and audience, to join together as one in the worship of nonconformity.

In celebration of "Dead Poets Society's" 25th anniversary, Kevin J.H. Dettmar of Pomona College recently performed a pleasantly vicious evisceration of the film. Dettmar points out, accurately, that Keating, the supposedly genius teacher, is a crappy reader, utterly unaware of the irony in Frost's "I took the road less travelled by," turning the nuanced, knowing contradictions of Whitman and the Romantics into chautauqua orations and encomiums of bland uplift. Rather than teaching the students to think for themselves, Keating teaches them to think like him. Or, as Dettmar says, "while the boys are marching to the beat of a different drum, it’s Keating’s drum." In one classroom exercise, Keating stands on his desk, and then urges each of the young men to climb up as well so that they can see the world differently — from Keating's perspective. Like the cheerleaders for anarchy in the Nirvana video, the film bottles the smell of teen spirit and then passes it out in careful, identical doses, as crassly uniform as the desk set Anderson receives on his birthday from his parents year after year, a special, personal gift that is always exactly the same. It's contagious, here we are now, entertain us, as the poet said.

So, "Why does all of this matter?" as Dettmar asks. Why spend time skewering a 25-year-old movie, enjoyable as that skewering may be? Dettmar's answer is somewhat disappointing. He argues that "Dead Poets Society" is important because it shows a lack of respect for the humanities. Keating presents an amateurish vision of English studies, long on enthusiasm and short on analysis. That, Dettmar concludes, is unfair to real English professors, who should be respected for their analytical keenness rather than for their inspirational awesomeness. I do understand Dettmar's frustration; no one likes to see themselves glibly Disneyfied on film. Still, only a humanities professor could watch "Dead Poets Society" and come away with the conclusion that the film's problem is insufficient reverence for humanities professors.

In fact, the problem with "Dead Poets Society" is broader than its misrepresentation of the professional status of disgruntled English scholars. Rather, the film is a perfect example of what Walter Benjamin called the "aestheticization of political life." Brannon Costello, an English professor himself, explains in a recent essay:

[The aestheticization of political art] considers the implications of fascism's mobilization of mass culture as part of its subsumption of the political to the aesthetic, its attempt to offer people solutions to real political problems by displacing those problems—and those people—into the realm of art.

Economic problems, tensions between competing groups, discussions of political power, are all addressed not through political action, but through meme and symbol —  the Nazi salute, the swastika, the inspirational film.

Again, Benjamin originally developed this concept as an explanation of fascism. But as Costello argues (and as I discuss here) it also, and often, seems applicable to political modernity more generally — whether the modern governments in question are fascist, communist or liberal democratic. Certainly, "Dead Poets Society" itself seems like an engine to subsume issues of democratic government and liberal individualism into aesthetics.

This is most obvious when Charlie Dalton (Gale Hanson) begins to advocate for the inclusion of girls at the private Welton Academy. Circa 1959, when the movie is set, educational opportunities for women were a serious social justice issue. But that issue is never presented in the film on its merits; indeed, Dalton's enthusiasm for it appears to have more to do with his libido than his sense of fairness. Votes for women is not about women or power or equality. Instead, it is about Dalton's response to the charismatic Keating's message of "carpe diem."

The height of Dalton's activism occurs when he pretends to receive a call from God at a school meeting, informing him of the Deity's preference for women at Welton. Politics is a spectacle and a comedy routine -- an aesthetic performance. It's an occasion for Dalton to demonstrate his nonconformity and (when he is viciously paddled) his fortitude in the face of punishment. Having served as the occasion for this inspirational, moving parable, the issue of women students at the school is quietly abandoned.

The implicit sexism here is heartily endorsed by the rest of the film as well — and that endorsement consists of turning gender politics insistently into aesthetics, and vice versa. Keating tells the boys jokingly-not-jokingly that the purpose of language is to "woo women," and the film in general treats its (always minor) female characters as an occasion for the verbal and visual pageantry of male virtuosity and self-assertion. Charles pretends he's written poems by folks like Byron in order to wow some girls, because, apparently, girls are just that dumb.

Even more disturbingly, Knox, filled up with beer and talk about sucking the marrow out of life seizes the day by caressing his crush object Chris (Alexandra Powers) while she is passed out drunk. This is not presented as a moral, ethical or political issue involving Chris' consent. Instead, it's part of Knox's romantic progress and progress as a Romantic. The relationship between white privileged boys and their aesthetics is more important than, and subsumes, the ways those boys treat women. Similarly, when Charles draws a (supposedly) Native American potency symbol on his chest and begins to call himself "Nuanda," the exoticism stands in for any actual discussion of race or colonialism, or of the fact that Keating's Romantic curriculum excludes, not just the realists, but all non-white males, not to mention any discussion of Whitman's homosexuality. Political differences and exclusions are transformed into the aesthetic accouterment of a feel-good pageant.

In his essay, Dettmar argues that "Dead Poets Society" does not take humanities seriously enough as a discipline. He characterizes this position as connected to a broader cultural disdain for the critical study of culture and aesthetics, epitomized by (for example) President Obama's recent good-humored dig at art history majors. The truth, though, is that, in its own way, "Dead Poets Society," and the broader culture, take the study of aesthetics, and their manipulation, very seriously indeed. That's because politics, in "Dead Poets Society," and in America today, is constantly slipping into aesthetics. The "axis of evil," welfare queens, birth certificates, "yes we can" — the realm of politics is the realm of the meme. It's not an accident that Keating encourages his students to call him "O Captain, My Captain" — the phrase Whitman, at his most sloganeering, used to refer to Abraham Lincoln. Idolatry, loyalty, pageantry in the name of individualism and freedom — that's not just the basis of Keating's class. It's the basis for our political life as well.

Humanities and aesthetics are not marginal discourses in our society.  On the contrary, they're central to how we relate to politics and to power. We live in a time when mass politics involves the continuous manipulation of aesthetics. That's why amateurish embrace of aesthetics, which Dettmar warns about, is dangerous —it leaves you at the mercy of whatever enthusiasm, or whatever dear leader, climbs up onto the desk. Inspiration without analysis is a recipe for gullibility, for cruelty and for an unthinking reaffirmation of prejudice as the self-actualization of the powerful. We need to understand the discipline of the humanities because, if we don't, the humanities will continue to discipline us.