Why Leonardo DiCaprio doesn't have an Oscar 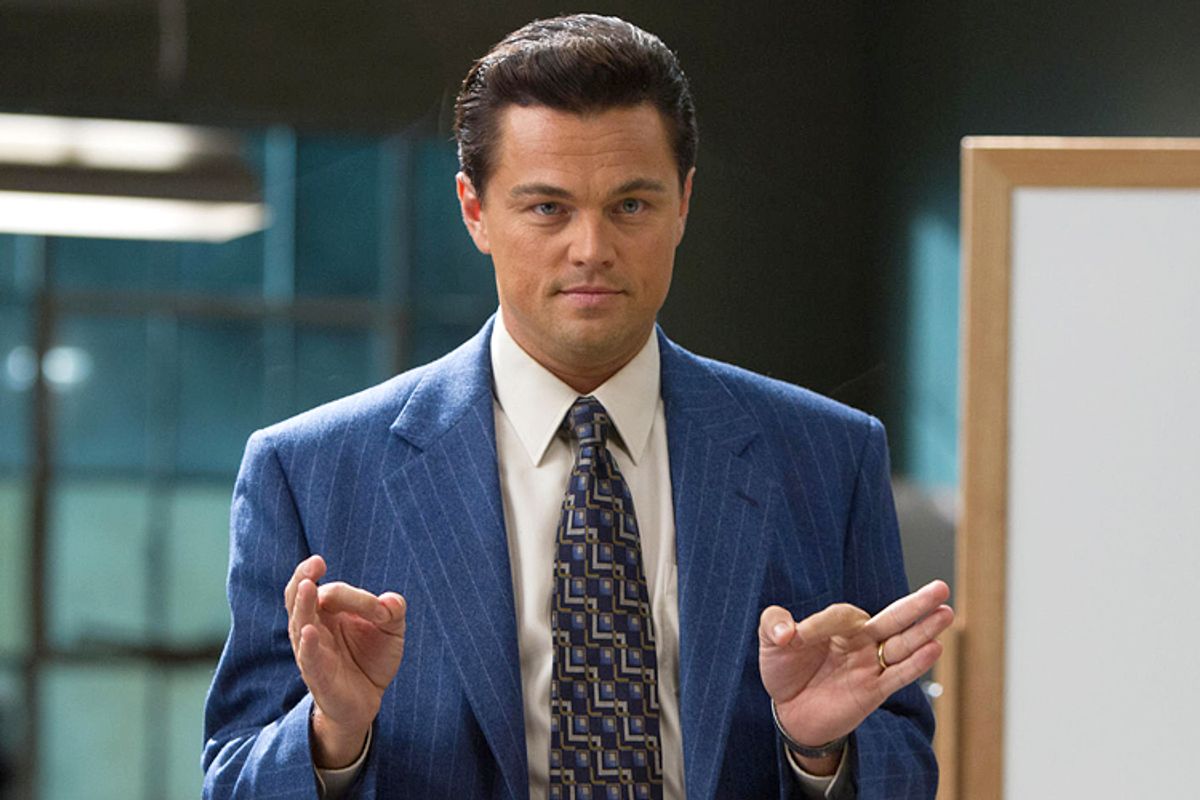 "The Wolf of Wall Street" gave Leonardo DiCaprio his fourth Oscar nomination, and given DiCaprio's long career and sterling reputation, that number seems low. DiCaprio got an Oscar nomination for his breakout role in "What's Eating Gilbert Grape," then for performances as an adult in "The Aviator" and "Blood Diamond." That last film, a message movie that would have appealed to Oscar voters even if DiCaprio hadn't also been forced to utter lines in a South African accent, was unluckily released the same year as "The Departed" and thus kept DiCaprio from getting honored for his best work to date. It was no matter -- Forest Whitaker won that year, anyway, for playing Idi Amin in "The Last King of Scotland."

That's the sort of role that wins Oscars -- playing a famous person, or undergoing some notable transformation -- and that's the sort of role DiCaprio rarely takes. Only in "The Departed," "Django Unchained" and "Blood Diamond" has he saddled himself with a heavy accent. He plays recognizable historical figures rarely, too: He might have won an Oscar for his Howard Hughes in "The Aviator" were it not for Jamie Foxx playing a more famous person in "Ray," and his makeup-saturated, goopy performance in "J. Edgar" is understandable (why wouldn't an actor take the chance to work for Clint Eastwood?) but ought to have convinced him to swear off biopics for life. He seems too comfortable in his life offscreen to invest the energy into transforming his body as Christian Bale or Robert De Niro have.

In "The Wolf of Wall Street," DiCaprio does a little of everything that appeals to the Oscars; his flat voice becomes a bit more nasal and Jersey to portray the real (but not widely famous) Jordan Belfort; he appears to have lost a bit of weight to play the youthful fellow. But DiCaprio doesn't give the Oscars what they like to reward.

The past several best actor winners have included Daniel Day-Lewis assaying the man on the $5 bill, Jean Dujardin stuntily performing without the use of his voice, and Colin Firth stuttering uncontrollably; all of the performances were quite good, but none allowed you to forget you were watching an actor in a movie. Leonardo DiCaprio's range is such that he won't or can't attempt such actorly tricks; instead, he builds a convincing character out of the quotidian, the baser instincts and emotions. It's uncommon to describe such a famous person as normal, but the acting in "The Wolf of Wall Street," even the most outsize scenes, is rooted in real and recognizable need and emotion.

Sure, DiCaprio gets a wild scene during which his body becomes loose as a jellyfish under the influence of quaaludes, but he also becomes a person -- a needy, grasping, angry person -- whom the viewer doesn't immediately perceive as Leo playing a part. Jordan Belfort and Jay Gatsby, DiCaprio's other 2013 role, are on the surface quite similar, both obsessed with money as a means to fill a void inside. And yet the performances are quite different, with Gatsby self-consciously building a myth of his own greatness with faux-casualness while Belfort confesses his sins to the audience with giddy glee.

Perhaps DiCaprio is too famous to attempt a transformation; it would seem somehow ludicrous for him to wildly change in order to portray a president or a person with a speech impediment. (Mercifully, rumored biopics on Hugh Hefner and Teddy Roosevelt have not yet come to pass.) He's stuck within the framework of himself. He almost certainly won't win an Oscar for "The Wolf of Wall Street," but he deserves one -- not merely for what he does with his body in the quaalude scene, but for the frustrated angst he displays when his wife (Margot Robbie) denies him sex, or for the giddy excitement he displays when he decides to risk his livelihood by staying at his brokerage firm. For all the directorial fripperies and excess in "The Wolf of Wall Street," at its center is a character DiCaprio truly knows, and shows us in a frighteningly plain manner.

Instead, the likely winner is Matthew McConaughey, an actor whose career reinvention has been ongoing for several years, culminating in significant weight loss for "Dallas Buyers Club," in which he riffs on his persona. And good for him. But it goes to show that as famous as DiCaprio is (and he's by far the most famous in the best actor category), he's at a disadvantage, because he has no persona to riff on or subvert. His rise to fame began solely because he was good-looking and liked to go out in New York, and his real-life personality is completely opaque to the audience.

DiCaprio's work, generally, is not the sort Oscar likes to give a trophy for. "The Wolf of Wall Street" comes the closest in his filmography to the sort of bold, over-the-top acting Oscar honors, and if he loses, he simply won't win until he gets a late-career Oscar that feels more like an award for lifetime achievement than for any one performance. That's the sort of best actor trophy the academy gives when there isn't a case of weight gain or loss or accent work or historical impersonation happening. Take heart, Leo: Paul Newman and Jeff Bridges, two actors whose work didn't call attention to itself, ended up getting Oscars eventually.