A history of hate: 4 ways anti-LGBTQ discrimination is still completely legal in Arizona

SB 1062 may be dead, but discrimination against LGBTQ people is still the law of the land in Arizona 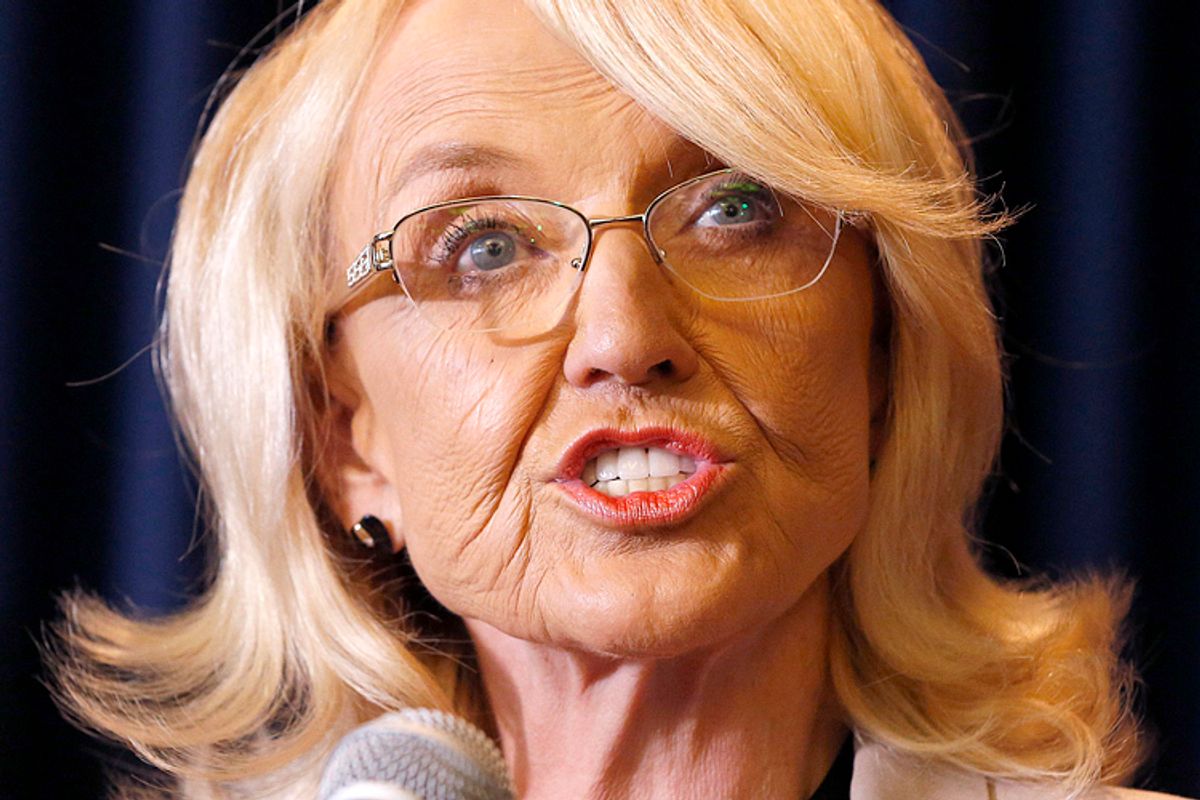 Arizona's SB 1062 was a terrible bill and Jan Brewer was right to veto it.

Brewer, who is usually willing to go to bat to discriminate against LGBTQ people, ultimately decided to align herself with the majority consensus around the measure's distinct awfulness. In addition to being universally maligned among LGBTQ individuals and allies, the "Religious Freedom Restoration Act" was equally hated by 1) Republicans who voted for it, 2) corporations with otherwise abhorrent policies, 3) national sports franchises with considerable track records of homophobia.

In addition to giving private businesses even more power to discriminate against LGBTQ individuals and families, the measure was broad enough to invite a host of other forms of discrimination based on "sincerely held" religious beliefs. It also would have established a new category of corporate personhood in Arizona, a precedent with troubling and expansive implications.

Criticism of the bill reached a fever pitch this week, which perhaps makes this a good time to look at existing laws in Arizona that do very similar things to what this measure would have done. The bill may be dead, but LGBTQ rights are still precarious in the state. Discrimination of the sort sanctioned by SB 1062 is still in many ways perfectly legal in Arizona. (And while Arizona is the chosen object of scrutiny in this piece, it's important to note that these problems exist across the country and also stem from a lack of federal protections against LGTBQ discrimination. Get it together, America.)

Here are four laws (or the absence of laws) that create a separate and unequal status for LGBTQ individuals and families in Arizona:

This may be obvious, but it is nonetheless true: Arizona's ban on equal marriage matters.

As I've written before, marriage equality is not a solution to most issues of LGBTQ justice, but the practical and legal implications of denying consenting adults the ability to enter into marriage contracts are considerable. Gay couples in Arizona are currently legally prohibited from accessing close to 1,200 federal benefits and privileges, provisions that range from the sublime to the mundane.

Gay couples in Arizona, for example, cannot access the same tax benefits as their straight married neighbors. They are denied entitlements around property and inheritance, child custody rights and family medical leave. They also can't, in plenty of places, do simple things like include their long-term partners on a family membership to the local zoo.

A wave of recent court decisions, Texas being the most recent, have ruled that prohibitions against marriage equality in states like Arizona constitute a violation of the equal protection clause of the 14th Amendment. But you don't need to be a federal court judge to know that the exclusions entailed in such laws add up, and take a significant financial and personal toll on LGBTQ families.

Straight married couples looking to adopt are given preference over gay couples.

There is no explicit prohibition on LGBTQ families adopting children, but a measure signed into law by Jan Brewer in 2011 creates preferential treatment for straight married families looking to adopt.

The law requires state-funded and private adoption agencies to "give primary consideration to adoptive placement with a married man and woman, with all other criteria being equal.” As Igor Volsky at ThinkProgress noted at the time the measure passed, this doesn't mean that gay couples (and single people of any sexual or gender identity) can't adopt children in Arizona, but it does mean that they are automatically placed further down the list because of their sexuality or relationship status.

Ample data (and plain common sense) shows that LGBTQ families are perfectly nice and boring families, and that kids raised by LGBTQ parents grow up well loved and healthy.

In fact, the children of gay parents have repeatedly been found to be doing equally well or better than their peers being raised by straight parents. In one study, researchers at Melbourne University in Australia collected data on 500 children and found that children growing up in gay and straight families matched pretty equally when it came to self-esteem, emotional well-being and the amount of time they spent with parents. However, when it came to overall health and family cohesion, the children of gay parents did even better than the national average.

There is no compelling legal basis for giving certain kinds of families preferential treatment, and yet that is precisely what Arizona does.

Landlords can discriminate against LGBTQ people and get away with it.

Gender and sexual identity are not protected statuses under federal fair housing laws, and Arizona has no statewide regulations in place to ensure that LGBTQ individuals are not discriminated against in their pursuit of housing.

This means that landlords can evict or refuse to rent to LGBTQ tenants, which means that LGBTQ people can't expect to have the same access to housing that their peers receive.

This kind of discrimination would have been further exacerbated if SB 1062 became law, but discrimination in public accommodations -- including housing -- is still perfectly legal in the state.

This is another instance where the absence of laws -- both federal and statewide -- means that discrimination is sanctioned in the state. There are currently no state laws banning a business owner from firing an employee because that employee is LGBTQ. And because there is no federal law providing these protections, people in all but three cities in Arizona are vulnerable to being arbitrarily fired -- or not hired in the first place -- because of their gender or sexual identity.

The absence of protections for LGBTQ individuals in federal and state anti-discrimination laws is also the reason that SB 1062 was only the worst iteration of a law that already empowers businesses to target LGBTQ individuals for unequal treatment.

“The only place LGBT folks have protection in Arizona is a couple of cities, like Flagstaff and Tucson and Phoenix," Kory Langhofer, an attorney with Brownstein Hyatt Farber Schreck, recently told the Arizona Capitol Times about what SB 1062 would "change" in Arizona. "What [SB 1062] would do is create an exemption to the local anti-discrimination ordinances protecting sexual orientation. So if you’re in Gila Bend or someplace where there’s no anti-discrimination ordinance, this doesn’t do anything for you. It’s kind of a state law that’s an exemption to nothing."

In other words, SB 1062 was awful, but LGTBQ Arizonans are still incredibly vulnerable to discrimination. They're mostly on their own, legally speaking.

One has to wonder what John McCain, Apple, Delta, the NFL and other critics of the now-dead measure have to say about that.