Chris Christie having trouble moving on from that bridge thing 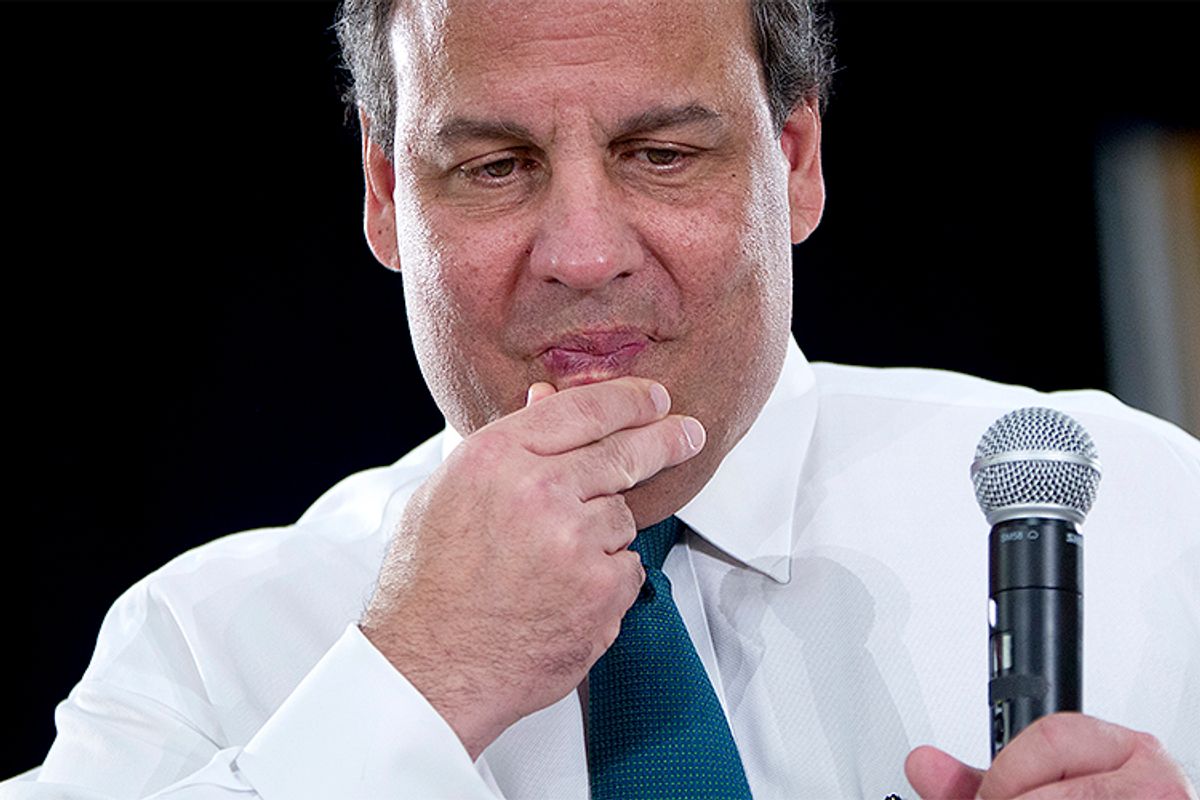 New Jersey Gov. Chris Christie's plan for getting past "Bridgegate" was to simply get past it. As soon as the emails showing that his aides and allies purposefully created traffic congestion as part of some sort of retribution plot were reported in the press, Christie fired aide Bridget Kelly and Port Authority executive David Wildstein. After taking a day to compose himself (or get his story straight), he held an epic press conference at which he spoke until he could plausibly argue that he had answered every single question reporters had for him. Since then he's mainly appeared before (suspiciously) friendly town hall audiences. He seems to think he's done enough to get past the worst of it. Yesterday, Christie told a reporter, "You folks are the only people at the moment who are asking me about this."

Unfortunately, Kelly and Wildstein are also still talking. They are communicating with us from the distant past (a few months ago) thanks to Wildstein's very helpful cooperation with New Jersey state legislators investigating the scandal. Wildstein -- who has a reputation for being "capable of anything" -- looks to be working to undermine his former ally with a steady stream of documents. The most recent batch include a return of the headline-friendly "traffic problems" line.

Kelly and Wildstein were texting last August about prominent New Jersey Rabbi Mendy Carlebach. Carlebach -- not exactly a liberal, as he was a chaplain at the 2004 and 2008 Republican National Conventions -- had somehow pissed Wildstein off, though it's unclear how. (Carlebach claims to have no idea what he could've done.) And what do Christie's allies do to people who piss them off? Exactly. Here are the messages, from the Bergen Record (via TPM):

In the texts about the chaplain, Wildstein sent Kelly a picture of Rabbi Mendy Carlebach, later writing: “And he has officially pissed me off.”

“We cannot cause traffic problems in front of his house, can we?” Kelly wrote.

“Flights to Tel Aviv all mysteriously delayed,” wrote Wildstein, an executive at the bi-state agency that controls the region’s airports.

These texts took place just a few days after the "time for the traffic problems in Fort Lee" email from Kelly to Wildstein, and a few weeks before the Fort Lee "traffic study" lane closures were carried out. This "traffic problems" suggestion looks to be a joke, and it doesn't appear that any sort of retribution against Carlebach actually happened, but the fact that the intentional creation of traffic problems was already being treated as a joke between Wildstein and Kelly might indicate that the practice happened more often than just the one time in Fort Lee. (Or else it suggests that they were just so excited about their plan for Fort Lee that they couldn't shut up about it.)

One thing Chris Christie probably does not want is for text messages like this to continue surfacing in the press weeks after the scandal blew up, while he is in the midst of attempting to convince voters and the press that he and his office have moved past the whole thing. But there is still the threat of more to come. Wildstein's attorney sent the committee new copies of documents he already disclosed, but with fewer portions redacted, revealing the identities of some of the people he was communicating with. Much is still redacted, but Wildstein could always negotiate to release a bit more. The fact that the target of these messages was a Christie ally, not a small-time Democratic politician, makes them all the more damaging, since part of Christie's survival strategy rests on having his party and his allies close ranks and declare the investigation a partisan witch-hunt. It's enough to make a guy wish he hadn't surrounded himself with incompetent sociopaths.