"The Americans" recap: The danger of a double life

In the season opener, Elizabeth and Phillip start to see how their KGB work could threaten their family 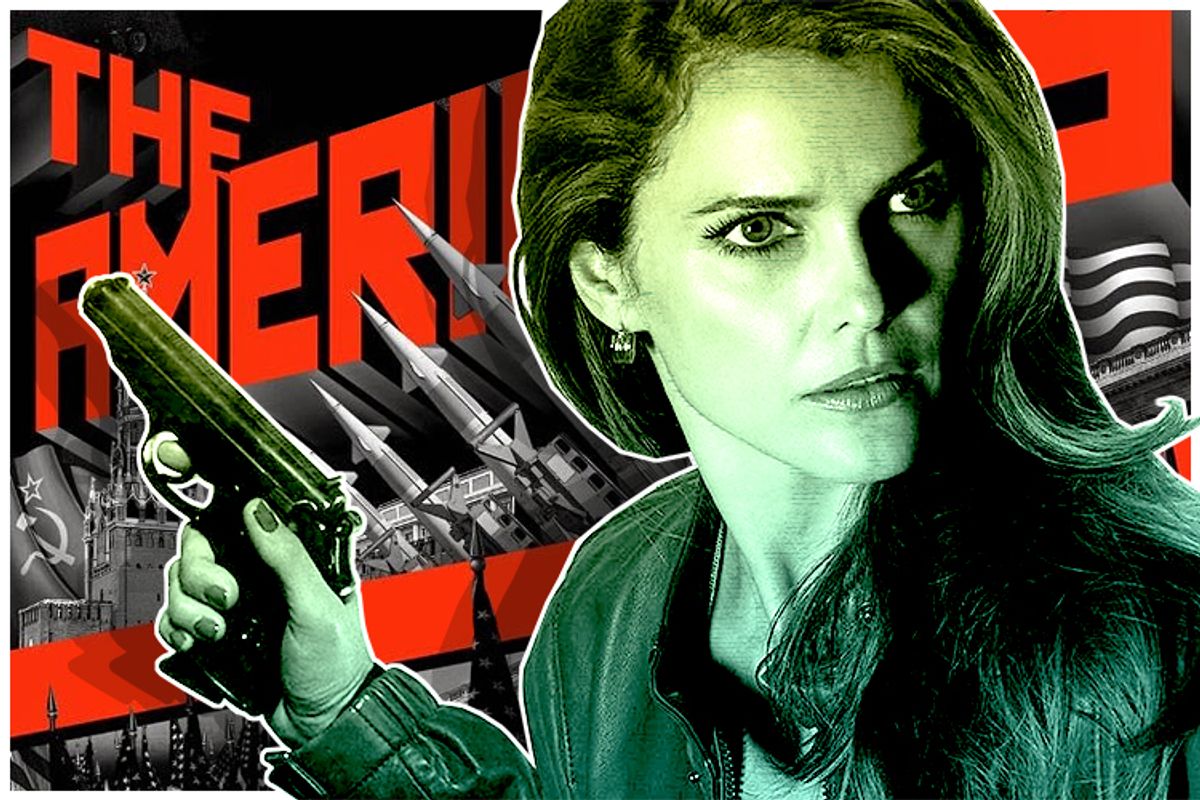 When we left Elizabeth and Philip Jennings—the KGB spies posing as an American couple in the suburbs of Washington, D.C. early in Reagan’s first term—at the end of the first season of “The Americans,” they had barely survived an operation that turned out to be an FBI set-up. Elizabeth (a wonderfully ferocious Keri Russell) had been shot; the shooter was Stan Beeman, the FBI agent (Noah Emmerich) who just happens to be the Jennings’ neighbor and “friend.”

This new season begins two months later, when Elizabeth, who has finally recovered from her life-threatening gunshot wounds, leaves a safe house in the woods. As she drives into the darkness, she almost runs into a deer. And when she comes face to face with the creature she nearly killed, she has a deer-in-headlights moment of her own.

Meanwhile, her husband, Philip (the amazing Matthew Rhys), is performing another operation—and “performing” is the best word for what he and his wife do, since their job as spies requires them to play all kinds of roles, wearing all kinds of wigs. He is dressed as a cowboy—the ultimate ‘American’ archetype—and meeting, in an Afghan restaurant, with representatives of the mujahedeen. “We will drive the Godless Soviets from Afghanistan,” one of them declares. (The Soviet invasion of Afghanistan in December 1979 is what prompted the United States, and sixty-five other countries, to boycott the Moscow Olympics in the summer of 1980.) One of the Afghan men presents Philip, whom they presume to be a CIA agent, with a sword: “This blade is my gift to you. I killed a Russian soldier with it.” Killing is difficult, he adds, “but you get used to it.”  Philip, as we learned in season one, is ruthless when he has to be. “America can’t protect you. The KGB is everywhere,” he tells the men as he kills them. And when he escapes through the restaurant kitchen, he reassures the chef that “It’s okay,” right before shooting the man in the head.

The very next day, Philip is back is his main role as suburban family man. (Like “Breaking Bad’s” Walter White, the protagonists on this show live double lives. And like “Breaking Bad,” this show has brilliant moments of comedy interspersed with the violence.) He brings Elizabeth home, where her kids, who were told she’d been caring for a sick aunt in Pennsylvania, are thrilled to see her. “You look older to me,” Elizabeth tells her teenaged daughter, Paige. “I am,” Paige (Holly Taylor) replies. Paige is old enough to start getting suspicious; when she begins to suspect that her parents aren’t being honest with her, she starts gathering intelligence of her own. She may be getting older, but she’s still young enough to be shocked when she walks in on her mother giving her father a blowjob. The hilarious scene at breakfast the next day, when Paige’s clueless younger brother Henry tells a story filled with unintentional double entendre (“so big his jaw hurt the next day”), while Paige and her parents squirm, is reason enough to watch this episode. (Americans may be Puritanically prudish when it comes to sex, but “The Americans” is not.)

Meanwhile, at Henry’s backyard birthday party, FBI agent Stan Beeman and his wife, Sandra, are among the guests. Stan doesn’t know that his hosts are the pair of “illegals” (KGB agents posing as Americans) that he’s been hunting. Sandra doesn’t know that her husband has fallen in love with an enchanting double agent named Nina Sergeevna (Annet Mahendru). And Paige and Henry have no idea that their parents are actually Russian, or that their father has another fake marriage, to a woman named Martha Hanson, who works for Stan’s boss at the FBI, Agent Gaad. Everyone on “The Americans” is acting. And that acting motif is underscored later in the episode, when Stan watches Meryl Streep in “The French Lieutenant’s Woman.” He watches it first with a tearful Nina, with whom he discusses Streep’s acting; and then has to sit through it again with his wife, who is also moved to tears.

In this episode, we meet another pair of “illegals,” Emmet and Leanne, who are also successfully passing as Americans and have two American children. Philip and Elizabeth can be open with these colleagues; who else can understand their strange existence, as fake Americans raising real American children? Emmet and Leanne's son is off to Carnegie Mellon in the fall; their 14-year-old daughter is a cheerleader. They seem to be living the American dream. But then an operation at a suburban fair goes wrong, and Emmet and Leanne are killed, along with one of their children. The gruesome murder, in an Alexandria hotel room, is chalked up to D.C. crime (this is late 1981, after all, when Washington was the murder capital of America) but Philip and Elizabeth know the truth. And they’re forced to confront, up close, the risks of their double lives. Philip and Elizabeth love their country, but they also love their kids. This season, the tension mounts between country and family, between Motherland and motherhood, between patriotism and paternity.