What every writer needs to succeed

Sure, practice and research are important. But there's something else that might matter even more: Luck 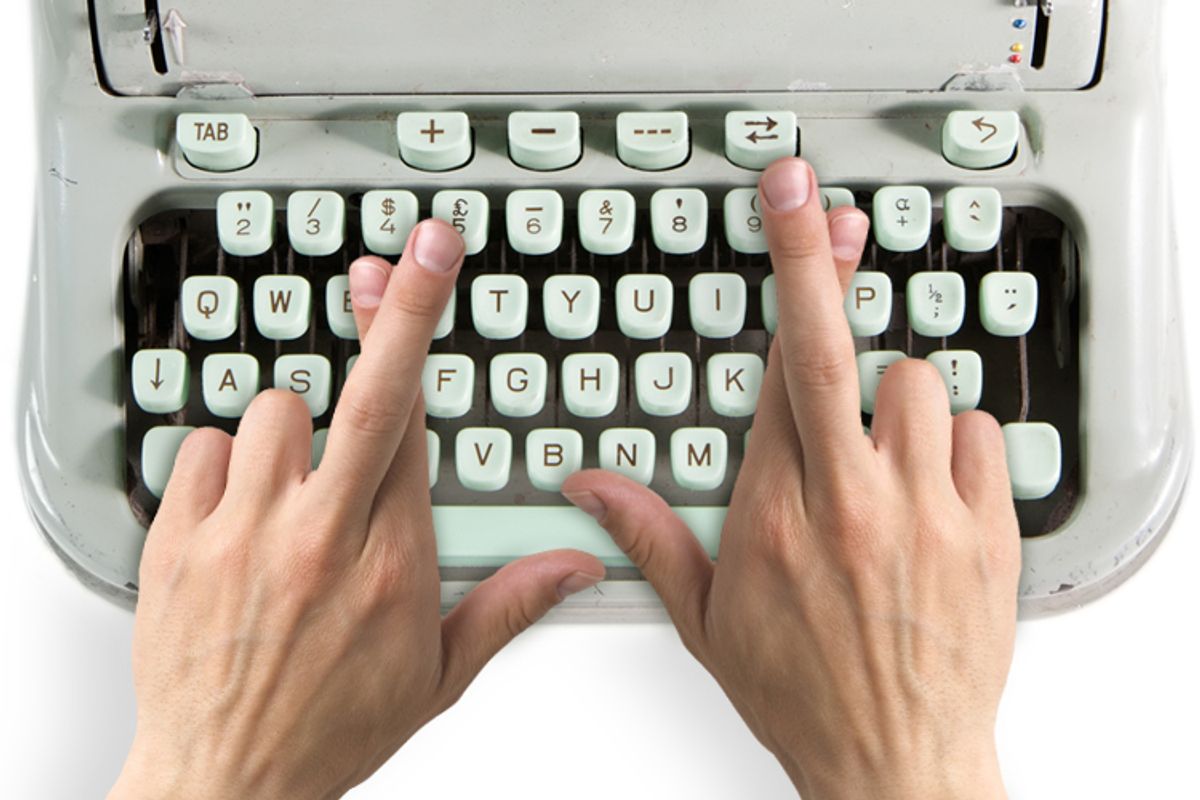 Studies find that anyone can become an internet troll (Borya Galperin, Winston Link via Shutterstock/Salon)
--

The Internet is filled with writing, and, as an inevitable corollary, it is filled with advice on how to be a successful writer. Poke around and you can get John Green to explain to you that the secret of writing YA fiction is to find "emotional truth." You can get Nicholas Sparks to tell you that "becoming successful in anything requires perseverance." More practically, you can find Alyssa Rosenberg explaining that to be a blogger/cultural journalist, you need to "read everything and everyone on your subject. If you're a day late on an old idea, you're not of any use." You can even find Rilke declaring that, "Nobody can advise you and help you, nobody." Which seems a bit overdramatic, but that's poets for you.

In short, if you want to know how to be a successful writer, there is specific advice, general advice, logistical advice and spiritual advice. But in all this advice, the most important element, the one, true, absolute key to personal, financial, aesthetic and every other kind of success as a writer, is invariably left out. Work ethic, knowledge, skill, perseverance — none of them is as important as the one, single most important thing.

Which would be luck.

Nobody likes to talk about luck. If you're a successful writer, you, of course, like to think that you got where you got by work and skill, grit and talent. Similarly, if you are trying to break into writing, you want to know what you can do and how you can do it. You don't want to be told that, to some fairly consequential degree, your success, or lack thereof, is beyond your control.

But whether folks want to focus on it or not, the fact remains that, as a writer of middling stature, both my successes and failures have had as much to do with happenstance as with my work ethic or my talent. For instance, way back in 2008, I started to freelance for a brand spanking new website called Culture 11 — a much-buzzed venture that had ambitions to be a conservative-centrist alternative to Salon. I had a great relationship with my editor (the lovely Peter Suderman), and in some alternative universe, maybe, possibly, if everything had gone right I could have ended up as a recognizable byline at a hip expanding venture, linked to and admired far and wide. But, alas, the housing bubble collapsed, the website folded, and I went back to climbing from complete obscurity to semi-obscurity, rather than vaulting into relevance.

It's easier, perhaps, to invent ways in which things might have gone better than it is to imagine how they could have been worse. But one of my first breaks came when I placed a piece at the Comics Journal. The essay had been sitting around gathering dust until the old editor left and the new editor, Dirk Deppey, saw it and got in touch with me. A lot of my early exposure is based on the fairly arbitrary fact that one person happened to like my work. It's hard to see that as some sort of objective talent (after all, the previous editor didn't like it). And it's not perseverance either — I didn't keep sending pitches, the person looking at the old pitch just changed. My break wasn't a function of virtue. It was serendipity (and the fact that Dirk Deppey is awesome).

Being in the right place with the right editor, or the wrong place with the wrong financial collapse, can have major effects on a writer's career. But that's really only the tip of the roulette wheel when you're talking about luck. Probably the single most important thing you can do to become a writer is to have parents who read to you. After that, it's to have parents who can afford to send you to a high-powered school where you'll get a fancy education and meet the right sorts of movers and shakers. And if your own family happens to have publishing connections — well, all the better for you. In writing, as in everything else, the best way to win the race is to start out ahead. In my case, I was able to start freelancing largely because my wife has a full-time job with benefits. If her career situation were different, or if I were single, or if I were gay and in a state without marriage equality, I wouldn't have had the support structure necessary to write full-time, which means I probably wouldn't be writing this on Salon right now.

This isn't to say that I've stumbled completely by accident into what success I've managed. As I've mentioned before, I work just about all the time. I'm obsessive about meeting deadlines. I write very fast; I'm reliable; I have a lot of interests; I've read a good bit. I'm not a grand-master-level networker, but I could be worse. Those are all things that have helped me get gigs and pursue interesting projects and make a living as a writer. But that (moderate) success doesn't mean that I necessarily am doing something better, or more right, than lots of talented, hardworking folks who, for any number of reasons, didn't get a break. Advice from those who have jumped through the hoops can be helpful, and there's no reason not to learn from other's experiences. But it's good to keep in mind that if there were a sure formula for success, everyone would be successful — and that if talent and hard work were the key to fame and fortune, there wouldn't be so many talentless hacks with sinecures. Meritocracy's a myth. Whether you're offering writing advice or receiving it, that's a good thing to keep in mind.