A scam all along: Turns out GOP's "tax the rich" plan is full of it 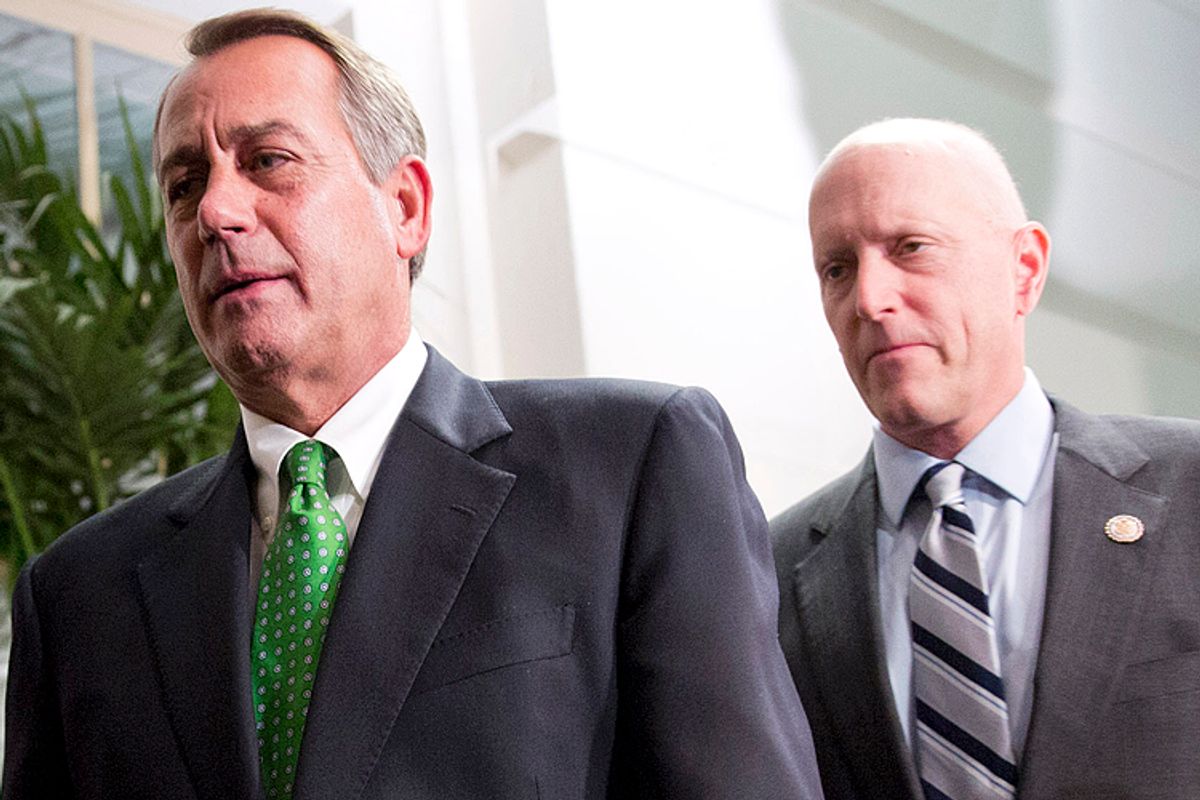 It's all ancient history now, but try thinking back to the months leading up to the 2012 elections and all the ink, pixels and decibels we all devoted to debating whether the math in Mitt Romney's tax plan worked. Republicans, including Romney, insisted his plan would be revenue neutral without raising taxes on middle-income earners. Most experts and critics concluded that, no, it would be impossible for Romney to slash upper-income tax rates as substantially as he proposed, without either blowing a hole in the budget or saddling middle-income earners with a big effective tax increase.

On Wednesday, with almost no fanfare, the Republicans' top tax writer acknowledged that his fellow partisans were full of it.

Without buy-in or blessing from party leaders, Rep. Dave Camp, R-Mich., introduced a genuinely comprehensive tax reform plan that claims to be both revenue and distributively neutral. That is, no net tax increase or tax cut, and at the end of the day, the money's still coming from the same places along the income scale. Thus, to no one's surprise, he had to abandon the GOP's enduring fantasy of reducing the top tax rate to 25 percent.

For finally putting meat on the bare bone of GOP "tax reform" platitudes, Camp has won praise, including from many serious liberals, and much of it is deserved.

But to a substantial degree his plan is still a scam. Instead of hiding the ball like Romney did, he's pulled it out and kicked it way into the middle distance where you have to squint to even see it.

Economists at the liberal Center on Budget and Policy Priorities -- including Joe Biden's former chief economist Jared Bernstein -- were, I think, the first to notice the bait and switch. Other opinion writers, including Kevin Drum and Jonathan Chait, picked up on the observation but gave it glancing treatment relative to their broadly positive assessments of the overall plan.

But the real problem is on the revenue side. There are far too many timing gimmicks that temporarily increase tax revenues in the scoring window (the first 10 years) to create the impression of lasting revenue neutrality and positive economic incentives. But once these gimmicks expire, the plan will collect significantly less revenue, leading to all kinds of headaches for both deficits and growth:

– Mr. Camp proposes changes to the way retirement savings are taxed so that, compared with the current system, his plan will generate higher tax liabilities and more revenues in the near term and lower liabilities in the long term. That is, by providing retirement savers with an incentive to move into Roth-style IRAs, they’ll pay more in taxes in the first 10 years of the budget window. But those revenues will not be there in the next decade, while his lower rate structure will still be locked in.

–The corporate rate is phased in slowly, so revenue losses occur outside of the budget window.

–The plan eliminates accelerated depreciation on equipment purchases by businesses, a move that just shifts timing of tax receipts to now versus later.

–There’s a one-time transitional tax on deferred foreign earnings as part of the territorial package.

These aren't inexpensive gimmicks either. I've made more extensive inquiries about their size and distribution, but a quick look through the Joint Committee on Taxation's official revenue estimate (PDF) suggests they are quite costly, and my very strong hunch is that a distributional analysis would suggest these disappearing revenue sources (or slowly phased in revenue sources) come disproportionately from wealthy sources.

So in the second decade this plan automatically transforms into a pretty big effective tax cut for the rich. Which brings us back to the 2012-era question of whether the end game here is to blow up the budget or tax the middle class. And it looks like the answer is both.

Most people recognize chained CPI as the stealth Social Security benefit cut that popped into and out of a bunch of fiscal negotiations over the past several years. But the index can be applied to any inflation-adjusted policy, including tax brackets. And when you index tax brackets to a slower rate of inflation, over time you subject more and more income to higher tax rates. This is a regressive effect. Camp's main bracket begins at $72,500 for joint filers. And there are no brackets above $400,000. So most of the super-rich people's income won't be ensnared by this effect at all.

There's a compounding effect, too, so in the second decade, when the wealthy will be enjoying the phaseout of Camp's temporary revenue measures, the middle class will be getting squeezed harder and harder by this slowly rising bracket.

And yet, despite this and other measures that phase in over time, CBPP concludes, "the number and magnitude of provisions that tilt in the other direction make it difficult to believe that the plan would not lose revenues over subsequent decades."

Camp made huge strides for GOP policy realists by actually getting into the marrow of the tax code and coming up with something that's neither vacuous, nor blatant reverse Robin Hood-ism. But at the end of the day, he ran up against the same dilemma that Romney and Paul Ryan and others encountered. And rather than resort to vagueness and evasion, he pushed the math and regressiveness problems into the out years, where they're much less visible.