Charles Koch says he's trying "to save the country"

In a rare interview, the influential right-wing donor says his goal is to fight cronyism and promote cooperation 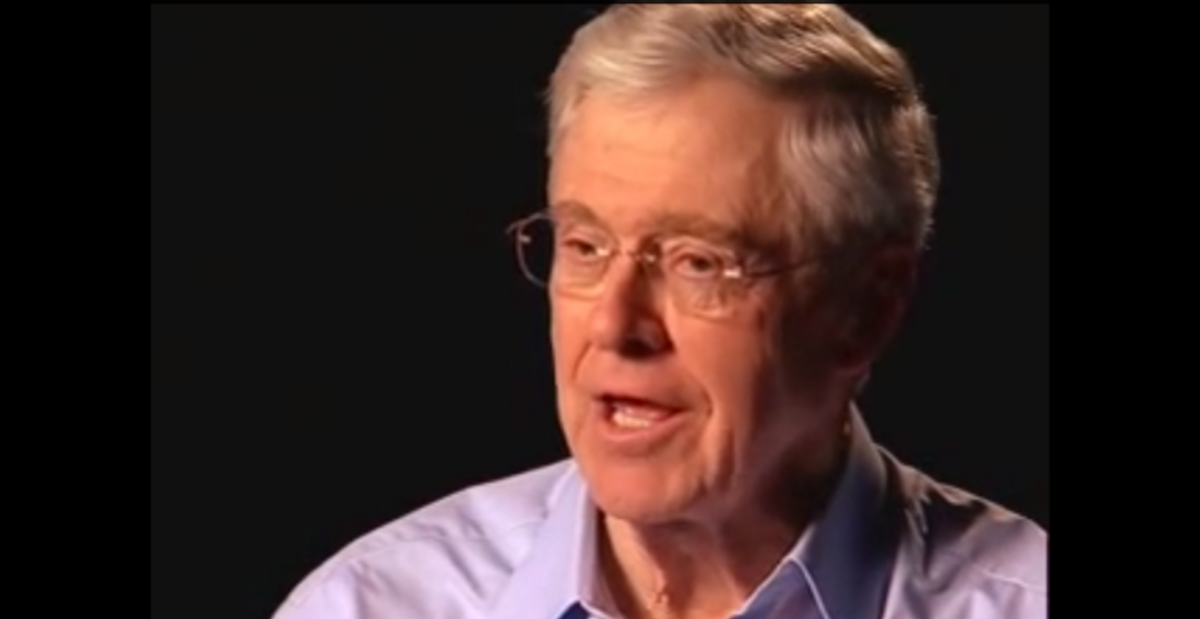 Like the rest of his family, Charles Koch isn't one to frequently sit down for an interview. But in an interview with the Wichita Business Journal, the conservative billionaire magnate spoke at length about his life in the world of business and touched upon the philosophy that guides his family's prolific political donations.

When asked by the interviewer why the Kochs continue to be so involved in politics, despite the backlash from the left as well as those who decry the influence of the hyper-wealthy on America's political system, Koch answered in somewhat messianic terms, arguing that if the Kochs don't work to "save the country," nobody will.

"It’s like [former professional golfer] Lee Trevino used to say," said Koch, "somebody asked him how are you winning all these golf tournaments, and he said, 'Well, somebody has got to win them and it might as well be me.'" He continued, saying, "That’s the way I am on this. There doesn’t seem to be any other large company trying to do this so it might as well be us. Somebody has got to work to save the country and preserve a system of opportunity."

Koch then went on an extended riff decrying the influence of "cronyism" in the American economy:

I think one of the biggest problems we have in the country is this rampant cronyism where all these large companies are into smash and grab, short-term profits, (saying) how do I get a regulation, we don’t want to export natural gas because of my raw materials ... well, you say you believe in free markets, but by your actions you obviously don’t. You believe in cronyism. And that’s true even at the local level. I mean, how does somebody get started if you have to pay $100,000 or $300,000 to get a medallion to drive a taxi cab? You have to go to school for two years to be a hairdresser. You name it, in every industry we have this. The successful companies try to keep the new entrants down. Now that’s great for a company like ours. We make more money that way because we have less competition and less innovation.

Interestingly, Koch explained that he sees his opposition to "cronyism" as fundamentally his way of looking out for the little guy:

[F]or disadvantaged people trying to get started, [cronyism's] unconscionable in my view. I think it’s in our long-term interest, in every American’s long-term interest, to fight against this cronyism. As you all have heard me say, the role of business is to create products that make peoples’ lives better while using less resources to do it and making more resources available to satisfy other needs. When a company is not being guided by the products they make and what the customers need, but by how they can manipulate the system — get regulations on their competitors, or mandates on using their products, or eliminating foreign competition — it just lowers the overall standard of living and hurts the disadvantaged the most. We end up with a two-tier system. Those that have, have welfare for the rich. The poor, OK, you have welfare, but you’ve condemned them to a lifetime of dependency and hopelessness. Yeah, we want hope and change, but we want people to have the hope that they can advance on their own merits, rather than the hope that somebody gives them something. That’s better than starving to death, but that, I think, is going to wreck the country.

Koch also went on to describe his view of what a moral capitalism looks like. For those expecting Koch to endorse the value-neutral pro-free market argument that is common among libertarians, his insistence that one should only profit from doing work that's valuable to the community may be a surprise:

And it’s about making money honorably. People should only profit to the extent they make other peoples lives better. You should profit because you created a better restaurant and people enjoyed going to it. You didn’t force them to go, you don’t have a mandate that you have to go to my restaurant on Tuesdays and Wednesdays or you go to prison. I mean, come on.

Asked if he thinks America can have "a more collaborative political dialogue and process," Koch went on to claim that the Koch family's funding of right-wing activist groups and organizations is primarily motivated by a desire to raise the tenor of the country's political debate. "That’s our No. 1 focus now, to change the national conversation from name calling to a real debate on what policies will best create opportunities to improve their own lives," Koch said.

Despite Koch's professed noble intentions, however, he laments that he and his brothers are demonized by many people, some of whom he describes as people with which "you cannot have a conversation":

When you start attacking cronyism and people’s political interests, it gets nasty. We’ve been called every name under the sun. And some of this stuff is ridiculous. One of them said that the reason we supported a number of governors in the upper Midwest was because we had a secret plan to control all the water in the Great Lakes. I’m still trying to figure out what to do with it all, other than go drown in it. That’s about the only thing I can come up with. The one that takes the cake, this individual said that the reason David gave $100 million to New York Presbyterian Hospital is to enable us to take over the medical care industry. You cannot have a conversation with people like that. Either they’re just intent on anything to demonize us and destroy us and discredit us, or they’re just in outer space.

For more on Charles Koch's fight against cronyism, you can check out this piece from the American Prospect on how greatly Koch Industries benefits from government subsidies. And for more on how the Koch brothers try to elevate the national political debate, check out this Atlantic piece on a recent Koch-funded ad depcting Obamacare as an evil Uncle Sam intent on sexually assaulting American citizens.