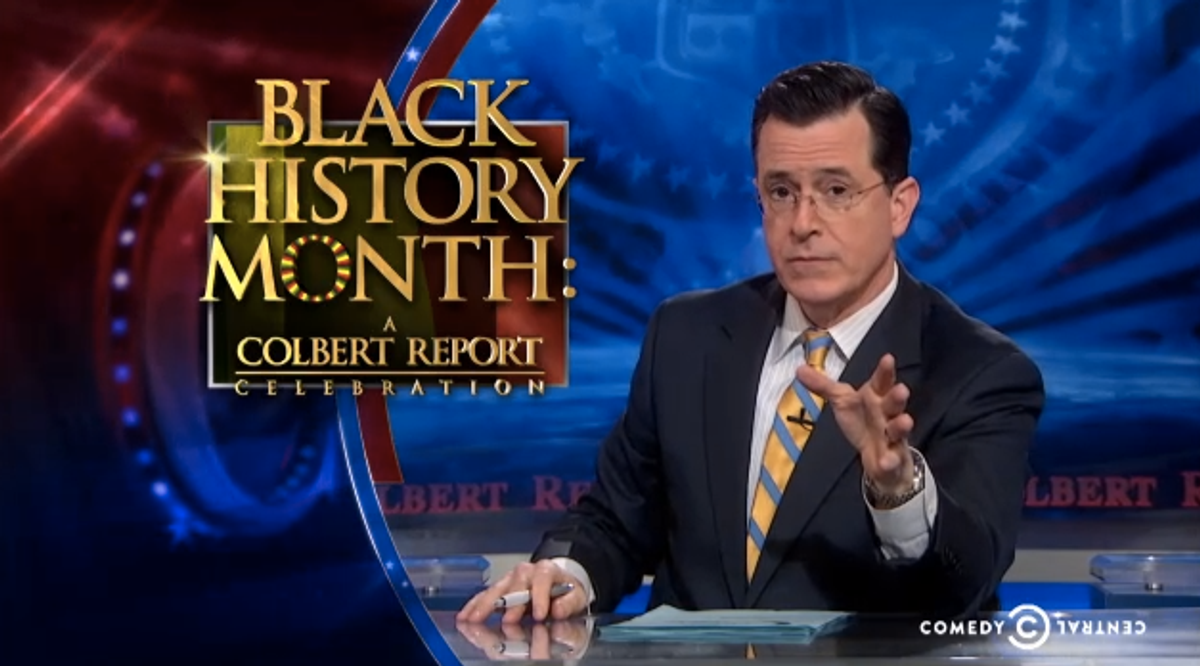 On the second to last night of the month, Stephen Colbert announced that "The Colbert Report" will be "dedicating the rest of February to African-American heritage" in honor of Black History Month."It is such a rich, multifaceted culture for white people to embrace and make less black," Colbert joked.

The comedian was fascinated by a recent NPR segment on the perception of race in America, in which Stanford sociologist Aliya Saperstein shared her findings that argue that an individual's race isn't fixed -- it can change over time, and that these changes are often influenced by existing stereotypes.

Saperstein, along with researchers Andrew Penner and Jessica Kizer, pored over thousands of surveys from the Bureau of Labor Statistics' National Longitudinal Survey of Youth, which tracks its participants for several years. What Saperstein found from the responses was that "Twenty percent of the respondents in the NLSY survey experienced at least one change, and had the interviewer perceived them by race over the course of different observations."

"If someone went from being employed to being unemployed, or being out of prison to being in prison, or being off welfare to being on welfare, the interviewer was more likely to see the person as black -- after they experienced that sort of downward mobility -- than before," she said.

Saperstein found the same trends across other races -- for example, people who died from liver failure were more likely to be listed as Native American on the coroner's report, even if the family indicated another race.

According to NPR's social science correspondent Shankar Vedanta, the study suggests "that race is actually socially constructed. And this provides data for the theory at the individual level."

"One fascinating thing that Saperstein has found is that it isn't just other people's perceptions of you that change," Vendanta added. "The survey that she followed also asked people to report their own race. And she found that when people went to prison, they became more likely to think of themselves as black. And that's because their minds were also subject to this very same stereotypes."

Colbert summarized the finding more simply as, "Americans believe black people do certain things, therefore people who do those things must be black."

"Minorities simply have to behave in ways that change our perception of their race," he joked. "For instance, Mexicans: You can seem a lot less Mexican if you complain about all the Mexicans coming here to steal our jobs."

"Of course, the quickest way to achieve racial equality is just to send everyone to prison," Colbert said mockingly. "... then we would all be black. And once we're all black, maybe Americans will finally realize it does not matter what color you are ... so I pick white. I wonder what race that makes me seem like."