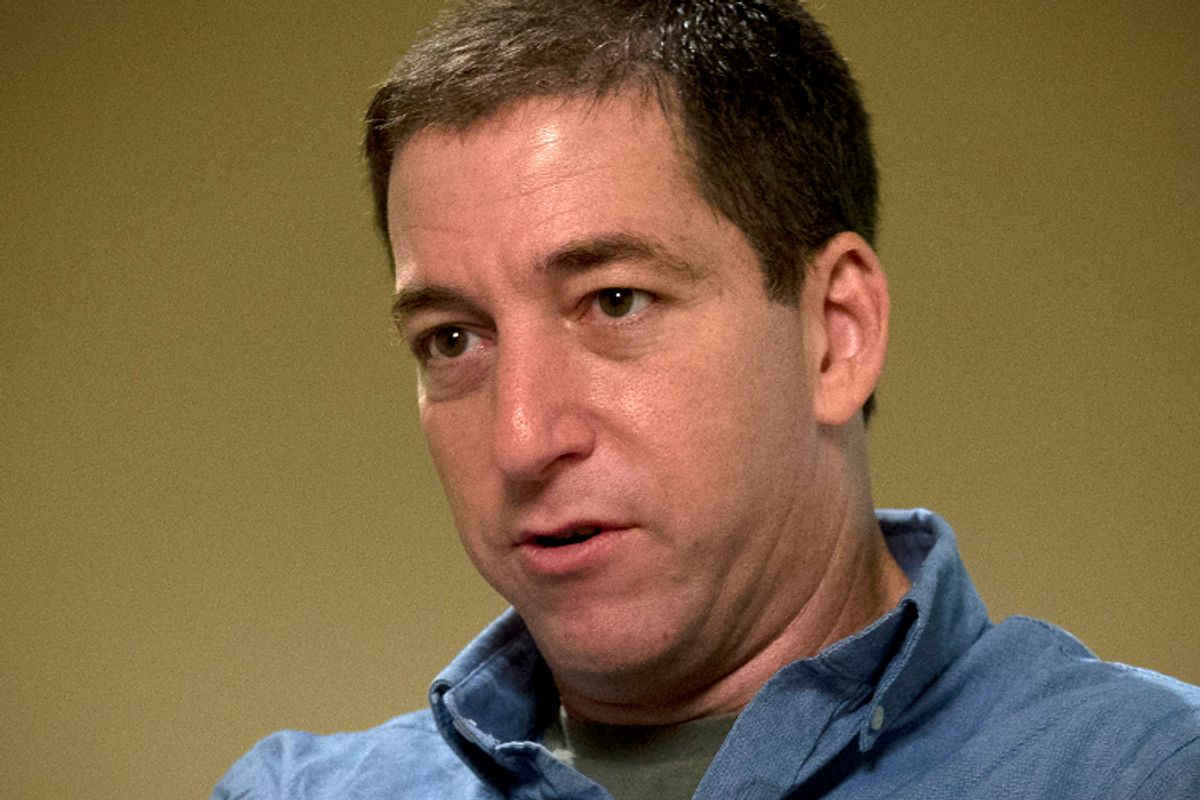 News over the past 72 hours has been dominated by the implosion of Mt. Gox, once the world’s largest Bitcoin exchange, and a report from Glenn Greenwald on how British intelligence agents have engaged in an extensive disinformation program to mislead Internet users.

Mt. Gox’s imminent demise has particularly gripped Reddit communities like r/Bitcoin and r/news following rumors of a $300 million hack that crippled the Japan-based business. Redditors from r/news have also obsessed over Greenwald’s latest Edward Snowden leak—only his story has been banned from the default subreddit.

All links to Greenwald’s piece on the Intercept, a publication founded by First Look Media and home to Snowden’s leaked materials, titled “How Covert Agents Infiltrate the Internet to Manipulate, Deceive, and Destroy Reputations,” has been removed more than six different times from r/news and at least once from r/worldnews.

In the article, Greenwald provides images from a Government Communications Headquarters (GCHQ) documents that show how the clandestine agency has tried to “control, infiltrate, manipulate, and warp online discourse, and in doing so, are compromising the integrity of the Internet itself.”

Greenwald also provides a great deal of context and explanation in his article, comparing it to similar programs allegedly carried out by the National Security Agency (NSA). Greenwald’s story was subsequently picked up on Boing Boing, RT.com, Daily Kos, Zero Hedge, and Der Speigel.

The removals have been the subject of numerous threads on r/subredditdrama (where redditors discuss “Internet fights and other dramatic happenings from other subreddits”) and r/undelete (home to submissions that moderators remove from the top 100 in r/all). Redditors are calling it an act of censorship.

“Sooo... the topic of discussion is direct evidence, in the form of leaked top secret documents, that the intelligence community goes to rather remarkable lengths to manipulate online social media,” damnface commented. “Does anyone see how the comments in this thread might look a little ironic at some point in the near future?”

The removal of the article was carried out by r/news moderators, volunteer gatekeepers of subreddits who have the power to ban users and content that either break Reddit’s official rules or rules instituted by each individual forum.

Moderator positions, particularly those on default subreddits like r/news, are coveted positions. All new registered Reddit users are automatically subscribed to these subreddits when they join, and most never unsubscribe from them. And thanks to Reddit's 112 million–plus unique visitors last month, a permanent place on Reddit's front page results in tremendous traffic and attention for sites submitted to these forums.

One r/news moderator who has drawn the ire of the community is BipolarBear0. He has defended the removal of the article citing r/news’s rule against posting “opinion/analysis or advocacy” pieces.

“Since the Firstlook article is primarily analytic and non-objective in nature, it wouldn't be allowed in /r/news,” he commented. “The story itself is irrelevant, it's simply how the story is presented—which is why any unbiased, objective and wholly factual news article on the event would be (and is) allowed in /r/news.”

Tuesday night, a rewrite of Greenwald’s article on examiner.com was posted on r/news and has since made its way to the third spot on the subreddit, gathering more than 900 comments.

The top comment in this thread was from amranu1 who messaged with r/news moderators numerous times before they approved his link to the examiner.

“Eventually bipolarbear0 agreed to approve this article after over half a day attempting to get something on this subreddit to do with these slides,” amranu1 wrote. “Another interesting thing uncovered during this saga, is that r/news also censors domains in a similar way to r/politics. It's pretty sad how heavily censored the front page of reddit appears to be.”

The user referenced a previous post from bipolarbear0 breaking down the six different r/news rules that have gotten domains banned from the forum:

Opinion/Analysis. This section includes domains such as Alternet, DemandProgress, and OpposingViews - basically any domain which predominantly purports misleading or analytic content, or opinionated content (such as op-eds), or content which intends to promote one cause over another. /r/news is for strictly factual news reporting, and as such opinion posts and analysis posts are removed.

Not news. This section includes domains such as change.org, facebook.com and kickstarter.com. While these may be mostly self-evident, the section is added to filter out any non-news stories, something which to an extent goes hand in hand with our limitation on opinion and advocacy posts as described above.

Satire. The reasoning behind the filtering of these domains is pretty self-evident.

Unreliable source. Basically any source which has proven to be highly unreliable or misleading. Included are a few conspiracy domains, as well as any other unreliable outlet - like self-reporting services or personal blogs.

Rebloggers. Basically any domain which engages heavily/solely in the copying and pasting of other journalists' work in an attempt to pass it off as their own.

Spam. Almost entirely consisting of domains which are submitted by the spammers which you'll sometimes see plaguing the 'new' queue at night in the United States, with titles like "bus service Delhi" or "best SEO marketing".

Fellow r/news mod nickwashere09 supported the removals. He told me that the story was better suited for r/politics or r/newsrebooted.

“It's all hype and distorted by partisanship. It's not a news story and doesn't belong in /r/news,” nickwashere09 told me. “I stood beside [fellow r/news moderator douglasmacarthur] and the rest when RT was banned, and I'll continue to do the same now. I did not accept the mod position to allow the board to become worse.

“We are the official news board of the Front Page of the Internet. We have rules.”

The ban nickwashere09 is referring to happened in August, when douglasmacarthur banned RT.com, a Russian news network formerly known as Russia Today, which harbors a clear anti-American bias, from r/news. The reason: vote manipulation and spamming.

“One example is plain domain frequency," dougalsmacarthur stated. "The rule of thumb is 10 percent. If you submit a lot, and the proportion coming from a certain domain is way higher than that, you're probably a spammer. If there's a lot of users doing that a lot for one domain, you should investigate further to see if it's people working for that domain."

The move sent off shockwaves across Reddit. The community called for douglasmacarthur to be removed from his position and falsely accused him of stealing $8,000 in funds raised for a Restore the Fourth protest against NSA surveillance.

"The two front-page articles that have made up RT's response have amounted to posting screenshots of Internet comments flaming me or gossiping about me—much of it on topics completely irrelevant to this—as well as linking directly to my profile, which has led to threats and harassment," Douglasmacarthur said.

On Sept. 1, RT.com fired back against the ban. The news organization published a screengrab of a conversation between r/news moderator BipolarBear0 and former Restore the Fourth member Michael Reed. The mod stated RT.com had been shut out "simply because it’s Kremlin." This is something douglasmacarthur denied.

In the end, dougalsmacarthur did not give into to the community’s demands; RT.com remains banned. This will likely be the case regarding Greenwald’s article, nickwashere09 added.

“Do I think the outrage warrants an exception? Hell no,” he said. “This board will not bend its will to ideologues who proclaim their ‘right’ to post whatever they want, wherever they want. This is no more different that posting sports scores to /r/gaming.”

Update: Moderator BipolarBear0 responded to the Daily Dot to add that Greenwald's original story was removed because "it breaks our preexisting rules as to analysis and opinion."

BipolarBear0 also weighed in on the argument that the removal of the story was an act of censorship:

We have a very specific set of rules which are written to enforce a very specific moderation philosophy: Quality content, nonbias, objectivity and factuality. All of our rules cater to that philosophy, and those rules don't take into account the content of a story - only how the story is presented. That's why from the very beginning I told people that once an objective and strictly factual article on the documents was written, it'd be allowed in /r/news. And as it turns out, it has.

It's not about some fantastical concept of "censorship", and it's certainly has nothing to do with the story itself. It's simply because the Firstlook article violates our rules barring analysis and opinion. That's why I'm so confused as to why this entire issue seems to be focusing on "censorship". It has nothing to do with censorship, and in fact that concept has no semblance of reality whatsoever.

A more reasonable criticism would perhaps relate to the effectiveness of /r/news' existing ruleset. Indeed, there is an argument to be made that perhaps the rules of /r/news barring analysis should be opened up to allow stories depending on context and importance.