Harold Ramis was a master of subversive comedy. But the politics of "Caddyshack" and rude gestures have backfired 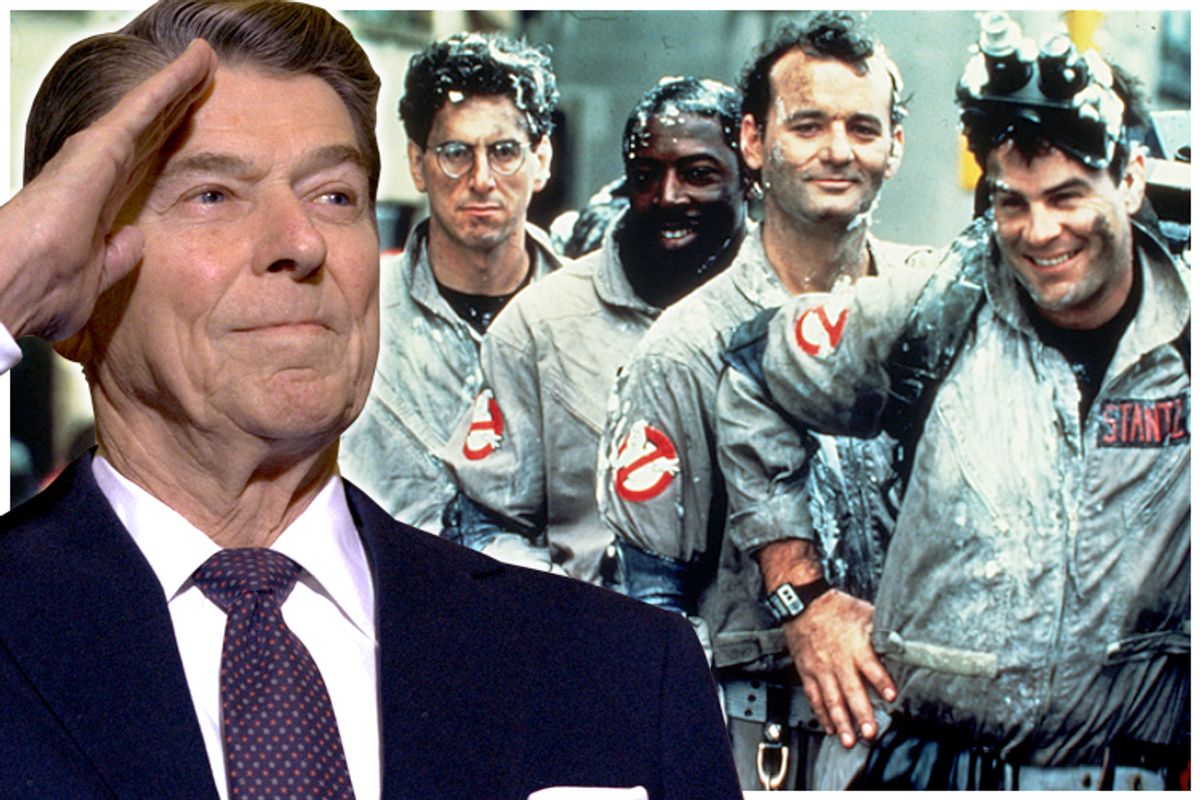 I am going to start with three beloved movies of my childhood, and end with a suggestion of why liberals will probably never be able to come to grips with what they winningly call “inequality.” The three movies I have in mind—"National Lampoon’s Animal House," "Caddyshack," and "Ghostbusters"--were all written or directed, in whole or in part, by the great Harold Ramis, who died last week, and whose work was eulogized by President Obama as follows:

When we watched his movies . . . we didn’t just laugh until it hurt. We questioned authority. We identified with the outsider. We rooted for the underdog. And, through it all, we never lost our faith in happy endings.

That seems about right, doesn’t it? Each of the films I mentioned features some prudish or strait-laced patriarch who is spectacularly humiliated by a band of slobs or misfits or smart alecks. With their dick jokes and cruel insults, these movies represented, collectively, the righteous rising-up of a generation determined to get justice for the little guy. That’s why a group of prominent Democrats showed up at Ramis’ funeral. It’s why articles about Ramis’ movies routinely speak of their liberating power.

So, the political equation is obvious, right? We of the left own the imagery of subversion and outsiderness. It’s ours. Every time a stupid old white guy gets humiliated in a TV commercial for choosing Brand X, we know it’s because the people at Brand Y secretly support universal health insurance and a nice little pop in the minimum wage. Right?

Start with the first really great movie Ramis had a hand in writing, "National Lampoon’s Animal House." Watching it again today, I didn’t think so much of righteous defiance, or underdogs and outsiders; I thought of Wall Street. This particular iteration of Ramis’ martinet vs. slob theme pits—as everyone knows—a prissy, militaristic college fraternity against a fraternity where the boys like pleasure, which is to say, where they drink beer and throw parties and actually enjoy getting laid. If this basic formula doesn’t strike you as particularly rebellious or even remarkable, that’s because it isn’t: in its simple anarchic assertion of appetite, it’s the philosophy of the people who rule us. Everyone is a fraud in this world; learning is a joke; sex objects are easily conned; Kennedy-style idealism is strictly for suckers; and in one telling moment, fratboy 1 remarks to fratboy 2, who is crying over the trashing of his borrowed automobile by fratboy 1 and company, “You fucked up. You trusted us.” What popped into my mind when I heard that line was that other great triumph of the boomer generation: the time-bomb investments of 2008; Goldman Sachs peddling its “shitty deals” to the naive and the credulous.

Drink, take and lie: translate it into Latin and it could be the motto of the One Percent. It is no coincidence that P. J. O’Rourke, who was editor of National Lampoon when "Animal House" was made and is currently a wisecracking critic of liberalism at the Cato Institute, recently declared that the release of the movie in 1978 marked the moment when his generation “took over” and started to make the world “better.” (That O’Rourke chose to write this for the American Association of Retired Persons is a particularly poignant detail.) It is also no coincidence that the fraternity at Dartmouth which served as one of the models for "Animal House" has of late become a kind of pipeline into the investment-banking industry, nor should it surprise anyone that Wall Street is home to a secret Animal House-style fraternity of its own, a place where the anarchic captains of finance come together to slurp likker and howl their admiration for their beau ideal: the self-maximizing asshole . . . who got bad grades in college.

The second of the Ramis comedies eulogized by Obama was the 1980 cult classic "Caddyshack," which took on the great movie theme of the Seventies—class antagonism—over a game of golf. The martinet this time is a country-club grandee, depicted by veteran blowhard Ted Knight; the slob confronting him is a real-estate developer of hilariously garish taste played by Rodney Dangerfield; between them stands the American worker in all his nobility—meaning, specifically, a teenaged caddy at the country club who must decide whether to be true to his blue-collar self or to kiss the grandee’s ass in order to go to college. The movie unfolds as a series of set pieces in which WASP prigs blow gasket after gasket upon beholding some infringement of their Prussian sensibilities—absorbing one of Dangerfield’s jokes, or seeing caddies frolicking in the pool, or hearing someone using the word “sucks,” or finding a car parked on the lawn, or picking up the saucy strains of a Journey song as it wafts across the greensward. Boom: Apoplexy! Watch the patriarchs go berserk!

And that makes for a pretty liberal film, right? I mean, who else makes fun of country club grandees except for us lefty authority-questioners?

Well, free-market conservatives do. Google the phrase “Country club Republican” and what you will find, by and large, are right-wing types using it as a synonym for “RINO”: fake Republicans who are in it for the snobbery—not out of faith in the relentless, disruptive forces of capitalism.

These same conservatives are also the most likely to understand class conflict in the way "Caddyshack" does: as a rivalry between WASP old money and differently pedigreed new money. In fact, this is one of the themes of George Gilder’s 1981 book "Wealth and Poverty," the manifesto of the “supply-side” revolution, and of countless wealth-celebrating books that followed. That’s why "Caddyshack" seems in retrospect like a piece of crypto-Reaganite social commentary. Rodney Dangerfield’s character, for example, is a clear symbol of the crude power of markets—proudly showing off one of his tasteless billboards and announcing that he only cares about the “snobatorium” country club because he wants to build condos there. The choice before the white, working-class caddy boils down to the Harvard-proud WASP snob and the earthy, joke-cracking businessman; the side he eventually chooses is the same one that millions of real-life blue-collar workers were also choosing in those confused days.

There is nothing “crypto” about Ramis’s 1984 hit, "Ghostbusters": Its Reaganism is fully developed, as numerous critics have pointed out. Here the martinet is none other than a troublemaking EPA bureaucrat; the righteous, rule-breaking slobs are small businessmen—ghost-hunting businessmen, that is, who have launched themselves deliriously into the world of entrepreneurship. Eventually, after the buffoon from the EPA gets needlessly into the businessmen’s mix and blunders the world into catastrophe, the forces of order find they must outsource public safety itself to the hired ghost-guns because government can’t do the job on its own.

Both Reagan and his closest advisers were transfixed by the film, Sidney Blumenthal tells us; "Ghostbusters" fit nicely into their idea of an America guided by “fantasy and myth.” And while the film itself piled up its stupendous box-office returns in that summer of ‘84, Jack Abramoff and his College Republican pals got together a troupe of “Fritzbusters” to warm up the crowds at Republican events, mocking Democratic presidential candidate “Fritz” Mondale with an offensive take-off on the catchy "Ghostbusters" theme song. And why not? What Mondale was promising—yes, promising—was to raise taxes, balance the budget, get responsible, and close down the party. What a Niedermeyer.

Harold Ramis was a sort of poet of the rude gesture, of the symbolic humiliation. Our reaction to his work, both now and when it was fresh, is almost mechanical: We see the square on the screen get shamed, and our mind shouts liberation. It is almost Pavlovian. Our culture-masters have been gleefully triggering this kind of reaction for nearly fifty years now—since the rude gesture first became a national pastime during the 1960s—and in that time the affluent, middle-class society that produced the Boomer generation has pretty much gone the way of the family farmer.

These two developments are not unconnected. One small reason for the big economic change, I think, is the confusion engendered by the cultural change. The kind of liberation the rude gesture brings has turned out to be not that liberating after all, but along the way it has crowded out previous ideas of what liberation meant—ideas that had to with equality, with work, with ownership. And still our love of simple, unadorned defiance expands. It is everywhere today. Everyone believes that they’re standing up against unjust authority of some imaginary kind or another—even those whose ultimate aim is obviously to establish an unjust authority of their own. Their terms for it are slightly different than the ones in "Animal House"—they talk about the liberal elite, the statists, the social engineers, the “ruling class.” But they’re all acting out the same old script. The Tea Party movement believes it’s resisting the arrogant liberal know-it-alls. So did Andrew Breitbart, in his brief career as a dealer in pranks and contumely. So do the people who proposed that abominable gay marriage discrimination law in Arizona. Hell, so do the pitiful billionaires of Wall Street—even they think they’re standing bravely for Ayn Rand’s downtrodden job creators.

Maybe the day will come when we finally wake up and understand that insults don’t always set us free. But until that happens, my liberal friends, don’t ask for whom the bird flips: the bird flips for thee.