"Boy, Snow, Bird": The (much) darker side of Snow White 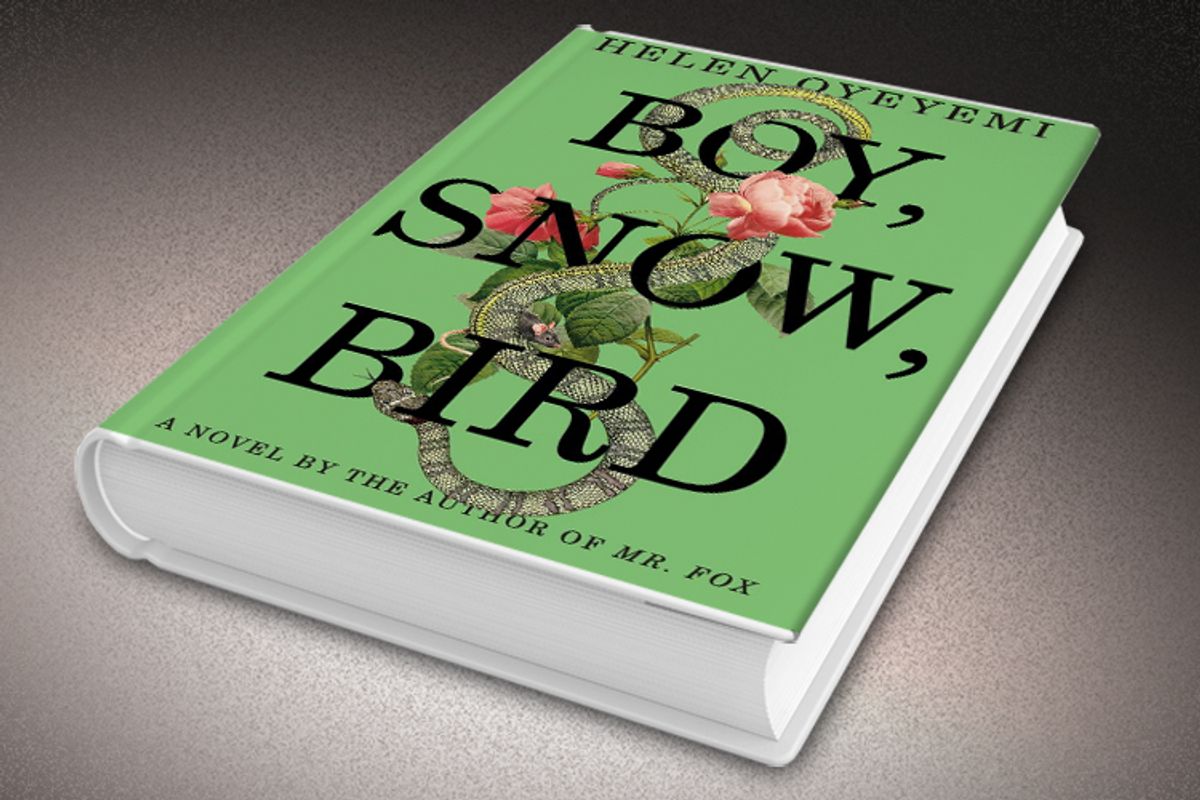 Helen Oyeyemi's new novel, "Boy, Snow, Bird," begins with a cool blonde arriving in a small town. The blonde is named Boy Novak, and she may look like Grace Kelly, but her personality is closer to that of the old film noir goddess Veronica Lake -- skeptical, street smart and tough. She got that way on the Lower East Side of Manhattan, where she grew up motherless and regularly beaten by her father, an ogre with the strangely storybook profession of rat catcher. When Boy's father's violence verges on the life threatening, she hops a bus for the furthest affordable point north: a town called Flax Hill in some unnamed New England state.

Oyeyemi, a Nigerian-British prodigy who published her first novel, "Icarus Girl," at age 18, is the literary heir of the late, great Angela Carter, a writer whose fiction glides from swirling archetype and folklore to the wised-up observations of a thoroughly modern womanhood. Fairy tales are often Oyeyemi's primary source, but "Boy, Snow, Bird" also drinks deeply from the well of mid-20th-century Hollywood movies -- and really, is there that much difference between the two?

The 1950s Flax Hill that Boy flees to is a glossy, gritless setting populated by snooty society ladies and the boarding-house girls who try to land their sons while making ends meet by working coat check. There's even a swank cocktail party, staffed entirely by blondes (including the blasé Boy), held on a yacht. Boy's best friend is a brash reporter who could be played by Rosalind Russell. In time, Boy marries Arturo Whitman, a widowed history professor-turned-jeweler and scion of a prominent family, but only at the end of one of those long jousting courtships perfected in the screwball comedies of the 1930s. "You feel you've seen a hundred of me," Boy zings Arturo, channeling Ginger Rogers. "You know how my tiny mind works. But maybe it goes both ways."

The film that "Boy, Snow, Bird" most strongly evokes, however, is the 1959 Douglas Sirk movie, "Imitation of Life," probably the most unsettling Hollywood movie ever made about race before the 1970s. With their rich visual sheen and stylized melodrama, Sirk's films are, almost deliriously, about surfaces, and so is Oyeyemi's novel -- except for the deliriously part. She prefers the prowling, bloody imagination of myth. Some reviewers have tried to withhold a mid-book revelation from "Boy, Snow, Bird," but the novel only really coalesces once you know it, and besides, the book's publisher prints the "spoiler" right in the flap copy. If you've seen "Imitation of Life" you've already guessed what it is, but if not, I promise that the novel is far more enjoyable if you know from the start that Arturo's family are light-skinned African-Americans who came to Flax Hill aiming to pass as white.

Boy doesn't find this out, however, until she gives birth to Bird, a daughter who is unquestionably (to use the language of the novel's characters) "colored." Boy's response brings another allusion into play: Snow White. Boy sends Arturo's daughter by his first wife, Snow, off to live with her aunt, a woman who was herself sent to live with relatives as a child because her skin color betrayed the Whitman family's secret. So Boy, like the wicked queen of the fairy tale, exiles her stepdaughter for being too fair; the twist is that she does it not out of personal vanity (Boy doesn't seem to care much about her looks), but to protect Bird, who will, by comparison, always seem the inferior, less-lovable child in her in-laws' eyes.

Boy narrates the first and third parts of the novel, but Bird gets to tell the second. She's an uncanny child who talks to spiders and believes that at times she doesn't cast a reflection in mirrors. At 13, she's had a much happier childhood than her mother's, but they sound a lot alike: "School is one long illness with symptoms that switch every five minutes so you think it's getting better or worse." Bird believes her problem with mirrors is caused by an unknown "enemy," but who it could be is a puzzle. She knows she has a half-sister she's never met, but she's not sure why they're separated.

A fairy tale never leaves its audience in any doubt about who is evil, but identifying the sources of the malevolence that tinges her days has Bird stumped. When she finds a cache of letters from Snow, a child Boy once loved, in her mother's jewel box -- forlorn missives begging to be allowed to come home, or at least to be told what she's done wrong -- Bird begins to wonder if her mother might be the evil one. Her mother, on the other hand, insists that it's beautiful and seemingly perfect Snow: "She's a pretty convincing replica of an all-around sweetie pie, but ... there's something about her that doesn't add up. Something almost like a smell, like milk that's spoiled."

This narrative proceeds with an odd, stuttering momentum. Oyeyemi, for all her allegiance to the oldest forms of storytelling, constructs cul-de-sacs and eddies in her own plots, patches of unexpected languor or murkiness, and at a few points the reader will have to get out and push. Her previous novel, "Mr Fox," sustained a more consistent spell, perhaps because she felt less obliged to break it with injections of history. Names like Emmett Till and Ida B. Wells feel like messages from a different world than the dreamy, timeless idyll of Flax Hill, but they nevertheless need to be spoken.

Oyeyemi's prose, a perfectly balanced blend of the lush and the vernacular, cinches these disparate elements together. In perhaps the most dazzling portion of the novel, Snow and Bird exchange letters and stories behind their parents' backs. Snow asks Bird to explain her many surreal experiences, and Bird obliges her with what must surely be Oyeyemi's own inimitable credo: "When something catches your attention just keep your attention on it, stick with it 'til the end, and somewhere along the line there'll be weirdness ... I've never tried to explain it to anyone before, but what I mean to say is that a whole lot of technically impossible things are always trying to happen to us, appear to us, talk to us, show us pictures, or just say hi, and you can't pay attention to all of it, so I just pick the nearest technically impossible thing and I let it happen."