Lupita Nyong'o vs. Matthew McConaughey: How his Oscar speech got it so wrong

The star, who played an AIDS patient, was focused on his own greatness 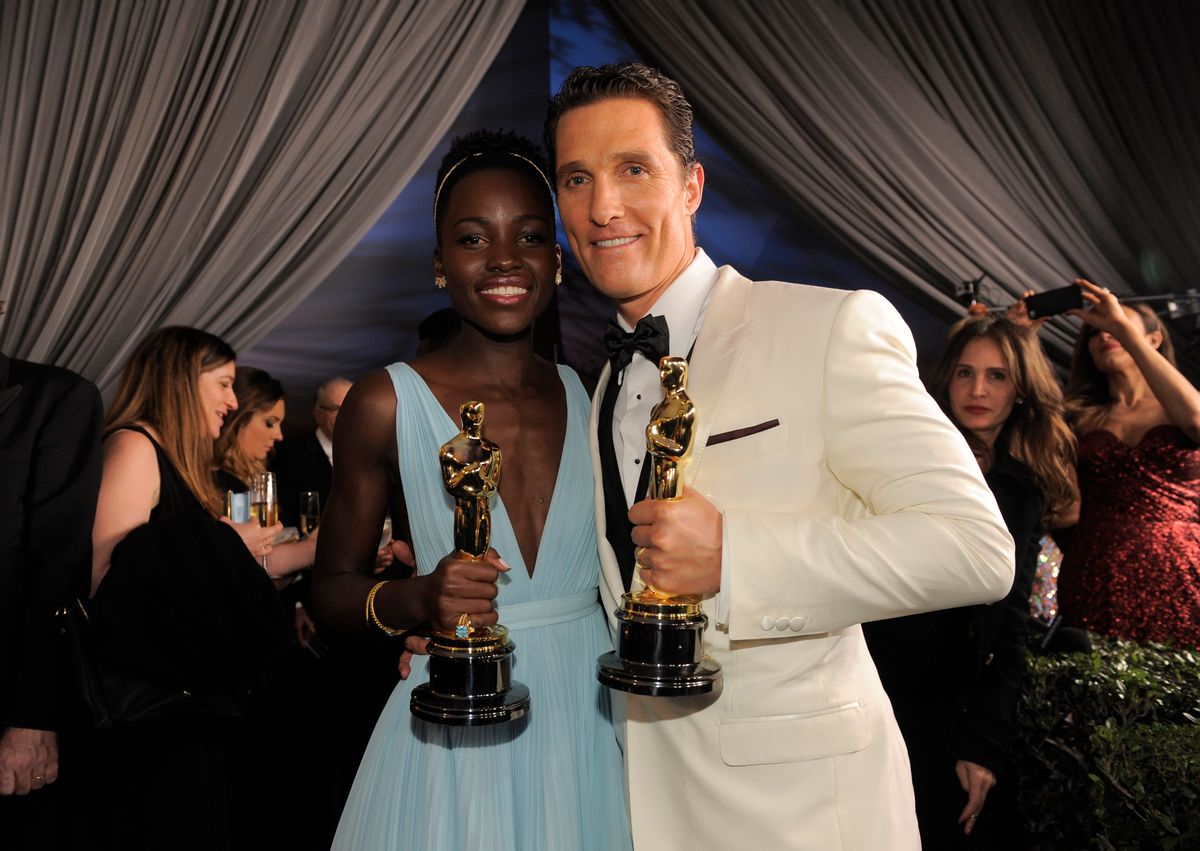 Lupita Nyong'o, winner of the award for best actress in a supporting role for "12 Years a Slave" and Matthew McConaughey winner of the award for best actor for his role in the "Dallas Buyers Club" attend the Governors Ball after the Oscars on Sunday, March 2, 2014, at the Dolby Theatre in Los Angeles. (Photo by Chris Pizzello/Invision/AP) (Chris Pizzello/invision/ap)
--

When you're Matthew McConaughey, you think a lot about what it means to be Matthew McConaughey. We've learned that much in the actor's march through awards season, during which he's made use of catchphrases and astrology (Cate Blanchett mocked his talking about "Neptune" at the Screen Actors Guild Awards). He's heavily reliant on a blithe, loose persona as a guy's guy and a fellow with his head in the clouds.

McConaughey's acceptance speech for the best actor Oscar, though, revealed the narcissism at the center of the McConaughey project. The star had just won an award for playing an AIDS patient who fights for a cure and eventually dies, and he mentioned AIDS not once, though he described how his present-day self was the role model for his past self. The people whose real-life lives and deaths McConaughey plumbs for art are less important, here, than McConaughey himself.

It should be noted that there is not a competition between AIDS and slavery in terms of suffering. But the difference between best supporting actress winner Lupita Nyong'o acknowledging that the sadness of her "12 Years a Slave" character led her to acclaim and McConaughey's celebration of himself is the difference between a humble and thoughtful actress and a star who's solely in it for acclaim. McConaughey went on at length about how he was his own hero -- he couldn't have spared 10 seconds to acknowledge the heroism of people like the man he played?

McConaughey ended his speech with catchphrases from "Dazed and Confused." But he wasn't, strictly speaking, accepting an Oscar for that '90s cult classic; he was accepting an Oscar for a movie about a destructive and awful disease. There are no hard-and-fast rules here, but an actor portraying a character caught up in a historical tragedy ought perhaps to acknowledge the tragedy was real -- if only to note that his performance was given additional gravitas by real-life circumstances. In McConaughey's mind, surely, "Dallas Buyers Club" is potent and sad simply because of the quality of his own performance. But then, this is a fellow who thinks his lines from a 20-year-old movie deserve to be iconic; his perspective may be skewed.