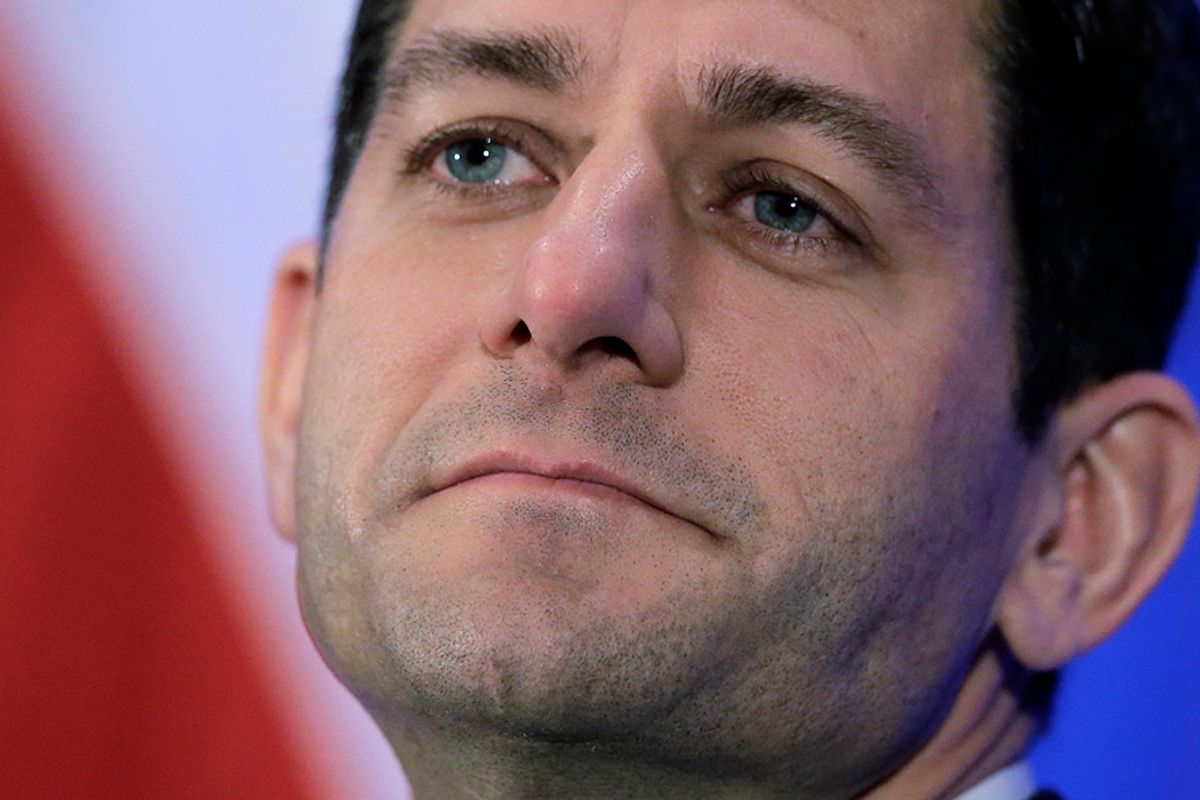 McKay Coppins already told us that there’s a new Paul Ryan who really cares about poverty and the poor. Now Robert Costa has the details on the newest new Paul Ryan, who just released a report on poverty that is 204 pages long, which proves that he really cares about the poor, because when was the last time a Republican wrote that many words and sentences about them?

Now, Ryan’s plan does one positive thing: It makes Sen. Marco Rubio look kind of lazy and insincere. Because Rubio gave a much-heralded speech on the anniversary of Lyndon Johnson's declaring a War on Poverty, but it was only a few thousand words, it wasn’t 204 pages, and since then, he basically dropped the issue. Ryan says his report will provide the basis of his next budget. But the basic Ryan-Rubio message is the same warmed-over Reaganism: We fought a war on poverty and poverty won, so let's give up.

But seriously, how many times are we going to be told that there's a "new" Paul Ryan who really, really, really cares about the poor – and whose budget proposals consistently slash programs designed to help them. All that’s different about Ryan’s approach now is he’s telling the poor that cutting their programs is good for them, because it will free them from “the poverty trap.”

Also, how many generations of Republicans are going to rely on Bob Woodson's self-promotion? Like Coppins, Costa tells us Ryan is looking to Woodson’s Center for Neighborhood Enterprise for new ideas about fighting poverty. But it’s been generations now that Woodson has been reassuring Republicans, with zero evidence, that unfettered capitalism can heal the inner city. Can't they even trouble themselves to find a new Bob Woodson?

In fact, Think Progress found that buried in Ryan's report, beneath the dark warnings about a "poverty trap," are findings that actually, even by GOP standards, a lot of anti-poverty programs are doing a lot of good. From the Veterans' Health Administration to the Earned Income Tax Credit, Ryan's report identifies at least 16 major programs that in fact help the poor and are a good bet for government. You wonder whether he even read his own report.

And in several of the areas where Ryan found fault with programs, the Fiscal Times found that the economists behind the studies Ryan cited say he misrepresented their data.

To be fair, Ryan actually makes three good points. One, he supports the once-bipartisan, now-GOP-questioned Earned Income Tax Credit, which helps low-wage families out of poverty (but even better would be if he called for a major expansion). The EITC is actually a huge part of the story behind the "47 percent" Ryan's running mate Mitt Romney slurred in 2012. Ryan doesn't acknowledge the dissonance, but his EITC support is welcome.

Ryan's second fair point is that federal anti-poverty programs are a sketchy patchwork of mostly uncoordinated initiatives that would certainly work better if anyone put time into pulling them together. But Ryan merely criticizes that patchwork in order to rip it apart, proposing to slash rather than coordinate the services that help poor people, admittedly inadequately.

Of course, the alternative to means-tested programs in other industrialized nations is universal programs that essentially set a floor for income, nutrition and health below which families can’t drop. Social Security and Medicare are rare American examples of universal program – ones that Ryan has repeatedly tried to gut (while most Republicans and even some conservative Democrats endorse "means testing" them). A guaranteed family income and a genuine national health insurance program could eliminate means-tested programs like Temporary Assistance for Needy Families and Medicaid – but Ryan and his GOP allies (and lots of Republicans) would never consider those notions.

Nor will they consider the other guaranteed anti-poverty program: a hike in the minimum wage. Raising the minimum wage to $10.10 an hour would lift almost a million Americans out of poverty immediately – but Ryan’s party is opposed to it. Indeed, more Republicans are coming out every day saying there should be no minimum wage at all.

There is, indeed, a poverty trap in the U.S., and the media fall into it again and again: taking seriously the warmed over Reaganism of conservatives like Paul Ryan, and pretending there’s something in it that will help the poor.