From Sarah Palin to Lindsey Graham, the right's posture on Russia has revealed the movement's biggest flaws 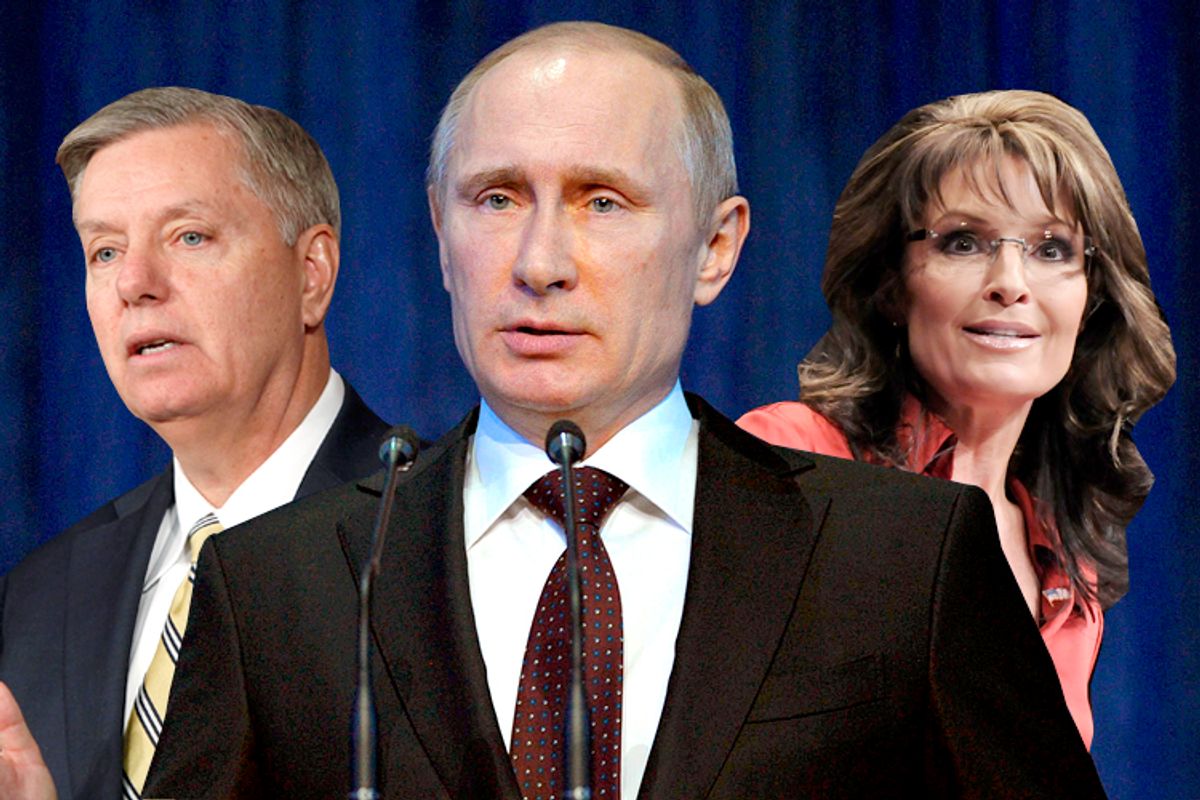 I'd intended to let this go, because it's so incredibly derpy and I don't really want to jump waist-deep into derp, but now I see that jumping waist-deep into derp is the price of entry into any argument about Russia's invasion of Ukraine, so here we go.

When I noticed yesterday that Sean Hannity had invited special guest Sarah Palin on to his show to sound off about developments in Ukraine, I offhandedly mocked both of them on Twitter. Afer all, what could be less informative than two lightweight reactionaries deceiving themselves and their viewers about why developments in a part of the world where U.S. interests are relatively minor has everything to do with Barack Obama's failed presidency.

What I didn't know was that, in anticipation of her appearance, right-wing Twitter had already drenched itself in onanistic emissions, because Palin claimed to have predicted the invasion as a vice-presidential candidate back in 2008.

“After the Russian Army invaded the nation of Georgia," Palin explained. "Sen. Obama’s reaction was one of indecision and moral equivalence, the kind of response that would only encourage Russia’s Putin to invade Ukraine next."

But that's only knee-high levels of derp. The rest of it comes from other Republicans, who reverse engineered the crisis and miraculously found that its catalysts all happen to substantiate their previously held obsessions and grievances -- and from a handful of journalists #slatepitching or getting taken in by this spin.

For Palin it's Obama's moral equivalence, but for Sen. Lindsey Graham, R-S.C., it's Benghazi; for Rudy Giuliani it's that Obama lacks Putin's impressive testicular fortitude (see Syria), and for much of the GOP, it's Obama's inability to understand geopolitics as well as that foreign policy redoubt Mitt Romney.

Most of this is just cheap point scoring. Having slowly realized they can't fault Obama's response to Russia's invasion, they've retreated instead to attributing the whole thing to one or another of Obama's perceived, but unrelated weaknesses or failures.

To swallow any of this you need to believe that Putin would've begged off but for some unrelated historical curiosity that by pure coincidence happens to be the subject of some long-standing GOP obsession or political attack.

But it also requires treating Russia's decision to invade as one undertaken specifically to weaken or embarrass the U.S. or endanger its interests. In other words, to conceding Romney's much-mocked argument that Russia is the United States' top geopolitical foe. I understand why Republicans would make that argument now. "I told you so's" make great politics. But a few opinion writers have fallen for it too.

It's still wrong. For those who'd happily forgotten, here's what Romney said in March 2012.

Well, I'm saying in terms of a geopolitical opponent, the nation that lines up with the world's worst actors. Of course, the greatest threat that the world faces is a nuclear Iran. A nuclear North Korea is already troubling enough.

The trick here is that Romney decided to define geopolitical antagonism, somewhat arbitrarily and narrowly, as being a menace on the United Nations Security Council. It's not that Russia isn't a menace, it's that Russia's broader influence is significantly more limited than, for instance, China's, which Romney more or less dismissed as an afterthought. And in a way, the fact that this supposedly great adversary keeps making a menace of itself in bordering, former Soviet republics more or less demonstrates the opposite of what the revisionists think it proves.