On the new reality show "Lindsay," the actress's dramas are dragged into the light. Is this what she needs? 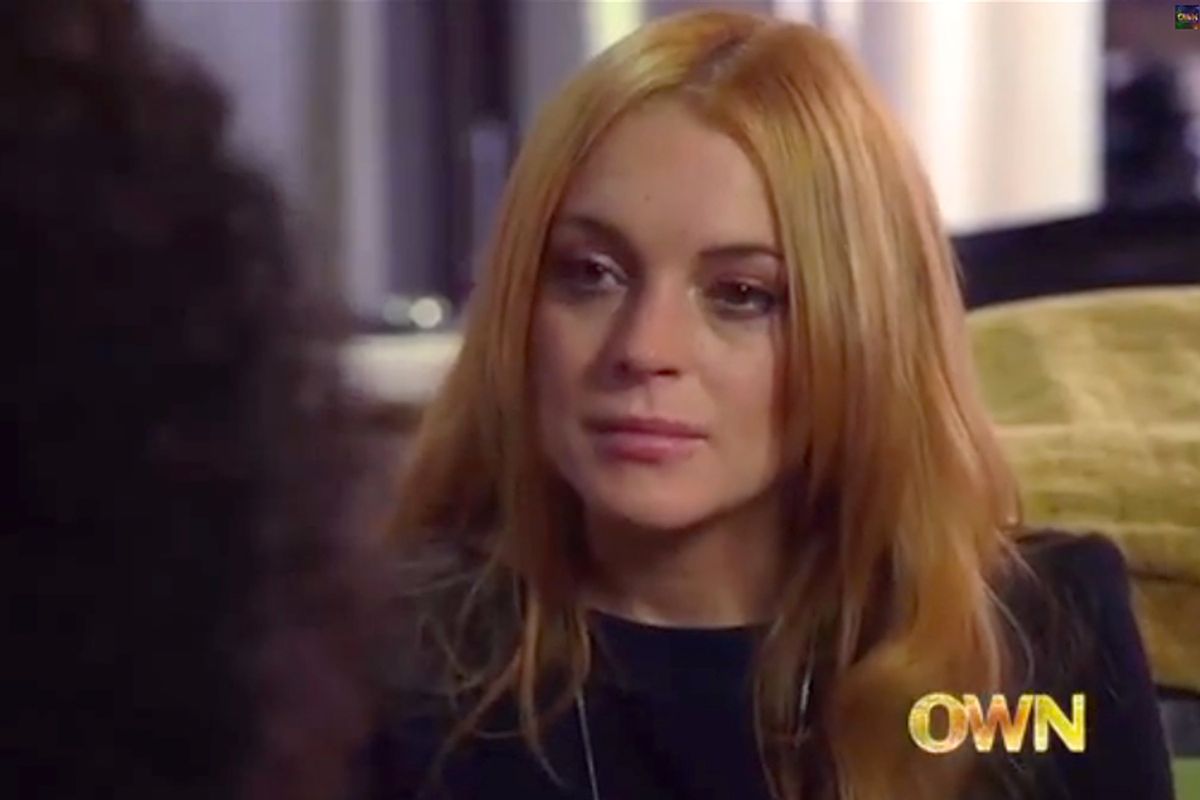 It's the oldest trick in the book: Any reality show can have its purpose elevated by claiming to be a "documentary series."

"Survivor" has long marketed itself as a probing look inside human behavior in extreme conditions; so too has "Big Brother," of all things. "The Real World" claimed to be a sociological experiment long after the only experimentation in the well-furnished homes was with chemicals. And now, the queen of TV talk has gotten in on the act with the Oprah Winfrey Network's new reality show "Lindsay," whose trailer debuted last night.

The series looks at the present-day life of Lindsay Lohan -- the actress and singer who, a startling 10 years ago, went from fame as a promising young comic actress to fame as a tabloid punching-bag with monstrous stage parents and ravenous appetites. Lohan has been "in and out of rehab," as the cliché goes, most recently as the result of a court order. I'm no doctor, but this show would seem to be the worst thing Lohan could get, not least because it's inviting me, the audience, and Winfrey all to act as though we were Lohan's physicians.

Lohan has, on her second album, detailed all manner of problems with her father, against whom Lohan's mother, Dina, has lodged allegations of domestic abuse. For his part, Michael Lohan has consistently leaked to the tabloids apparently against his daughter's will. Michael and Dina Lohan both appear with their daughter in the trailer for "Lindsay," shedding further light upon an unhappy situation that somehow hasn't resolved itself through 10 years of publicity, and that neither party has ever considered attempting to resolve outside the cameras' glare -- they haven't had to try.

Oprah Winfrey is just the latest media figure to capitalize on the travails of the Lohan family, and the trailer for "Lindsay" would seem to make it clear that she's really going for it. While what actually happened during the taping of the series won't be revealed until it airs, the marketing materials for the show provide a strong sense not merely of the content but on how willing Winfrey is to rely on expectations of Lohan's behavior to make a buck. There's a sense built into the editing that Lohan is perpetually disappointing and dismaying the crew. She delays filming because she's been locked out of her apartment, a director tells the camera; whether Lohan was lying or telling the truth and just how substantial was the delay is not divulged to us yet. It's the hint of Lohanesque chaos that's meant to entice us to watch. Lohan's sober coach is asked on camera if the actress is staying sober, and says, "You know, uh," before the camera cuts away. If he goes on to say she is, this is the worst sort of deceptive editing; if he says she isn't -- well, then, is this something a right-thinking person ought to be watching?

Before veering into sanctimony entirely, it's worth noting that Lohan is free to do whatever she wants; she made a transaction with Winfrey to broadcast her recovery, and can't be entirely unaware of what she's gotten herself into. But Winfrey occupies a special place in our culture, one she hasn't earned, that frames her as a sort of ultimate arbiter of wisdom and truth, though anyone who watched Winfrey's old daily talk show must be able to see through that, at least a little. Winfrey's bookers and producers were very, very good at finding sad cases to put on TV; Winfrey was very, very good at nodding sagely and making pronouncements. Winfrey made her reputation with her relationships with celebrities and authors; she made her bucks with episodes like the "alcoholic mom," who recorded a video diary of her spending all day drinking before the kids got home. She's finally merged the two strands of Oprahism -- celebrity culture and frank, prurient interest in people at their low points -- in her new relationship with Lohan, and has, as usual, framed the whole thing as a pursuit of higher truth.

"My truth is, that I really do want you to win. I really do," Winfrey tells Lohan at the end of the trailer. "If that isn't what you want, I'm OK with that." But for Winfrey, Lohan's "winning" is contingent upon Lohan fulfilling a contract to film episodes of a reality show for the Oprah Winfrey Network. Her truth is that she's annoyed that an employee's personal problems have gotten in the way of producing a TV show that's sure to get good ratings, and she's going to use it as an opportunity to create some drama that'll be enticing in a trailer.

For her part, Lohan appears clear-eyed in her resolve to get better and about the particular challenges standing in her way -- though the fact that I'm tempted to evaluate her says volumes about the faux-therapeutic, truly voracious media climate Winfrey benefits from every day. "I don't want them following me to an AA meeting," Lohan says of the paparazzi. But because Winfrey's framed herself as the judge of what is Health, what is Reason, what is Good and what is Bad, her cameras can follow Lohan everywhere, or else Winfrey will take away whatever assistance she's proffering. The paparazzi's cameras and Winfrey's both seek the same thing.