Fallon's show can get frenetic, but Letterman knows how to keep chaos contained 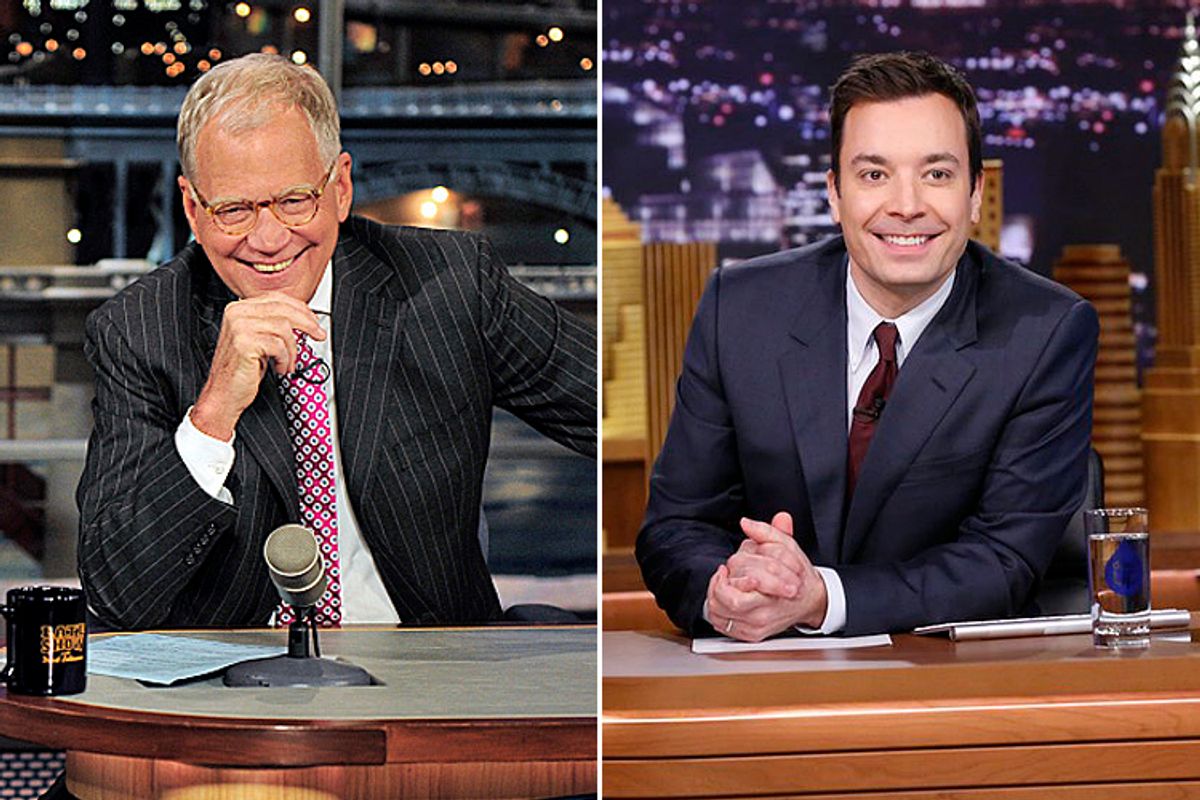 Jimmy Fallon brings youth and undeniable, frenetic energy to late night television. First on "Late Night," now on "The Tonight Show," he rolls with the Roots, a musical troupe capable of backing the hottest performers at any moment. He utilizes social media better than any of his talk show predecessors and provides the Internet with a steady stream of viral fodder. His hip friends are myriad. He regularly engages his guests in activities that get them off the couch, giving his show the feel of some sort of game night at your friend's overzealous older brother's crib. Honestly, it can all be a little exhausting.

My most indelible late night memories are of watching David Letterman when his show followed "The Tonight Show." In the wake of Carson, his program felt unpredictable -- subversive, even -- but never raucous. Early on, I was grateful for such quiet chaos, since I was up past my bedtime praying one of my parents wouldn't storm the basement to investigate why I had not yet finished my math homework. David Letterman had Chris Elliott living underneath his stage. He would give out toast to his audience. He tossed watermelons off the roof of a building across the street from which I would eventually have my first office.

Of course, the days when Letterman's show felt like an underfunded afterthought of NBC's "pinheads" have long passed. The man's fans are legion, and his status as a legend in late night is secure. Fallon is inclusive and ingratiating -- some might even say cloying. Letterman always felt like a bit of an outsider. As that became less and less of a possibility, he ascended to a place of righteous been-there-done-that-ness. Whoever ends up being the King of Late Night, Letterman is most certainly the King of Being Over It.

Last night, I DVR'd his show -- longtime Letterman fans need sleep -- specifically to catch a performance by the band Phantogram. A year ago, I didn't know who they are. I'm not sure Dave knew even as of last night. Nevertheless, they were onstage, so his bookers know what's up. Letterman likes to keep a light load, so the only other guest was Michael Keaton. Keaton is featured in the video game-turned-movie "Need for Speed," but you probably wouldn't know that from the commercials, which focus on fast cars, explosions and much younger star Aaron Paul. Keaton's stint on the couch involved a long discussion about anesthesia and hip surgery.

None of this is to say Letterman isn't in touch. Last night, as expected, both Fallon and Letterman jabbed at Travolta's Oscar night gaffe with their respective monologues. Fallon also briefly went after crack-smoking Canadian Rob Ford. Letterman started to, as well, but then stopped once his cue card reader informed him that the joke was well past its due date.