Equation for a healthy economy: Take Wall Street and make it much smaller

Not only is Wall Street too big to fail. It's also just too damn big!

“I wish someone would give me one shred of neutral evidence that financial innovation has led to economic growth — one shred of evidence.” —Paul Volker (2009)

All of us suspect the obvious — that Wall Street not only is too big to fail, but also just too damn big. But where's our evidence? It's one thing to direct our anger at financial elites and the top one percent. It's quite another to make a factual case that Wall Street, indeed, is much too big, and therefore should be radically reduced in size. So here's some data.

1. Explosion in Financial Sector Incomes But No Rise in Economic Growth

Check out this chart: Between WWII and 1980, the wages of financial workers were the same as those who worked in non-financial industries. Then the two lines split apart with Wall Street extracting an enormous premium. Do the financiers deserve it? And how would we know if they do or don't? The answer should depend on how much value the financial sector, in fact, produces for our economy. Is there a correlation between the explosion in Wall Street incomes and economic growth? 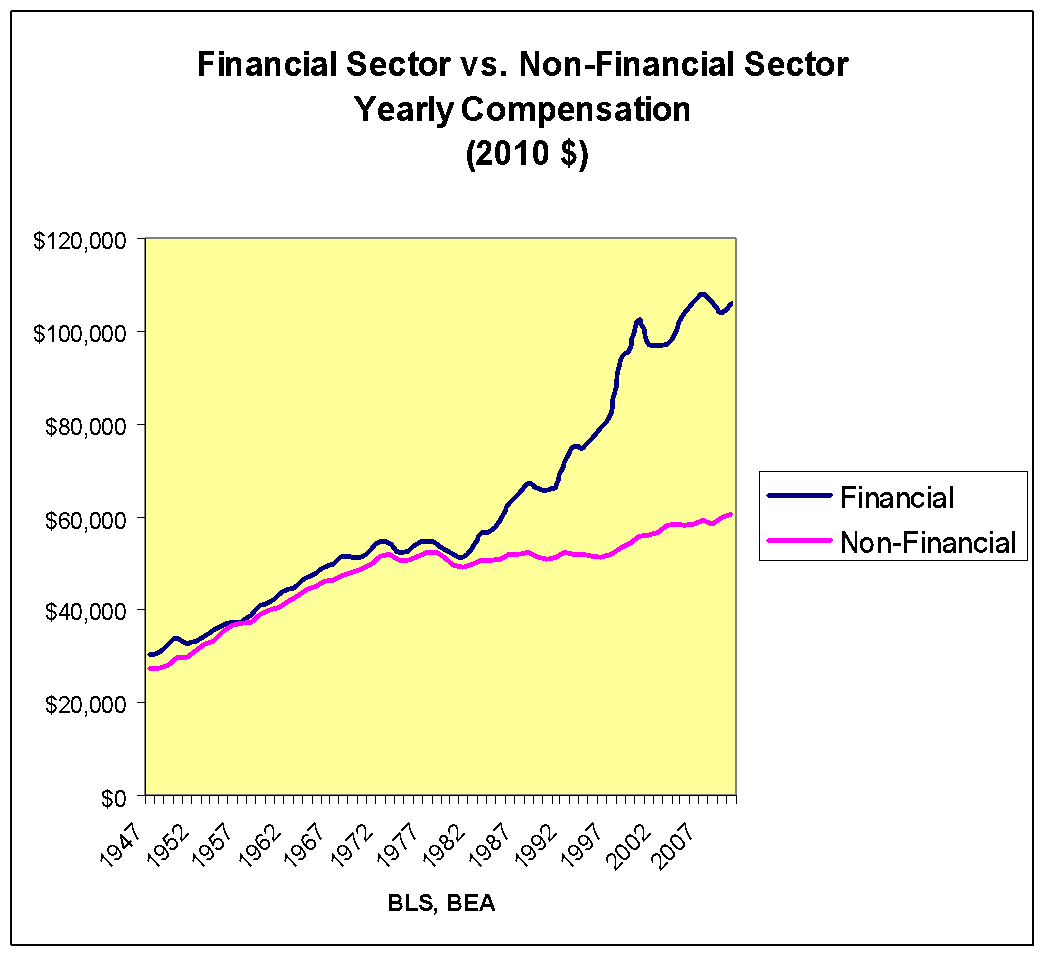 Yes, there is, but it's negative. As Wall Street wages rise, economic growth slows down.

[Source for these unemployment numbers ]

The usual suspects include globalization, technology and too much government spending on the social safety net. You know the arguments: we are falling behind the global competition; we are losing our jobs to new technology; government "entitlements" are crippling the economy; and so on.

The International Labor Organization (ILO) produced an eye-popping study concluding that the biggest factor in the decline in workers' share of income is financialization — that it accounts for almost 50 percent of the decline in labor's share (from ILO, Figure 38). 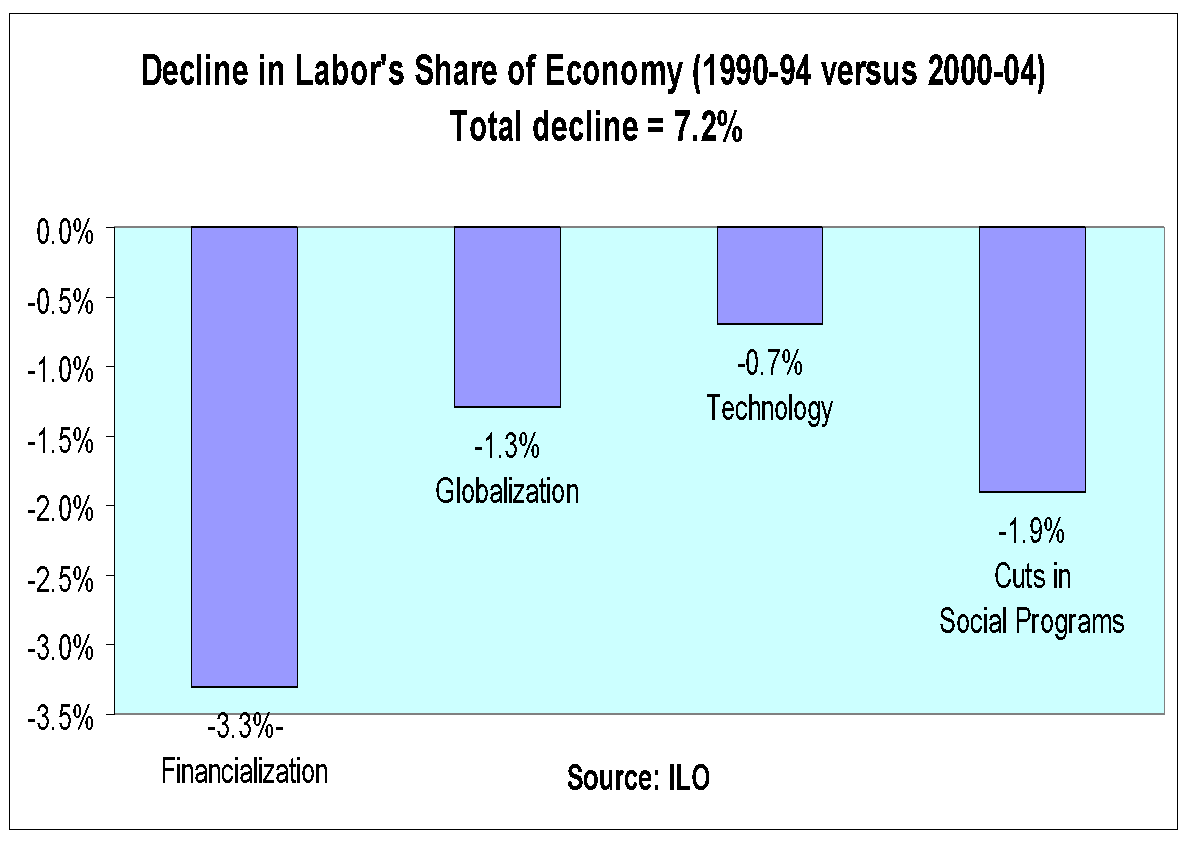 3.  Wall Street Costs Too Much

A compelling measure of financial bloat can be found in an excellent paper by economists Gerald Epstein and James Crotty. They look at the "financing gap" which "measures the extent to which different sectors of the economy depend on external finance as opposed to financing with internal savings."

So for every dollar consumers and businesses borrow, how much does Wall Street charge? More and more, which is the exact opposite of what is supposed to happen in capitalism. The rise of advanced technologies, global markets and more creative work organization should lead to a drop in price, not an increase. But not on Wall Street. If we compare the booming 1960s with the last decade, we see that Wall Street is now charging four times more for its services.

Enrigue Diaz Alvarez, using different metrics in his article, " The Rent is Too Damn High," draws a similar conclusion:

"For every dollar that our capital stock increases, FIRE [the finance, insurance and real estate sector] collects somewhere between two and four dollars! Old Soviet bureaucrats with their chauffeured Ladas and modest three-bedroom apartments never dreamed of achieving this level of parasitism."

Another way to measure Wall Street's obesity is to look at how much of its profits comes from playing the markets (or what is politely referred to a proprietary trading). The bigger Wall Street banks and investment firms know they can take risks and grab all the upside, and should they fail spectacularly, the government will find a way to cover the downside fearing an economic meltdown. So we would expect that large Wall Street firms are engaged more in casino activities than traditional financial functions (like helping clients invest their money in the real economy or helping corporations raise money for expansion).

The data compiled by Epstein and Crotty show how large Wall Street investment firms are making the bulk of their profits from casino activities:

How Big Is Too Big?

Given this data, a reasonable person might conclude that the financial sector is two to four time too large. Therefore, we could either dramatically reduce the financial sector to one quarter to one half its current size, or cut its profits, salaries and bonuses by 50 to 75 percent without harming the economy.

This also means that progressives need to be more radical in our demands if we truly wish to tame financialism.

To paraphrase Grover Norquist, our goal should be "to shrink [Wall Street] down to the size where we can drown it in the bathtub."