The actor discusses Native American representation on TV, "Game of Thrones" and playing an unlikable character 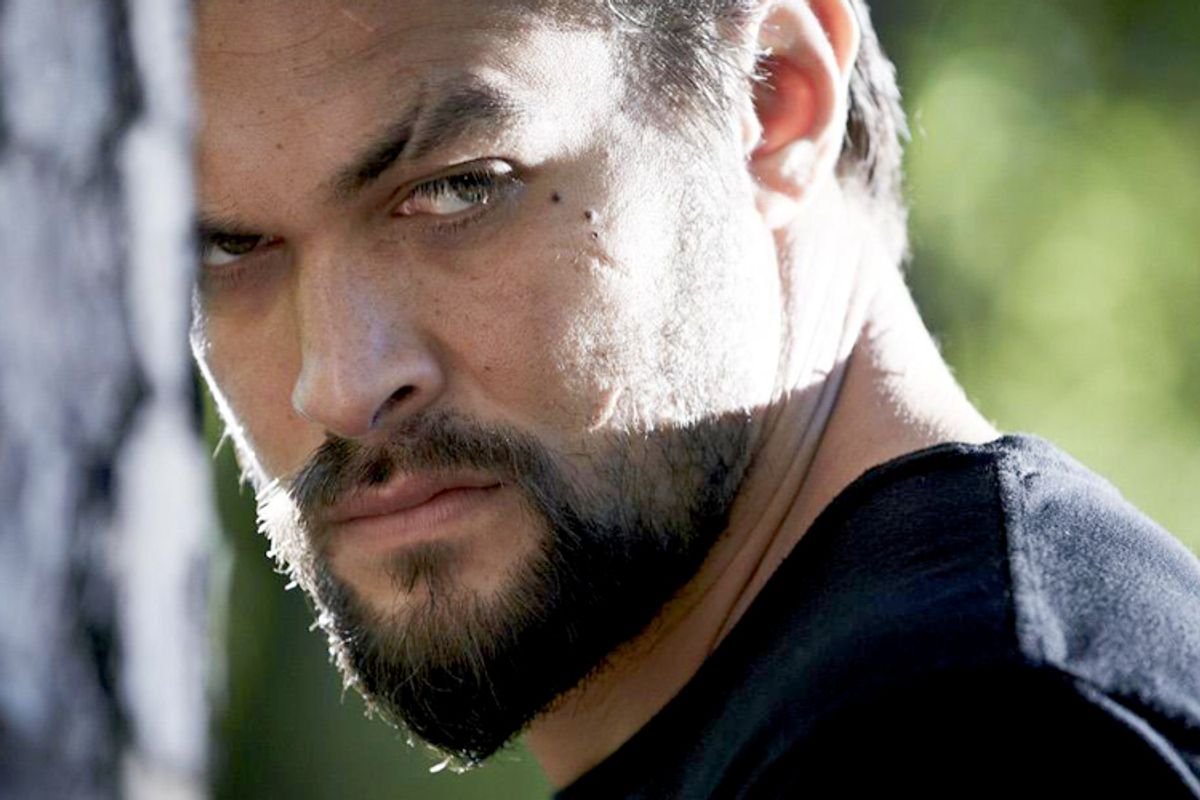 Two strangers frolic in a moonlit pool under a canopy of trees. The fun turns to roughhousing. The girl gets scared. Her boyfriend rushes to protect her, and suddenly the abusive, older man is drowning him while the girlfriend screams. Nearby, a fourth man treads water, looking on, his head halfway submerged beneath the surface. Unseen, from his neck down, this man is all muscle and menace. He could easily rise up and separate the factions, cease this struggle with two massive arms or even a sharp word. But he doesn’t – not immediately. He watches, the barest of a smile on his face, the promise of something sinister in his eyes.

The man, played by Jason Momoa, is Phillip Kopus, a drifting member of an unrecognized Native American tribe residing just outside of New York City. The scene, from last week’s premiere of Sundance TV’s new series, “The Red Road,” is a perfect encapsulation of this show’s incredible sense of foreboding. Death, regret and so much more hang over the forest where the Lenape Indians live uneasily alongside whites. Momoa carries all that weight on his massive shoulders and hides even greater secrets and pain within. I spoke with the “Game of Thrones” actor briefly about his latest vehicle.

How did you get involved with “Red Road”?

It came through my agency. I auditioned for it and had to try to convince the show runners that I was capable of playing this role. I haven’t played too many roles like this. It helped that I just finished directing my first movie; it’s called “Road to Paloma.” That really helped, I think. I played a Native American character in that; also my wife [Lisa Bonet] is in that movie with me too. So, I think it helped both of us.

“Road to Paloma” is a feature film?

It comes out in July. I wrote it with some friends and directed it, starred in it, produced it. We submitted it to the Sundance Film Festival and I think it really helped me get this job.

How do you decide between working on your own projects and something that’s such a time commitment as a television show?

I think “Red Road” offers something beautiful, which is I love the idea of doing six to 10 episodes. It’s like a six-hour movie, and you get to spend time with the characters. You only spend a couple of months working on that. You could spend the rest of your time on projects you want to write or direct. And so I’m kind of glad that I can do that and I would love to continue doing that.

I read that your mother is part Native American and your father is Native Hawaiian.

My father is Hawaiian. My mother’s [Native American ancestry] is very small; my grandmother has [Native ancestry] in her, but Mom is pretty much Irish and German decent.

What appealed to you about the part of Phillip Kopus in “Red Road”?

I played a Mojave character in “Road to Paloma.” I did the language. We did all the traditional things that represent the tribe. I liked the idea that this was a contemporary piece about a Native who is not recognized by his own tribe. He was left by his mother. He was raised by a white drug lord (Tom Sizemore). He’s just a bad seed. I like that he didn’t grow up in a home. He’s a bit of a lone wolf and an outcast and his own people don’t even like him. I really liked that. Even though he steered away from his roots, he’ll eventually probably come back to it and it will find him and accept him as a part of the community. So, that was interesting to me. What was also interesting is that life sucker punches people and you kind of go down a path that isn’t necessarily right and you’re not necessarily bad. Even though you’re not sure if he’s a good guy or bad guy, there are so many gray areas to it and that appealed to me.

African-American actors are often concerned about the type of roles they choose, the type of people they portray, because representation is so rare. Since there are so few representations of Native Americans on television, is that something you had to think about?

It definitely was. Even though it’s a fictional tribe that we’re representing, [they] were inspired by the Ramapough Indians who do not have federal recognition. I think [show creator] Aaron Guzikowski was very inspired by that. And I was very concerned. I went up there to talk to some of the people and I wanted them to know they’re not going to like me. We do represent that tribe. There are people that are good. My wife plays a lawyer that’s representing the tribe. We have many beautiful, smart members, but with every race there’s something bad. I like the idea that they’re not going to like [my character], but no one fucking likes me, my mother doesn’t even like me. There’s a cop [played by Martin Henderson]. What I love is that the show makes the audience question whether or not a cop would cover up a murder to protect his family.

How do you research a fictional tribe?

I wanted to go to [where the actual Ramapough live, 25 miles outside of New York] because my character had been gone for 12 years. I wanted to find that home in my mind and have those images. When Phillip was locked up for six years, he always had this place that he could return to. There’s this peace or whatever that gives him calm. The tribe is based in the forest, and I wanted to have something to call upon. I also wanted to go and talk to some of the tribe members and say, "This is what I’m going to be doing" and let them know that my character is an evil guy. He’s not a good man, so I wanted to make that clear.

I know this is part of an actor’s responsibility, but how do you psych yourself up to play a person that you don’t necessarily like?

That’s a good question! You try to find those parts within yourself … For instance, I was raised by a single mother who loves me. Obviously, this character wasn’t raised by his mother. She left him, and he had a really bad upbringing. Now, coming back after 12 years, there’s a sense he wants community, there’s a sense that he wants to be loved even though he won’t let himself be loved. There’s a longing. So, I can pull upon my relationship with my mother and then subtract that from [Phillip] Kopus. I’m just subtracting that, making that longing.

The second episode of "Red Road" airs tonight. Why do think people should be watching the show?

I’ll put it to you this way: When I read “Game of Thrones” – when I read the book – I could not stop. And when I read these scripts, these six episodes, I burned through the story so fast. That’s sacred. There are developed characters, and it keeps you in the seat. I think after the first two [episodes] open up and we set the groundwork, we light it on fire and it moves. Hopefully it speaks for itself, but that’s why I love it.

You did “Game of Thrones” and “Conan” right around the same time. Were you receiving a slew of those kinds of roles?

I got “Game of Thrones” first and that’s what got me “Conan.”  You know, Drogo and Conan were completely different to me. I played them in totally different ways. I mean aside from not having any clothes on – that was the only similarity. But I try to find things that are new and interesting. It can fall into that sci-fi or fantasy [category] and I would still play it.  It’s just a matter of it being something that interests me.