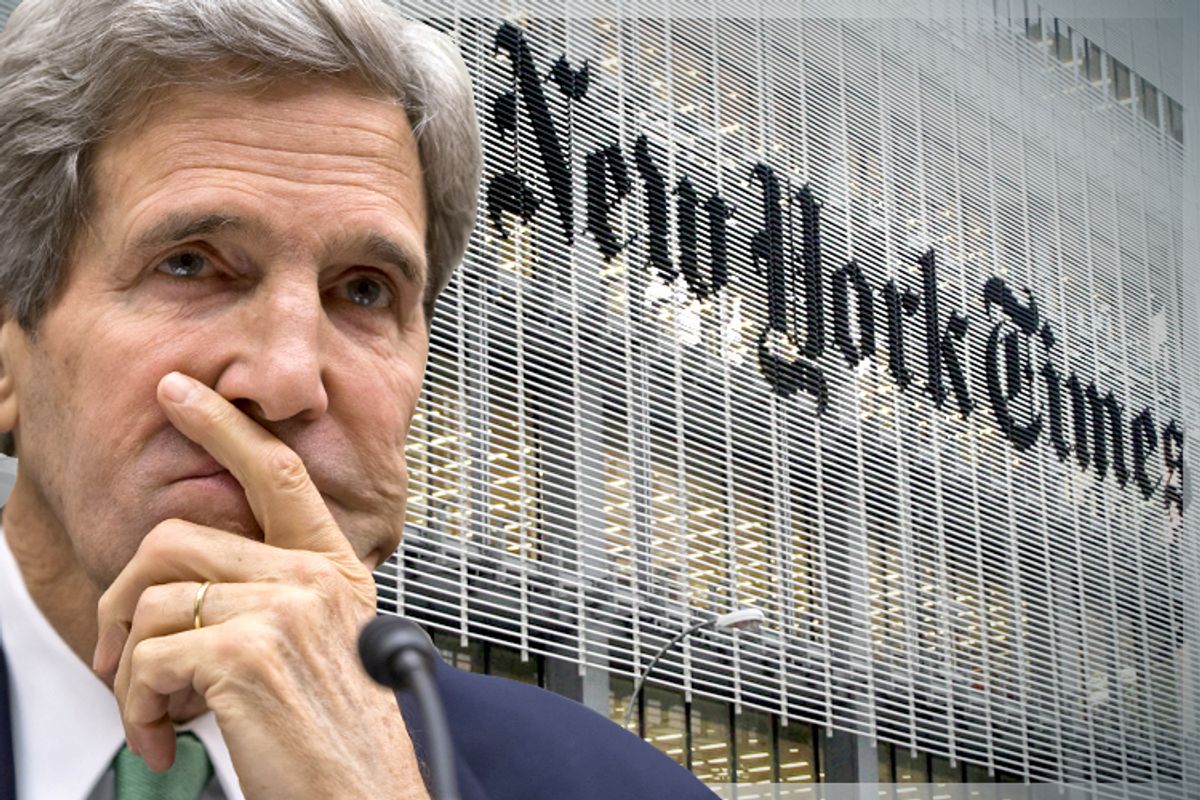 “You just don’t in the 21st century behave in 19th century fashion by invading another country on a completely trumped-up pretext.” Thus spoke Secretary of State John Kerry on NBC’s "Meet the Press" last Sunday, just as Russia took control of Crimea in the latest escalation of the Ukraine crisis.

This extraordinary remark appears to have gone briefly viral. And surely I am not alone in requiring time to recover from the sheer ignorance and presumption of it. Ignorant because even by the standards at State, where the past must evaporate on an almost daily basis, it is hypocrisy unlimited on the very face of it. Presumptuous because it implies a degree of stupidity among us that not even P.T. Barnum would dare take for granted.

We have before us a full-dress campaign to persuade the world that Russian President Vladimir Putin’s military advances into Ukraine this week come as an unwarranted intrusion into the affairs of a nation struggling to find its way to a remade polity on the model of the liberal Western democracies. This is the explicit part. Implicit are the clean hands of American and European policy cliques and the broad approval enjoyed by the provisional government that appointed itself after President Viktor Yanukovych was hounded across the border with Russia two weeks ago.

This is the Good Housekeeping perspective on Ukraine. Kerry’s silly remark last weekend is one among countless in the service of this wholesale rewrite of events.

The unapproved perspective is far more interesting and should be recognized for what it is. For the second time in less than a year we witness an American intervention that, in the age of social media and all the rest, is transparent such that we can actually study it in real time. This is new. In the old days — when Washington undermined Mossadegh in Iran, say, or Arbenz in Guatemala, or even Allende much later in Chile — we had to wait years before the truth was unearthed beneath the macadam road of propaganda and lies laid quickly atop it at the time of events.

I should clarify. The first such occasion was last July, when the New York Times, in what was apparently deemed a one-off slip, provided a record of the telephone call Susan Rice, President Obama’s national security adviser, made to Cairo advising that the generals could go forward with the plan to depose President Mohammed Morsi. Morsi toppled within hours of the exchange.

And to clarify further, a third such occasion may shortly be upon us. This one, if it comes, will be in Venezuela, now ablaze with violent protests. Watch this space and know what you are watching: If the Maduro government in Caracas falls, it will mark the culmination of yet another American intervention.

This makes two, and maybe three, "19th century things" Americans insist upon doing in the 21st century. Not counting Iraq, Afghanistan and threats of violence elsewhere, of course. Please speak into the microphone, Mr. Secretary.

Here is the strange part, or one of many oddities, I ought to say. In all three cases we are offered what evidence of the truth cannot be avoided, and then it is quickly dispatched to oblivion by those laying down the macadam.

In the Egypt case, the Times recounted the Rice telephone call and seemingly never again mentioned it. All it has since written amounts to a game of pretend.

In the Venezuela case, William Neuman, the Times’ man in Caracas (and an intellectually dishonest ideologue), recounted the press conference when the Venezuelan foreign minister read aloud the email traffic revealing the covert American campaign to recruit students to the anti-Maduro cause. And then: Never again did he note it in his accounts of a supposedly spontaneous movement for the neoliberal democracy desired by everyone in the world, Ukrainians, too.

In Ukraine, we have the Victoria Nuland, “F the EU” tape, of course. This is the strangest of all. Amid all the tumult of the past couple of weeks, as the very people Nuland and her ambassador in Kiev were cultivating rose to the top, not a single mention of the tape and the red-handed evidence of American malfeasance. The coverage is all about the unjust intimidations of the Russian Bear, the silent, beady-eyed Putin being the perfect personification of the beast.

The media performance gives so astonishing an appearance of conspiracy at this point that you start to wonder if these people, correspondents and editors alike, are somehow getting dressed in the same locker room every morning. Please use the comment box if you can otherwise explain why not one correspondent finds it useful to cite prima facie evidence of American provocation on Putin’s doorstep.

(It is possible some are filing well from Ukraine and getting politically motivated edits in the newsroom. I know it happens because it happened to me, more than once, when I filed for the International Herald Tribune, a Times property.)

I continue to view ours as a significant moment in post–Cold War history. One way hegemony is sustained is via the maintenance of a powerfully orthodox perspective on events. This has been among the West’s core strengths for half a millennium, and it is crumbling.

The bitter truth, especially difficult for many Cold War survivors, is that Putin’s account of events in Ukraine is more accurate than Kerry’s and Obama’s and the New York Times’. The Russian leader finally shared his thinking during a press conference in Moscow Tuesday. The Times reported it well enough, even as it included in its language all the signals necessary to persuade readers without apparent persuasion that they did not have to take Putin seriously.

Look past those signals and put aside all pre-judgment. I light no candle for Putin, and Moscow’s perspective on Ukraine is flawed. But it has the virtue of leaving less out than what emanates from Washington. It is more complete, accounting for his advance into Crimea as response to a covert program hidden from the people whose taxes paid for it.

Another thing to consider: The government that gave Americans the Monroe Doctrine and makes them live by it after two centuries may condemn Putin’s intrusion into Ukraine, and it is one. Compare it, however, to Obama’s. Hundreds dead in Kiev, to Russia’s no-shot-fired operation. Or think of Egypt: A blood bath after the generals got their go-ahead. Or Iraq, and one hardly need explain.

We have emergent perspectives that start to counter the West’s hegemony over human consciousness, then. This is big stuff, the stuff of historical turns.

We also witness an example of the American narrative’s near-exhaustion. When the American story comes over as hollowly as Obama’s and Kerry’s — read the quotation atop this column again — you have to figure that these guys are tired. Remember how dumb and uninspired the later, post-Khrushchev Soviets sounded as they rote-repeated the nation’s worn-out pieties? Hold the thought and rotate it 180 degrees.

As things now stand, we can also observe the limits of American power as these limits gradually close in on Washington. Enough has been said across the spectrum about how little the U.S. can do to get Putin to back off in Ukraine. Now, as Putin makes known he is prepared to accept a constitutional referendum in Ukraine with elections to follow, it is obvious he is about to take charge of a situation that, supposedly, had left him in defeat just days ago. He may not be the nicest man you have met, but he is magnitudes more the statesman than Obama, Kerryand indeed any of their West European counterparts.

Having written for many years and then taught in journalism schools here and abroad, I have my priorities, my way of seeing things. In the Ukraine case, it is this: We have been saddled with special responsibilities over the last 18 months of interventions, out-of-control surveillance, and an epidemic of mis- and disinformation. Among our responsibilities is to deliver the future with sound accountings of what happened in places such as Ukraine so that when good history finally gets written those writing it can pull up the macadam knowing what they will find underneath it.

Footnote: Can a reader assist in identifying the sayer of the following remark? “Wherever in the world you find a mess, you can be certain the Americans have been there.” Its pertinence is evident. I initially thought Le Carré, then a character in a Le Carré novel. No evidence of either so far. Now I consider Claud Cockburn, the noted Irish journalist of left persuasion during the middle decades of the last century. But again, no citation as yet. And the State Department should know who talks of it in so piercing a fashion.