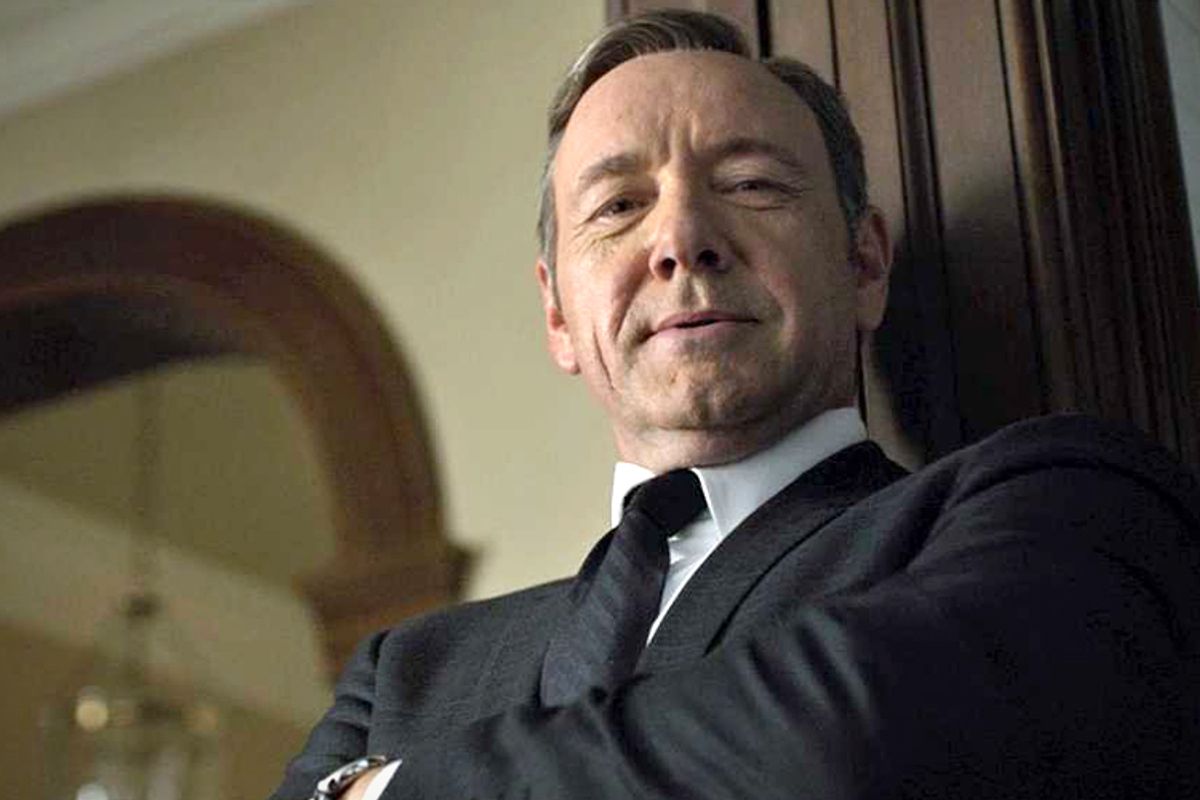 Kevin Spacey as Frank Underwood in "House of Cards" (Netflix)
--

When Peter Russo’s young son bumps into Majority Whip Frank Underwood, causing the statesman to spill his coffee, Frank lets his usually impenetrable mask drop. Until then, we’ve watched Underwood orchestrate his facial expression to manipulate the feelings of others. But at this one unguarded moment, he is furiously, murderously angry, and it shows. “I’ll admit it,” he later spits at the camera. “I despise children.”

With this line, Underwood sets himself up as a new sort of antihero. Like Tony Soprano or Walter White, Frank thrills us with his ability to seemingly get away with whatever he wants, whenever he wants. Enemies? Destroyed. Sexy young reporters? Seduced. Power? Consolidated. But his avowed hatred of children renders him unlike previous antiheroes who wowed us with their violent power grabs, even as they assured us that they were doing it all for the good of the younger generation.

Now, any discerning viewer could see through the excuses these other guys have made. Bad fathers like Walter White or Tony Soprano might indeed love their children, but more often than not their offspring were an abstraction — a stand-in for an amorphous future good -- that allowed them to break the rules that applied to everyone else.  And perhaps we viewers went along with their weak, transparent arguments longer than credulity should have allowed because, as American citizens, we recognized the argument all too well.

The gesture toward children, as both the embodiment of an endangered future and of a larger, communal good, has long helped the bloody medicine go down. Puritan settlers paid lavish attention to the fates of (white) child victims of warfare with Native American groups to justify their own acts of violence and theft.  And the tradition has continued throughout the 20th century. When we have fought bloody wars to make the world safe for democracy, to squash communism, or to wipe out terrorists, we've told ourselves and others that we were doing so to make the world a better place for our children.

Not Frank. When his wife, Claire, wonders about their legacy, he refuses to indulge in the fantasy of future beneficiaries. She wants to know who they are doing it all for. He answers without skipping a beat. “For each other.” He sees no need to justify his own pleasure and power in the name of some amorphous child who is entitled to adult sacrifices for her benefit. As Lee Edelman argued in his foundational work "No Future," hand-wringing over potential harm to “the children” has long been used as a bludgeon to intimidate and punish adult desire, particularly queer desire. And in some ways, Francis Underwood is right in line with Edelman: He has no patience for “the child in whose name we’re collectively terrorized.” Frank is going to do what he wants, for no other reason than it’s what he wants to do.

There’s a key difference, however, between Edelman’s argument and Frank’s philosophy. Edelman invites us to reject the imagined “child” who is conjured to police adult pleasure. Frank doesn’t mind those children at all.  He’s fine with child-symbols that can be wielded to gain power over others. To take just one example, he happily pointed to the body of a murdered child to shame his political opponents into relinquishing their demands.

No, the children Frank hates are the real ones, who spill his coffee, and who want food and care and education, all without adding a thing to the bottom line.

In a show obsessed with politics, Frank Underwood’s Machiavellian adventures invite us to return to some of the founding narratives of how power can and should be wielded. If we don’t submit to some sort of government, Hobbes has famously argued, life tends to be “nasty, brutish and short.”  To avoid such a fate, philosophers like John Locke, Jean-Jacques Rousseau and others argued that our ancient ancestors engaged in a social contract in which the immediate gains of theft and pillage were deferred for the long-term benefits of communal assistance and protection. But as Martha Nussbaum and others remind us, contract theory only works if both parties can bring something to the contract. If you can’t take my stuff, or make it worth my while to leave your stuff alone, we’ve got nothing to talk about.

And this, I suggest, is why Francis Underwood hates children. They bring very little to the bargaining table. They lack the power to level any real harm — hell, they can’t even vote! — and the ability to confer any favor that Underwood might find valuable. And Frank isn’t alone. As much as we may tell ourselves other stories, many Americans aren’t too fond of actual children either.

Just as Frank Underwood will happily deploy the image of a murdered child to win a battle with teachers' unions, our Congress conjures images of  future children endangered by an unbalanced budget, even as they attack the unemployment and SNAP benefits that put food in the mouths of actual children.  We have the worst child mortality rate of any wealthy Western country; we suffer one out of every five children in this rich country to live in poverty; and we do nothing in the face of 7,000 children gravely injured by gunfire each year. We routinely begrudge spending money on public education, on childcare or on health measures. Our CEOs decry the toll that “distressed” babies take on the bottom line.  Of course, we hate children too.

As the U.S. slips in terms of both power and influence throughout the world, we’ve become increasingly disdainful of the powerless. Frank's lack of patience for those who can neither offer a favor nor pose a threat renders him a hero for the post-American century. And his open disdain for children renders him a dishearteningly apt embodiment of a nation that’s too cynical and too battle-weary to come up with noble platitudes for the violence we wreak in order to get what we want.