Paul Krugman bashes Paul Ryan for yet another "con job" 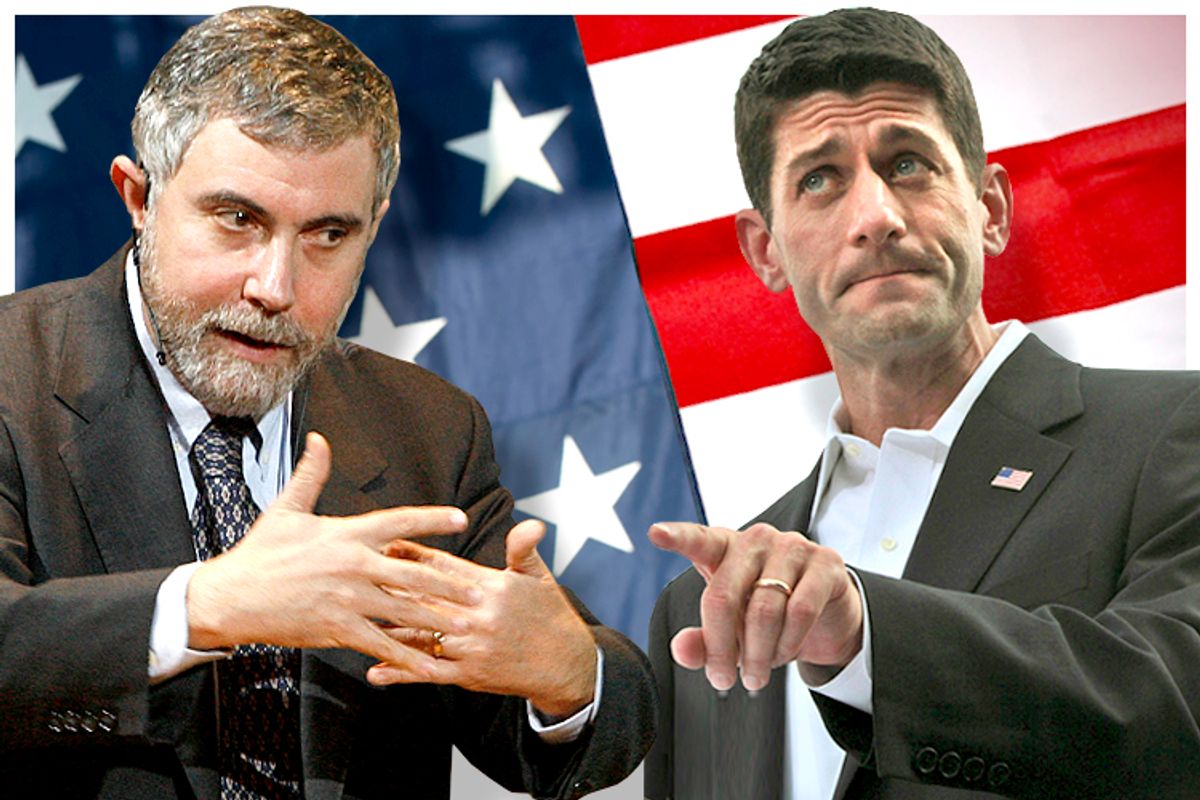 It's been a while since the New York Times' premiere liberal columnist, Paul Krugman, had reason to flay one of his favorite targets, chief GOP wonk and former vice-presidential candidate Paul Ryan. But with the GOP suddenly talking about how much it wants to help America's poor — a development Krugman calls "fake compassion" — the award-winning economist and best-selling author once again has a reason to take Ryan to the woodshed.

In his latest column for the Times, Krugman writes that while Ryan's new attack on liberalism — a lengthy report, supposedly on the efficacy of government-funded anti-poverty measures — is less of a sham than efforts from years past, the Wisconsin congressman has still ultimately produced "a con job."

Krugman applauds Ryan for "citing a lot of actual social science research" but insists that the GOPer has falsely represented the conclusions of most of the research he cites. "In some cases," Krugman writes, "Mr. Ryan and colleagues outright misstate what the research says, "drawing outraged protests from a number of prominent scholars about the misrepresentation of their work."

But where Ryan's report really goes wrong, Krugman argues, is in its ideological assumptions — chiefly, its unexamined belief that anti-poverty measures make the poor lazy and drain them of their ambition. "Mr. Ryan would have us believe that the 'hammock' created by the social safety net is the reason so many Americans remain trapped in poverty," Krugman writes. "But the evidence says nothing of the kind."

More from Krugman at the New York Times:

After all, if generous aid to the poor perpetuates poverty, the United States — which treats its poor far more harshly than other rich countries, and induces them to work much longer hours — should lead the West in social mobility, in the fraction of those born poor who work their way up the scale. In fact, it’s just the opposite: America has less social mobility than most other advanced countries.

And there’s no puzzle why: it’s hard for young people to get ahead when they suffer from poor nutrition, inadequate medical care, and lack of access to good education. The antipoverty programs that we have actually do a lot to help people rise. For example, Americans who received early access to food stamps were healthier and more productive in later life than those who didn’t. But we don’t do enough along these lines. The reason so many Americans remain trapped in poverty isn’t that the government helps them too much; it’s that it helps them too little.

Which brings us back to the hypocrisy issue. It is, in a way, nice to see the likes of Mr. Ryan at least talking about the need to help the poor. But somehow their notion of aiding the poor involves slashing benefits while cutting taxes on the rich. Funny how that works.